A rundown of writerly tidbits both amusing and horrifying 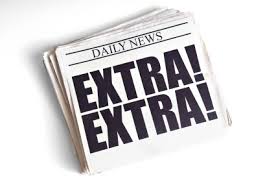 I’ve been collecting stories and articles for a rainy day, which here in Southwest Florida has been rare of late. That’s a problem for a writer. Why? Because unless I shut my blinds or retreat to a bathtub to write, I am constantly distracted by people walking by my windows carrying golf clubs, tennis racquets, or fishing rods on their way to an enjoyable day in the blasted sun.

And I have to tell you, the occasional bikini doesn’t help.

Well it’s sunny outside (of course), but I’m a tad late with my column and I don’t want to disappoint my editor, Holly, who I understand waterboards tardy bloggers. So I’m going to use some of my rainy-day stuff, with probably inappropriate commentary.

“People already read James Patterson’s books — and in staggering numbers. Last year, he and his team of writers had 36 books land on the New York Times best-seller list. To date, he has published 156 books that have sold more than 325 million copies worldwide. But Mr. Patterson is after an even bigger audience. He wants to sell books to people who have abandoned reading for television, video games, movies and social media. In June, Mr. Patterson will test that idea with BookShots, a new line of short and propulsive novels that cost less than $5 and can be read in a single sitting. Mr. Patterson will write some of the books himself, write some with others, and hand pick the rest. He aims to release two to four books a month through Little, Brown, his publisher. All of the titles will be shorter than 150 pages, the length of a novella. [Patterson wants] to colonize retail chains that don’t normally sell books, like drugstores, grocery stores and other outlets. They envision having BookShots next to magazines in grocery store checkout lanes, or dangling from clip strips like a bag of gummy bears.” The article also points out that there have been many great short novels: John Steinbeck’s Of Mice and Men; F. Scott Fitzgerald’s The Great Gatsby; and Truman Capote’s Breakfast at Tiffany’s.

Okay, I get it. We have to motivate people to read. Not a bad thing. But do we have to treat books as a commodity? Or candy? And compare “a team of writers” who churn them out to Steinbeck, Fitzgerald, and Capote? Just between us, I’d rather be “colonized” by Ebola.

An open letter to members of the Association of American Publishers from the Authors Guild, January 2016:

“Unfair terms in publishing agreements negatively affect authors’ incomes and even their ability to write at all. That’s the conclusion the Authors Guild’s Fair Contract Initiative has repeatedly demonstrated. What we demand is simple: Publishers need to revise many of their standard contract terms to make them more equitable. Authors should get at least 50% of net e-book income, not a mere 25%. They should not have their hands tied with non-compete and option clauses that can make it impossible for them to write new books without delay. They should not be forced to accept royalties that can decline by 50% when the publisher cuts its wholesale price by a single cent. They should be able to get the rights back when the publisher stops supporting a book.”

I had a hard time wrapping my head around this one. In fact, I had to read it several times. It’s not that I disagree. Au contraire. I agree wholeheartedly. It’s just that this is the argument major Amazon e-book writers have been making for years — while the Authors Guild has been savaging them and “monopolistic” Amazon for allegedly destroying “legacy” publishing revenues. Now it turns out that the guild agrees that its authors have been subject to inequitable contracts! Legacy publishers still make plenty of money, but it’s not passed on to the folks who write the books. Amazon brought competition to the publishing cartel and traditional authors are beginning to realize who the real culprits are.

Only 40 Self-Published Authors Are a Success, says Amazon (I got this off the Internet recently. I lost the citation. No surprise; I just returned from a trip to Miami, where I had to buy clothes and sundries because I left my bag at home. Too much sun):

“The cat is out of the bag; finally we know exactly how many self-published authors make it big: 40. Yes, that’s not a typo; 40 self-published authors ‘make money,’ all the others, and they number in the hundreds of thousands, don’t. This interesting statistic, recently revealed in a New York Times article, applies to the Kindle Store, but since Amazon is in fact the largest digital publishing platform in the world, it is a safe bet that self-published authors are not doing any better elsewhere. ‘Making money’ here means selling more than one million e-book copies in the last five years.”

Certainly is an interesting statistic, and like many statistics, it means absolutely nothing. Would most authors like to make six- or seven-figure incomes? Sure. Some of the richest “authors” even hire a team of gummy bears, I mean writers, to help them do it. But are self-published authors who earn a few thousand a year doing what they love failures, especially when they have a closet full of rejection slips from traditional publishers?

Hell, if you make enough extra cash to buy new golf clubs, what’s the problem? Even if those clubs never leave the garage because you’re too busy writing.

Lawrence De Maria, once a Pulitzer-nominated New York Times reporter, and most definitely a team of one, has written more than a dozen thriller and mysteries on Amazon.com. His most recent mystery, Turtle Dove, is available at ST. AUSTIN’S PRESS (BOOKS BY DE MARIA).