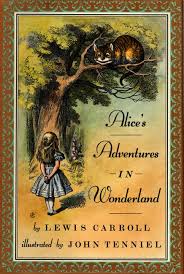 Let us now praise Alice. That is, Alice’s Adventures in Wonderland, that masterpiece of English literature written by Lewis Carroll (the pseudonym of Charles Lutwidge Dodgson), first published in 1865.

To mark the sesquicentennial, the University of Maryland at College Park’s Hornbake Library is hosting an exhibition, “Alice 150 Years and Counting…” Along with a facsimile of “Alice’s Adventures Under Ground” that Dodgson hand-wrote and illustrated for Alice Liddell, the little girl who was the inspiration for Alice, the exhibition features a wide range of books, illustrations, and ephemera that attest to the profound, worldwide influence of the book and its sequel, Through the Looking-Glass and What Alice Found There.

Because, really, besides the Bible and Shakespeare’s plays, did ever a book have more impact on popular culture than Alice’s Adventures in Wonderland?

Take, for instance, the many phrases from the books that have entered the general lexicon: “down the rabbit hole” (the title of a book by Holley Madison, a former Playboy bunny; a movie, based on a play, starring Nicole Kidman; a song by Adam Lambert; and shops, bars, restaurants, and other places of entertainment throughout the world); “curiouser and curiouser”; “EAT ME”; “DRINK ME”; “’Twas brillig and the slithy toves…”; “The Queen of Hearts, she made some tarts, all on a summer day: The Knave of Hearts, he took those tarts, and stole them quite away!”; “stuff and nonsense”; and, of course, “Off with her head!”

Also consider the internationally recognized Alice characters that need no introduction, annotation, or explanation: the White Rabbit, the Mad Hatter, the Cheshire-Cat, the hookah-smoking Caterpillar, Tweedle-Dee and Tweedle-Dum, and Alice herself.

Certainly, for me, Lewis Carroll’s books made an indelible impression on my young mind, writ in fat Sharpie on the blank slate of my imagination. They say you always remember your first love, and Alice’s Adventures in Wonderland was the first work of literature that I fell in love with. Sure, there are many children’s books that I treasure, but Carroll’s work was the one that revealed to me that reading was for more than just pleasure and that literature was an art form.

Perhaps there was a bit of narcissism involved, as the little girl who chases the White Rabbit on a lazy summer’s day is named Alice. But don’t we often look for ourselves in a story, identifying with those characters in whom we see ourselves or whom we wish to be?

And how curious, almost radical, to have a little girl as the fearless protagonist. Most adventure tales of that era, and for many years afterward, featured boys. Alice was an early feminist role model: She didn’t mind getting her clothes dirty, wasn’t intimidated by the various imperious and bossy creatures she encountered, sought justice for the downtrodden, and didn’t take crap from anyone. When the Queen sentences her to death, she sneers, “You’re nothing but a pack of cards!”

As the plethora of translations on display in the University of Maryland exhibition attests, the story has universal appeal, speaking to children from Italy to India, China to the Czech Republic. Those readers may not play croquet or eat jam tarts, but they recognize the surrealism that permeates childhood, when sometimes you feel big and sometimes small; you often wonder, as Alice does, “Who am I?”; adults don’t always make sense but always act as if they do; and you know what it’s like to cry so much you feel like you might drown in your own tears.

Even proto-plotter Shakespeare didn’t come up with Carroll’s now much-copied plot device wherein it all turns out to be just a dream.

Because of the power of the story over our collective imagination, famous artists from Salvador Dalí to Ralph Steadman have been inspired to illustrate it. The book has been interpreted in every possible art form: dance, theater, film, performance art, symphonic music, rock and roll, opera…

Sometimes, the narrative is slightly altered, as in a recent performance by the Synetic Theater which introduced a nasty nanny who reappears as the Queen. The modification seemed unnecessary — a little tinkering to make the playwright feel useful — as the original story is perfect and need not be meddled with.

Even the all-mighty Walt Disney Company could not colonize Alice. Though a Disney cartoon was made in 1951, it has not replaced the book in the public imagination, as Disney’s versions of Snow White, Sleeping Beauty, Cinderella, Mary Poppins, and Peter Pan have.

Alice’s Adventures in Wonderland has continued to delight me into my adult years, long after I stopped reading it to my own children. I return to it for inspiration, entertainment, and a writer’s guide on what makes a masterpiece of literature: the heroic journey of a strong and unique main character; a cast of colorful supporting characters; a simple yet compelling plot; crisp prose that is rife with witty wordplay and ticklish with the paradoxes of the English language; a critique of society that does not wallop you over the head and strangle all joy from the story; and unforgettable scenes that resonate in the reader’s imagination throughout her lifetime.

Maybe, someday, that reader will name her blog in honor of the book that led her down the rabbit hole into the world of the art of literature.