Comic-book panels, the stanza, and time 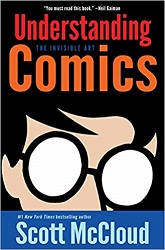 Sometimes, poets will suggest as a revision strategy to “play” with line breaks or stanza breaks, by which they mean alter or rearrange the shape of the poem. What is sometimes missing from those suggestions is how to play and by what method one should rearrange.

While all creative writing retains a dimension of the intuitive, I think writers should strive to be imaginative in how they build frameworks of intuition and play that can be shared, taught, or explored with others. That’s what Nerd Volta is all about: Comic-book theory and the relationship between the comic-book panel and the stanza offer a new threshold to start the process.

In poems, stanzas are one category larger than the fundamental poetic unit of the line, and therefore are vital to a poet’s craft. The word stanza derives from an Italian word which can be translated as “room” or “station,” A spot of rest. A place of preparation to enter or exit the larger world. A last check to see what has been forgotten. Time slows down when standing or sitting in a room one enjoys.

This also seems true in poems. As these rooms connect to and expand on one another, the poem brings readers closer to exploring the house of their deeper emotions, or the poems reassures readers as they leave the confines of the individual self and enter the broader collective imaginations of history and society. So how a reader crosses those thresholds is where all the creative juice lies.

The comic-book panel has a stanza-like shape on the page and offers a similar approach to experiencing a sense threshold and a different perception of time. In his groundbreaking text, Understanding Comics, illustrator and comic-book theorist Scott McCloud explains that, in comics, space equals time. Elongate the size of a panel, and the reader’s sense of duration increases, as well.

In the first panel, we see a person sleeping, perhaps snoring. In the second, we see the same image, but it feels like the snoring has a longer duration. The only significant change is in the width of the panel. The zzz’s echo out in the increased space. So, the shape of the panel helps to curate a reader’s sense of time passing within the borders of the panel, but time also passes between the panels, in the white space commonly referred to as the gutter.

In poems, there are parallel dynamics. Line breaks and stanza breaks have a similar function as the comic-panel gutter. Those small fissures in the poem enact small moments of suspense, but also make a demand on a reader’s imagination to fill in the gaps of what isn’t written.

Sometimes, the poem leaps in time, or in place, or in subject matter. A reader is given something to experience and then something to anticipate. Poets, whether drafting or revising, can guide and craft that anticipation using ideas from how comic-book panels transition.

McCloud writes that there are six types of panel transitions in comics:

1. Moment to Moment. Eyes open in one panel, eyes shut in the next. A small duration of time.

2. Action to Action. A “single subject in distinct action to action progression.” Across three panels, a person opens a candy bar, raises it up, and bites it vigorously. A-B-C.

4. Scene to Scene. This requires a more substantial leap in time and physical distance. Think of the “Meanwhile, back at the ranch” transitions on television. Makes use of deductive reasoning.

5. Aspect to Aspect. What McCloud calls “the wandering eye.” The camera lens of the panel moves to “various aspects of a place, idea or mood.” Think a panel of sunshine, a panel of a clear babbling brook, a panel of a bee on a flower: all aspects of spring or nature.

6. Non Sequitur. The relationship between the panels isn’t logical. For example: a panel of Santa Claus followed by a panel of a spork in spam.

Now, what if a poet, in thinking about how to craft and move one stanza into the next, also adopted this framework, naming the operations in the white space between stanzas? Not only would there be practical revision opportunities in how one arranges the stanzas, but also generative opportunities as the poet drafts his or her poem.

Consider the first three stanzas of “Artless” by Brenda Shaughnessy:

is my heart. A stranger
berry there never was,
tartless.

Gone sour in the sun,
in the sunroom or moonroof,
roofless

No poetry. Plain. No
fresh, special recipe
to bless.

But the next transition, between the second and third stanzas, ties the metaphors together using an aspect-to-aspect transition. Such transitions rely on association, some version of, “You say winter, I say snow.” Here, the poet writes “sunroom or moonroof, / roofless” and makes us associate those aspects with a lack of poetry.

The poem uses an aspect-to-aspect transition inside of a stanza break instead of using a simile. And because the closure and connecting happens without explicitly stating it, it lingers in the imagination and intensifies. It’s the way, McCloud writes, “If you kill someone between panels, you kill them forever.” Something to read; something to imagine. Entering and exiting.

Or, as another example, the beginning of “Hulk” by Alan King:

They tremble
as if I’m a defect.

Where I’m going,
I never know,
I get the urge and go.
That’s freedom.
I forget that

because I’m black,
this late hour says
I’m up to no good,

All of this takes place within the same larger setting and doesn’t shift too far in time. Subject to subject to subject. The consistency in the type of transition allows for the stanza break to be received smoothly, while supporting the narrative that’s building in the consciousness of the poem’s persona. The poem uses a sustained structure that builds towards closure at the end.

Both stanzas and comic-book panels help to organize and orient our imaginations towards depth and expansion. Imagery anchors them both, but so does the visual grammar of comics, which poets can add to their ever-expanding toolbox. “Make it new,” the saying goes. Maybe this is a step in the right direction.

Celebrate more than you want to be celebrated.