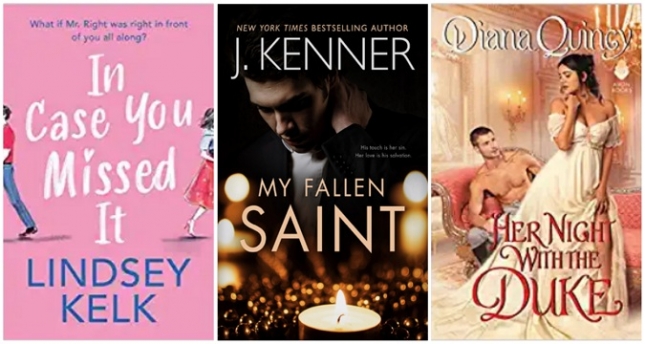 September brought the return to (virtual) school and the first glimpses of fall weather in Virginia — which means I’ve already eaten more apple crisp than any one woman should. This month, I read three fabulous romance novels that were as different as autumn’s changing leaves. From a romcom that made me LOL, to a sizzling tale of danger and intrigue, to a delicious #OwnVoices Regency romance, these are the books I enjoyed this month.

I have a soft spot for British romantic comedies, and Lindsey Kelk’s In Case You Missed It (HarperCollins) hit it perfectly.

Ros returns to London after a few years in America and discovers that everyone has moved on with their lives — including her parents, who are busy rekindling their romance. Relegated to the garden shed and stressed over her new job, Ros sends a group text to her friends to let them know she’s back and ready to reconnect. The only problem is, her ex-boyfriend Patrick gets the text, as well, and seems ready to pick up where they left off before their breakup.

John, a bartender who has joined her circle of friends and maybe has more insight into Patrick than Ros would like to admit, tries to warn her off. Her close friends have never liked Patrick, either, but Ros is too caught up in a wave of nostalgia to take heed. She’s starting her life over while clinging to the familiar — which may not be the best thing to do, all things considered. Sometimes, second chances aren’t romantic at all, they’re just another chance to make a horrible mistake.

Ros is an incredibly likable heroine despite her misguided attempts at recapturing the past. She eventually sees the light of day and ends up with the right man — who has his flaws but is also sexy, funny, and honest. Kelk writes the most fabulous secondary characters, and the U.K. setting is just icing on this delicious and charming tale.

Before she was even grown, Ellie Holmes lost everything that mattered to her, including her first love, Alex. Ellie put Laguna Cortez in her rearview mirror 10 years ago. For good, she thought. But now she’s back in her hometown, and her troubled past is about to collide with her present in ways she can’t imagine.

Devlin Saint is a man who plays things close to the vest. He turned his inheritance into unimaginable wealth that he used to create a successful international philanthropic organization. But there is more to Devlin than meets the eye, including a criminal past that no amount of money, power, or good deeds can erase. Ellie is a temptation Devlin can’t resist — and one he knows he shouldn’t indulge, for both their sakes.

Ellie lives for danger and is determined to peel away Devlin’s carefully constructed veneer in order to get to the real man beneath the polished image. Devlin is the key to her past, but the truth may very well break the tenuous bond they have formed.

My Fallen Saint is a fantastic start to this exciting new series. Kenner has created a fast-paced story packed with danger, intrigue, and passion between two characters whose pasts are inextricably linked. Devlin and Ellie are perfect together, each bringing out the best (and sometimes the worst) in each other. But before they can get their happy-ever-after, they have to be able to trust and put the past behind them.

In Her Night with the Duke (Avon), Diana Quincy kicks off a new Regency series with an adventurous heroine and a memorable one-night stand.

Lady Delilah “Leela” Chambers, countess of Devon, is a widow of Middle Eastern heritage who has never been welcome among 19th-century London society. Since her husband’s death, she has spent her time traveling and writing about her adventures, happy to have her freedom. She is back in England after two years in Arabia with her mother’s family when she gets caught in a rainstorm and has to spend the night at a country inn.

Elliot “Hunt” Townsend, duke of Huntington, is on the way to visit the woman he is planning to marry when he is caught in the same storm. The attraction between the spiritied young widow and the irresistibly handsome duke leads to a singular night of passion, with neither of them expecting to see the other again.

Of course, they are reunited in the most awkward of ways when it turns out Hunt’s betrothed is Leela’s stepdaughter, Tori. Leela and Hunt do their best to stay as far from one another as possible, but their one memorable night has only served to whet their appetites for more. Hunt’s practical choice of a bride turns out to be a mistake, but will he be willing to throw caution (and societal expectations) to the wind for the sake of Leela’s love?

Quincy’s own Middle Eastern heritage informs her writing, and she delivers a richly detailed story about an Anglo-Arab woman determined to make her way in the world on her own terms. Her Night with the Duke is a standout in the Regency romance genre and a promising beginning to Quincy’s new Clandestine Affairs series.