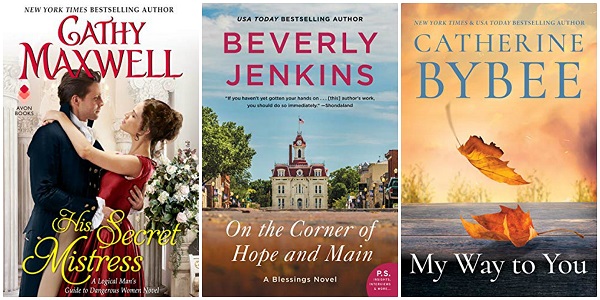 This month’s roundup brings the first book in a new historical romance series, the 10th (!!) in a beloved small-town series, and the first in a contemporary romance series set in California.

Cathy Maxwell breezes into spring with His Secret Mistress (Avon), the first book in the Logical Man’s Guide to Dangerous Women trilogy. The Logical Men’s Society is a group of men committed to the idea of, well, staying uncommitted. Among its senior members is 36-year-old Bran Balfour, an architect still wounded by a youthful heartbreak and determined to avoid the bonds of matrimony. He’s also protective of his ward, the young Duke of Winderton, who’s become infatuated with an actress several years older than him.

Enter the talented and beautiful actress Kate Addison, who once shared a brief but passionate interlude with Bran, only to be devastated by his betrayal. She is shocked by his reappearance in her life but refuses to be intimidated into leaving town. With each of them believing they have been wronged, it takes some time for Kate and Bran to sort out the events of the past — and what it means for their future.

Set in Regency England in the aptly named village of Maidenshop, His Secret Mistress features a bold heroine who has fought hard to achieve her independence, and a hero dedicated to his work and family but who still carries a torch for the woman who won his heart 15 years ago.

The back-and-forth between Kate and Bran is a treat, as are the secondary characters, whom we’ll certainly see again in future installments. Maxwell has crafted a delightful reunion story that will please her devoted readers and is sure to win her new fans.

Beverly Jenkins is back with the 10th book in her Blessings series. Set in the small town of Henry Adams, Kansas, On the Corner of Hope and Main (William Morrow) is everything we’ve come to expect from this lovely small-town series.

This time around, the story centers on a mayoral race that’s shaking up the close-knit community. The town’s current mayor, Trent July, is stepping down, which creates a flurry of interest in the election — and divided loyalties. As a result, conflicts between friends, neighbors, and spouses arise.

When hometown hero Colonel Barrett Payne decides to run, he fully expects his wife, Sheila, to support his campaign. But Sheila, still reeling from Barrett’s infidelity, takes a stand and decides to throw her own hat into the ring, despite a lack of experience.

Meanwhile, Bernadine Brown, the town’s resident matriarch, is trying to keep everyone on an even keel while dealing with her own issues. Her ex-husband is back in town and acting as one candidate’s campaign manager, but she suspects his intentions are less than honorable. She’s also still sorting her complicated feelings for her lover, Malachi July, a recovering alcoholic whose betrayal has deeply wounded her. Can Mal make amends for his past bad behavior and get them on a path to happiness?

Jenkins’ women-centered storylines and strong female characters make On the Corner of Hope and Main shine. New readers will appreciate the fair amount of backstory she includes, but may still get a little tangled in the multiple storylines and ensemble cast. Longtime fans of the Blessings series will be delighted with this new installment and the fact that the author shows no signs of ending it anytime soon.

Taking inspiration from her own experiences with California’s wildfires, Catherine Bybee kicks off her new contemporary series, Creek Canyon, with the riveting My Way to You (Montlake).

Following their parents’ death two years ago, Parker Sinclair gave up her own dreams to look out for her younger sister and brother and manage the family’s property. It’s a job that consumes her life, but Parker has managed okay on her own — until a wildfire ravages the forests surrounding their property and nearly destroys their home.

Now, with winter approaching, they’re facing the threat of mudslides. Parker is in over her head and knows it, but she’s also a bit of a control freak, which makes it hard for her to ask for, or accept, outside help.

Colin Hudson is a public works supervisor in charge of creating two temporary dams on the Sinclair property to help protect the house and the nearby community. His job puts him in close contact with Parker because the base of operations is necessarily on her property. A mutual attraction develops even as the two butt head, with Parker resisting Colin’s interference in her life, even while Colin is just trying to look out for her and do his job.

Fans of disaster stories will love the way Bybee weaves realistic details throughout the budding romance. It takes some time, and a lot of communication, but Parker and Colin are not so different from each other. Their heartwarming relationships with their families and their dedication to taking care of others create a solid foundation upon which to build a romance.

Bybee’s Creek Canyon series is off to a terrific start. My Way to You is beautifully rendered, showing the power of Mother Nature to wreak havoc on our lives — and the power of love to heal the destruction.