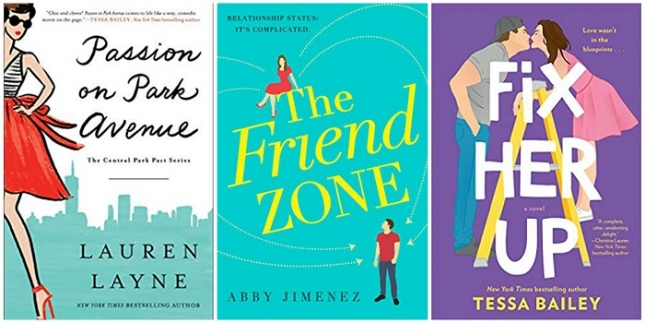 It’s July, and at my house that means lazy days by the pool, barbecues with friends, and new books. (Actually, every month means new books at my house.) This month, I read a trio of contemporary romances that wowed me with their multi-dimensional main characters, realistic portrayals of female friendships, and compelling storylines.

Lauren Layne’s Passion on Park Avenue (Gallery Books) is for anyone who loved The Devil Wears Prada. (Me, me, me.) Naomi Powell grew up in the Bronx and has spent her adult life proving her worth to the wealthy people who looked down on her family. Her passion for fashion inspired a career in accessories, and now she’s CEO of a billion-dollar jewelry corporation.

When Naomi interviews for a Park Avenue co-op that her late mother had applied for in her name, she comes face-to-face with Oliver Cunningham, the son of the man her mother once worked for. Oliver doesn’t remember Naomi or her mother, but Naomi remembers how he teased her as a child, and how his father fired and blacklisted her mother.

Despite her lingering resentment, Naomi is attracted to Oliver, who isn’t at all like the boy she remembers. Things take an unexpected turn when she learns Oliver’s father has Alzheimer’s and she finds herself impulsively volunteering to help him.

Naomi is a powerhouse on her own, with enough drive and ambition to conquer the world, but she also has a poignant vulnerability that makes her a likable leading lady. Oliver nicely complements her, having grown from the spoiled rich boy she despised into a thoughtful, compassionate man she can respect and love.

Layne’s new trilogy is off to a great start with Passion on Park Avenue. This is a frothy, sexy, enemies-to-lovers story that offers unexpected emotional depth, sizzling sex, terrific secondary characters, and thoughtful commentary on issues of class privilege and elder care.

The Friend Zone (Forever) by Abby Jimenez is a debut rom-com delight and one of my favorite books of the year! Kristen Petersen and Josh Copeland’s meet-cute starts with a fender bender and continues when they learn their best friends are engaged to be married.

Kristen is a feisty, strong-willed woman with a sarcastic mouth and a tender heart. Josh is cute, hot, and her perfect match in every way — even her dog, Stuntman Mike, likes him! The heat between them is irresistible, but she has a deployed military boyfriend and reluctantly puts Josh in the friends-only category.

When Kristen’s long-distance relationship ends, she finally gives in to her attraction and sleeps with Josh. She still won’t consider a relationship with him because of a painful secret — she needs a medical procedure that will prevent her from being able to have children. She thinks Josh would be better off with someone who can give him the big family he wants.

A tragedy casts their friendship and attraction in a different light, with Josh determined to win Kristen over. He knows they are meant to be together no matter what life throws at them, and he’s willing to do the work to make it happen.

The Friend Zone is a charming, emotional, and utterly romantic tale that deals with real-life issues in a compassionate and believable way. This is a fantastic debut, and Abby Jimenez is a promising new writer to watch.

Tessa Bailey’s Fix Her Up (Avon) takes a familiar romance trope and gives it a refreshing makeover. Georgie Castle has made a name for herself professionally, but she can’t get her family to take her seriously. She concocts a plan to pretend to be in a relationship with her brother’s best friend to help him land his dream job and convince her family she’s not a kid anymore.

A career-ending injury has broken the spirit of Major League Baseball player Travis Ford. He moves back to his hometown to lick his wounds, sinking deeper into depression as he contemplates his future. Georgie has known Travis since they were kids, and she’s determined to help him regroup and get his life on track. She’s had a crush on him forever, but he’s always seen her as his best friend’s little sister. Until now.

Travis’ reputation as a major player off the field might not have affected his career on it, but it threatens a potential new career as a broadcaster. So, Georgie’s fake-relationship plan seems perfect for both of them. The wrench in the works is that Georgie’s school-girl crush has developed into full-fledged attraction — and it’s very, very mutual.

Fix Her Up is the sexy rom-com I didn’t know I was waiting for. Its secondary characters are endearing, the sex is sizzling, and the female friendships are empowering. Tessa Bailey has hit a homerun with a big-hearted novel that takes the fake-marriage plot and turns it into something delightfully original.

Kristina Wright lives in Virginia with her husband, their two sons, a dog, a new puppy, a cat, and a parrot. She’s the digital editor of Your Teen Magazine and a regular contributor to BookBub. Her work has appeared in a variety of publications, including the Washington Post, USA Today, Cosmopolitan, and more. Find her on Twitter at @kristinawright and tell her what you’re reading this summer!