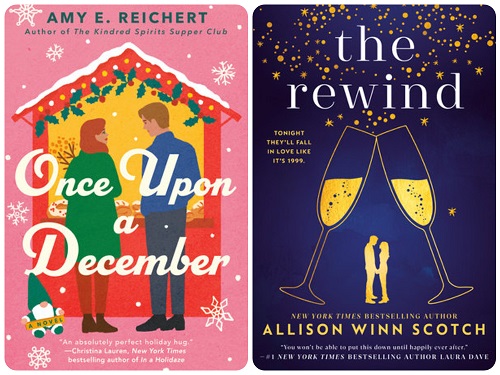 I love reading books that correspond with the current season, but I have a particular passion for snowy winter romances. I think it’s because I grew up in South Florida, and even all these years later, the first snowfall of the year still makes me giddy. Here are a couple of holiday romances — one Christmas, one New Year’s Eve — to wrap up 2022 in hopeful, romantic style. Happy holidays and happy reading!

Amy E. Reichert delivers the Christmas romance of the season with Once Upon a December (Berkley Romance).

Astra Noel Snow’s annual visit to the Milwaukee Christmas market is a chance to forget about her painful divorce (and the custody fight over her dog) and enjoy a little holiday magic with her friends. Julemarked, as it’s known, is even more magical than Astra realizes. It’s always December in this enchanted market that travels around the world, reappearing in a different location each December 1st.

Jack Clausen lives and works in Julemarked alongside his family and friends. He’s gotten to know Astra over the past 15 years, but she has no memory of him. That’s part of the magic of Julemarked: Once it vanishes on Christmas, everyone who has visited forgets it exists. So as Jack has become increasingly smitten with Astra, she meets him anew each year. But this year is different.

Astra is a relatable, dog-loving heroine looking to drown her sorrows in Jack’s delicious kringle (a sweet, flaky pastry filled with fruit and topped with icing). But this year, her encounter with Jack holds the promise of romance — and perhaps a future. Jack and his beloved Julemarked are utterly charming, but can he convince Astra to stay with him before time runs out? Or will they go their separate ways as Christmas comes and Jack is whisked away?

For readers who loved Reichert’s ghostly The Kindred Spirits Supper Club, Once Upon a December is a don’t-miss holiday treat.

The Rewind (Berkley Romance) is a dazzling second-chance romance from Allison Winn Scotch — and it’s been optioned by Netflix to be developed as a feature film!

A decade after their bitter breakup right before graduation, former sweethearts Frankie Harriman and Ezra Jones are reunited in their Massachusetts college town to celebrate their mutual friends’ wedding. It’s New Year’s Eve 1999, and Frankie, a former piano prodigy who is now a music manager for big-name bands, and Ezra, a wealthy game designer who’s planning to propose to his girlfriend, just need to tolerate each other for a little while. Instead, they wake up together wearing wedding bands, with no memory of what happened the night before. Now, they must sort out what transpired.

As they walk around campus, Frankie and Ezra piece together their fractured memories and contemplate their rocky past. Did they make a mistake breaking up as they did, and is this the universe’s way of righting things? Revisiting their history allows them to address the issues that drove them apart in the first place, but can they fix the mess they’ve made — then and now — in just 24 hours?

Filled with 1990s pop-culture nostalgia and the perfect snowy New England setting, The Rewind is a story of two people who have built seemingly successful lives but are still trying to figure out who they are and what they really want. This is the Y2K new-millennium story I didn’t know I needed.

Kristina Wright lives in Virginia with her husband, their two sons, a dog, a cat, and a parrot. She’s a regular contributor at BookBub and a lifelong fan of romance fiction. Find her on Twitter at @kristinawright or on Bookshop, where she features other book recommendations.