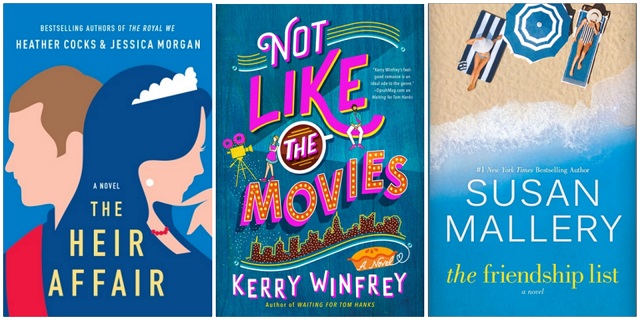 The temperatures have been in the 90s for the past couple of weeks here in Virginia, which means two things: I’m already counting down until crisp, cool autumn days arrive and I’m spending as much time as I can reading in the comfort of my air-conditioned house. Here are some of my favorite romance reads this month!

With The Heir Affair (Grand Central Publishing), Heather Cocks and Jessica Morgan deliver a rollicking royal follow-up to their 2015 debut, The Royal We. When we catch up with the royal family, American Rebecca “Bex” Porter is marrying her Prince Charming, Prince Nicholas. Unfortunately, the wedding wasn’t exactly the fairytale ending they had hoped for, and now the pair is on the run from a scandal.

Desperate to escape not only the tabloids but Nick’s angry grandmother, Queen Eleanor, Bex and Nick settle in the small town of Wigtown, Scotland. There, they go incognito as a pair of booksellers while the dust settles on their disastrous wedding and a scandal involving Nick’s brother.

But Queen Eleanor has no intention of letting the Duke and Duchess of Clarence avoid their royal duties by staying off the grid forever, and she fetches them back to London. Bex and Nick go about the business of trying to balance their personal and public personas while building a happy marriage amid family secrets and animosities.

The Heir Affair is filled with details about life among the (fictional) royals, with enough based-on-real events and details to satisfy the most dedicated Anglophile. It’s a good idea to read (or reread) The Royal We in order to understand the relationships between the characters, but this wickedly good tale shouldn’t be missed!

I adored Kerry Winfrey’s previous romcom outing, Waiting for Tom Hanks, so Not Like the Movies (Berkley) has been high on my list of must-reads this summer. Winfrey doesn’t disappoint, bringing back characters from her previous book and weaving a tale that’s just as witty as it is poignant and painfully realistic.

Ever since her mother took off when she was a kid, Chloe Sanderson has felt like it’s her job to take responsibility for everyone else, including her father, who has Alzheimer’s. She works in a coffeeshop where her boss, Nick Velez, a gruff old soul (though he’s only two years older than our heroine), just happens to be hopelessly in love with Chloe, though she can’t see it.

Chloe’s life gets more complicated when her screenwriter best friend, Annie, turns her life into a romcom movie — giving it a spin that has Chloe and Nick living happily ever after. Of course, Chloe can’t imagine that kind of bliss. She’s too mired in her own issues, as well as in the problems of her family, while also taking on vast amounts of responsibility for Annie’s wedding preparations.

But Chloe’s scrappy dedication to her loved ones, and Nick’s dreamy, unconditional support of her messy life hint that it’s only a matter of time before love blossoms and life begins to imitate art. Chloe and Nick’s banter, the cozy coffeeshop setting, and the endless pop-culture references give Not Like the Movies an original, memorable feel and make Winfrey’s quirky, clever comedy a winner.

Susan Mallery is known for her relatable and moving women’s fiction, but she also has a knack for weaving satisfying romance throughout her plots. The Friendship List (HQN) is a heartfelt tale about the power of friendship, but it delivers a twofer in the romance department, too.

Ellen Fox and Unity Leandre have been best friends since childhood, and they have seen each other through all the ups and downs of life. Ellen is a single mother who is crushed to learn her teenage son is afraid to go to college and leave her alone. Unity, who lost her soldier husband three years earlier, is still processing the grief and is unable to move forward in any meaningful way. A list of summer challenges seems just the thing to help Ellen break out of her rut — and Unity, too. But neither woman could have dreamed how things would go…

There’s plenty of humor punctuating the angst as Ellen and Unity push past their comfort zones in the hopes of bringing some fun into their lives. Things get steamy when Ellen connects with Keith Kinne, a high school coach she works with, and Unity gets matched up with Thaddeus Roake, the grandnephew of a senior friend.

But while getting a tattoo, going skydiving, and having hot sex might make for perfect summer to-do items, it’s the long term that really counts. Ellen and Unity find that love, like friendship, is worth fighting for. They not only find love for themselves; they nudge each other to overcome their fears and reach for the happiness they deserve. And, really, isn’t that what friendship is all about?

The Friendship List is a sweet, frothy summer read that will have you making your own to-do list — hopefully, with your best friend by your side.