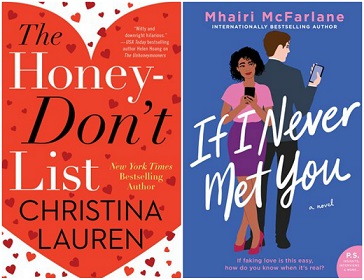 A lot has changed in a month, hasn’t it? The world is experiencing a pandemic, and everything feels a little surreal and scary right now. I’ve always felt like reading is an essential part of maintaining my mental health, and now more than ever, I need books to see me through this uncertain time. Here are a couple of charming romantic comedies that took my mind off the news, if only for a little while.

Every devoted romance reader has a few auto-buy authors, and Christina Lauren is on my list. I have been wanting to read The Honey-Don’t List (Gallery Books) since I first heard about it — and it didn’t disappoint.

Carey Duncan and James McCann work for Rusty and Melissa Tripp, the married co-hosts of a popular DIY home show and authors of a new book. Casey has been with the Tripps since she was a teenager and has contributed to their success more than anyone knows. James is a brilliant MIT grad who thought he was taking a job as a structural engineer, but instead finds himself playing babysitter to the Tripps’ oversized egos.

Carey’s loyalty to Rusty and Melissa is driven, in part, by her need for health insurance for a muscle disorder called dystonia. She’s also concerned about the fallout should she decide to walk away after so many years. James is a fish out of water in the Tripps’ reality-TV world, but he needs this gig after a scandal at his previous job. Both of them are stuck, and isn’t long before they’re bonding over their shared toxic work environment.

When Rusty cheats on Melissa, it’s up to Carey and James to run interference and manage damage control for the Tripps’ brand — which means giving up their own vacations to escort the bickering duo on their book tour. Cooped up together, romance blossoms between the beleaguered assistants as they begin to question whether playing the Tripps’ game is worth sacrificing their own happiness.

Christina Lauren has created a sparkling contemporary romantic comedy that is as funny as it is romantic. Fans of DIY shows and reality TV particularly will enjoy this entertaining tale.

Mhairi McFarlane takes the fake-romance trope and gives it a clever spin in If I Never Met You (William Morrow).

Life is hard enough for Laurie Watkinson when her longtime boyfriend dumps her and then announces that his new girlfriend is pregnant. It’s even more humiliating because she has to paste on a smile and work in the same law office with him. Then a chance encounter with the office bad boy sparks a devious idea.

Charming and sexy player Jamie Carter wants to make a good impression on the law partners and secure a promotion. Problem is, his reputation as a womanizer tarnishes his professional image. He has no interest in settling down, of course, but having Laurie in his corner would give his respectability the boost he needs to impress the higher-ups.

Selling their fauxmance to colleagues and friends is a strategic measure designed to get them both what they want — a promotion for Jamie and an ego boost for the jilted Laurie. Things get interesting when they start developing real feelings for each other. Laurie has been through the wringer with her ex, and she doesn’t know if she can take a chance on Jamie.

Laurie and Jamie have more in common than it first would seem, with each compensating for old hurts in very different ways. Once they let down their guard — and let each other see who they really are — sparks fly. McFarlane’s deftly balances deep emotion with humor and romance for a wholly satisfying, sophisticated tale of modern love.