A new book offers “a good panoramic view” of the politician slain in his prime.

In my memorabilia file, I have a personal note from then Senator Robert Kennedy stating in his inky scrawl, "Every time I turn on my television you are defending me." I did often in the four years I worked at the Justice Department as a prosecutor in his organized-crime section, and later in New York City as a speechwriter in his Senate campaign. That was because, in my circle of liberal friends and media commentators, he was distrusted.

Until his later Senate years when he became the Democratic hero, Robert Kennedy — “Bobby” as author Larry Tye calls him in his new book, Bobby Kennedy: The Making of a Liberal Icon — had a popular image as the "ruthless” campaign manager for his brother John F. Kennedy, and earlier as a member of the notorious Joseph McCarthy’s investigating committee. 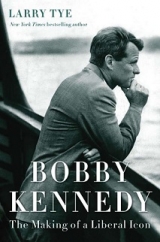 Liberals then, me included, saw him as his father’s political heir and an inappropriate, nepotistic appointee as attorney general. I had to be cajoled into working at Justice, and then I only committed for one year with the promise of major trial experiences. One became four, and my mind changed as I got to know him up close and personal. I later wrote a magazine piece about Kennedy and the liberals, making the point that Attorney General Kennedy didn’t fit the image liberals held about qualities they expected of their leaders.

So I turned to Tye's book about this evolution of a major public figure with interest. For young readers who did not live through the Kennedy administration, or haven’t read much of the extensive literature of those times, Tye’s book is a good panoramic review of those days and of RFK’s central role in them — the good and the bad.

Tye summarizes well-known histories of those times well for new readers: the family cult of the Kennedys; the sons’ ties to father Joe and all his views; the meeting with civil rights advocates that perplexed Robert F. Kennedy, and his immersion into the civil rights struggles thereafter; and the Cuban Missile Crisis that John F. Kennedy said wouldn’t have had a happy ending without brother Bob. All these dramatic tales and others from the Camelot days are well known, but Tye capsules them well.

My focus here is Tye’s views of RFK’s evolution as a liberal, a subject I wrestled with then and still reflect upon. A work in progress until the day he was killed, RFK was much more than a chip off his old man's block and the alter ego of his brother, Jack. During his attorney generalship and profoundly after his brother’s assassination, RFK grew into an international figure on his way to the presidency we who worked for him assumed would come, and seemed to be within his grasp at the very moment of his killing.

That story is the last and most interesting part of Tye’s book.

Everyone who worked with RFK witnessed his private moments of tenderness — in Mississippi embracing a poor, emaciated child; in California with Chavez; in Washington, DC, troubled by what he witnessed at a bad public school. At Justice, his colleagues observed many incidents of bravery, among them staring down Southern racists in tense, consequential encounters. I remember a moment of “mensch-ness” that was telling, a reason why my one-year commitment became four, and lifelong. It’s worth recalling publicly.

My doctoral thesis at Yale was on the contempt power. Columbia University Press published it, and the book came out while I was at Justice. At the time, the solicitor general was arguing to the Supreme Court that Governor Barnett was guilty of contempt. He demanded a trial by jury (assuming no Mississippi jury would convict him).

The department was pushing for a civil rights bill. Southern senators wanted to add a trial by jury provision to emasculate it. And they were reading parts of my book into the Congressional Record. I was right on the issue (the Supreme Court would later decide so, in a case I argued), but embarrassed by my work being used in ways that frustrated the department’s noble goals.

Embarrassed, I made an appointment to see Kennedy and offered to resign, humiliated by these events. Kennedy asked me about the subject and my views, agreed that I was right, and remarked that the timing of my book simply was unfortunate. He would hear nothing about my resigning. Instead, he asked for me to sign a copy of my book for him and handed me a signed copy of his The Enemy Within. Ruthless? Illiberal?

Camelot and Camelot redux both ended with a senseless assassin’s gunshot. John Glenn told me that he was asked to rush to Hickory Hill the night RFK was shot to be there when the children woke up (the older ones were in California). He came in the middle of the night, sat at his friend’s desk, and noticed Kennedy’s notes in the margin of The Greek Way. This Kennedy had become introspective after his brother’s assassination; he’d lost his moorings, and no doubt felt guilt wondering if their past had led to this tragedy.

But it wasn’t reflection alone that changed Bobby from ruthless cold warrior to liberal icon. By the end, I believe, he was both — one person the product of his early experiences; the other of his more recent ones, ones more his own than inherited. He didn’t remake himself, but evolved, more in the Senate than at Justice, but all of a part.

Uniquely, he appealed to liberals and conservatives, hip journalists and blue-collar cab drivers; minorities believed in him as legitimately concerned with their plight. He was, Tye writes, “half James Cagney, half James Dean.” Senator George McGovern assessed him as “a tough minded man with a tender heart.”

Bobby Kennedy is a good read. Younger readers will learn of an exciting and unique period in recent American history. I read this book with a lump in my throat.