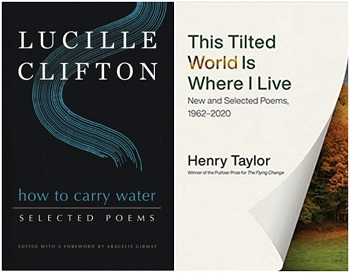 I’ve been thinking a lot lately about writers and their literary legacies. Maybe that’s in part because so many fine writers have passed away this year; maybe it’s simply because it’s autumn, which always seems to bring a mood of quiet reflection after summer’s heat and light.

Or maybe it’s because I, like so many others, was astonished in the aftermath of Louise Glück’s Nobel Prize win to discover via social media how many younger writers had never heard of her.

So when two career-spanning poetry collections came across my desk, by the late Lucille Clifton and by Henry Taylor, I was eager to explore them, not only for the individual poems themselves, but to see how well the books represented the legacies of these contemporaneous but profoundly different writers.

Before I dive in, I want to say that though I cannot claim either of these poets as friends, teachers, or mentors, we were acquainted. I taught twice in the beloved, now-defunct literary conference held biannually at St. Mary’s College of Maryland, where Clifton was a distinguished professor of humanities. We had a few brief conversations, and she was kind.

And I met Henry Taylor via some friends at American University, where he co-directed its MFA program. He gave me a lovely blurb for my second poetry book, for which I will always be grateful. But I have no ties to either writer that might prevent me from an objective assessment of their collections.

Clifton’s longtime poetry publisher, BOA Editions, has done an impressive job of sustaining and supporting her legacy in the decade since her death. In 2012, they put out a literary-star-studded edition of her collected poems. It was edited by Kevin Young, a lauded poet and essayist who was, until recently, poetry editor of the New Yorker, and poet Michael Glaser, who directed the program at St. Mary’s and worked closely with his friend Clifton for decades. The edition boasted a foreword by no less than the great Toni Morrison and an afterword by Young.

All in all, it was a beautiful way to package the work of one of our most beloved poets, who, to quote Young’s essay, was a “National Book Award winner, Fellow of the Academy of Arts and Sciences, Chancellor of the Academy of American Poets, children’s book author, mother, memoirist, Jeopardy champion, survivor, poet, and national treasure.”

If you’re a completist, this is an essential book, but it’s over 700 pages long. So it makes sense that the slimmer How to Carry Water: Selected Poems is now here. Edited by Aracelus Girmay, who, like Clifton, is both a poet and a children’s book author, the volume is chronologically arranged, beginning with a section comprised of uncollected early work, and proceeding with selections from Clifton’s multiple and often-interweaving poetry collections.

What struck me first is how fully formed that early work was. The natural phrasing of her lines, the use of repetition as invocation, the fine precision of her observations, and above all, the way her endings so often take the reader’s breath away — all of that is already present. Take for example “miss rosie,” which begins, “when I watch you / wrapped up like garbage,” and proceeds through a description of how the woman addressed is “sitting, waiting for your mind / like next week’s grocery,” to the stunning final lines:

The way the repetition of “i watch you” becomes homage, the contrast between the “wet brown bag” of now and the Georgia Rose of the past, the emphasis on knowing what was as well as what is — all of these Clifton trademarks are already fully developed here.

Most of all, we see what would become a keystone in the work to come: the importance of the self-assigned work of the “i,” who, however lowercase her appearance, is there to bear witness to the tragedies of broken lives and wounded minds, especially Black lives and Black minds, who continues to “stand up,” to remember, to attest.

Though there are many poems for or about men in these pages, this selection reinforces Clifton’s insistence on celebrating the quiet heroism of women’s lives. One of her many gifts was how she could connect those individual lives to a greater arc, often achieved through her aforementioned stunning way with an ending.

A late-career example of this is the poem “study the masters,” from the 2000 collection, Blessing the Boats. In it, Clifton describes her “aunt timmie,” writing that it was her iron, “or one like hers, / that smoothed the sheets / the master poet slept on.” The last five lines of the poem take the reader through concentric circles of meaning to a very big picture, indeed:

if you had heard her
chanting as she ironed
you would understand form and line
and discipline and order and
america.

What a brilliant leap. What a catch in the throat. What quiet power.

Praise is due, as well, to Girmay’s lucid and lyrical foreword to the collection, which establishes the foundations of Clifton’s enduring legacy. Beloved in life, Clifton continues, posthumously, to influence generations of poets and to surprise and move her readers.

If Clifton’s literary legacy is a steadily burning fire, Henry Taylor’s is more like a comet — a bright flash followed by what seems an intentional disappearance. His collection The Flying Change was awarded the 1986 Pulitzer Prize, and in that decade and the one that followed, he was a lively member of the DC-area literary community who gamely participated in poetry slams and generously supported lesser-known writers.

Who can say what led to his decision, after retiring from academia, to buy a Winnebago and hit the road? Many of us assumed that, since he’d withdrawn from the public life of poetry, he’d stopped writing. So it was a happy surprise when his This Tilted World Is Where I Live: New and Selected Poems, 1962-2020 came across my desk.

After a tender dedicatory poem to Taylor’s wife, the book is arranged in reverse-chronological order; we start with the poet’s most recent work and move backward through his eight collections. The first section begins with “The Living Room at Springdale,” a poem that emphasizes the elegiac strain running through much of Taylor’s work.

It begins with a quiet command: “Mentally enter a long-remembered room / and note which of its features have withdrawn.” The tone is vintage Taylor: a little cool at first, nudging the reader to think, to observe. After noting that which has faded, or shifted, or disappeared in the mind of the “you,” he guides us to the comfort of what remains clear:

the voice of a melodramatic actor
reciting snips of Julius Caesar and Hamlet,
the first time in your life, you now believe,
that you heard the question whether or not to be.

This keenly thought-through evocation of the past — the feel of the chair, the old record format, the actor, who, though overplaying it, still lingers in the mind of the “you” — slides into the present day with the parenthetical “you now believe.” It’s hard to believe that Hamlet’s famous soliloquy could be freshly contextualized, made immediate and personal, but Taylor does it here.

The selections in this volume underline one of Taylor’s major themes: how memory keeps the past present, dissolving the linear track of our lives into something more fluid, mysterious, permeable. “The Hayfork” begins with the poet wanting to “get up from the kitchen table” and see for himself if the holes he made in a barn floor forty years earlier are still there; “Boy Hunting in a Bog” starts with, “Through a window before which I’ve sat / often enough to take it wherever I go.” Still, we are not entirely at memory’s mercy; we can make choices, as in the poem “A Voltage Spike,” in which the poet refers to “a town whose name I don’t bother to recall.”

As the book moves backward through Taylor’s career, the reader can trace the way his style evolved from the finely composed lines in his mature work to the looser, longer early poems. But his elegiac impulse was there from the beginning. The penultimate poem in the book, the multi-sectioned “Things Not Solved Though Tomorrow Came,” begins with the narrator taking his daughter off to boarding school and moves through a series of other losses and separations, each recalled separately, carefully, as if rubbing a series of wounds.

It’s a more vulnerable poem than some of the later ones, its pain less tempered by craft. And it highlighted for me the one small quibble I have with this collection: I wish it had an introduction that traces the development of Taylor’s work and the value of his literary legacy.

Like his contemporary Lucille Clifton, he is a much-lauded poet whose teaching and mentoring made a difference in many poets’ lives. While it’s not a requirement that a career-spanning collection include such an essay, I longed for an anchoring piece of prose that might establish who this poet is and why he matters.

Rose Solari is the author of three full-length collections of poetry, The Last Girl, Orpheus in the Park, and Difficult Weather; the one-act play “Looking for Guenevere”; and the novel A Secret Woman. She has lectured and taught writing workshops at many institutions, including the University of Maryland, College Park; St. John’s College, Annapolis, Maryland; and the University of Oxford’s Centre for Creative Writing in Oxford, England. Her awards include the Randall Jarrell Poetry Prize, an EMMA award for excellence in journalism, and multiple grants. In 2010, she co-founded Alan Squire Publishing, a small press with big ideas.