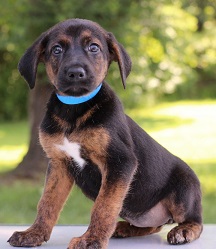 A puppy, to be precise.

Now, you’re probably thinking, “Wait a minute, Delancey. You’re supposed to be writing about romance. What does this have to do with that?”

So here we go.

The definition of romance describes a sense of excitement and mystery — either relating to love or to the everyday. (You can find a cup of soup romantic. It’s a challenge, but you can do it. At least, I can, especially during the fall.)

I think romance is the act of finding excitement and intrigue in the most mundane of things, and also, of course, in those things others agree are exciting.

And getting a puppy is exciting. Because what do we think about when we bring home a puppy? For me, it was images of my boys rolling around with a fat, furry little friend, hugging her and petting her and being chased around the yard.

I imagined myself working, the pup curled at my feet. I thought of my husband in the garage, the dog nearby, interested but out of the way.

And that right there? What a romantic notion. Because what we got was nothing like my imaginings.

We got a headstrong and stubborn little murder hound intent on sinking her teeth into any appendage in her line of sight. Sure, she’s cute and sometimes friendly and cuddly. And it’s getting better.

But those first few weeks? I realized that I’d romanticized the idea of getting a puppy. I’d conveniently forgotten the puddles and piles, the nips and bites, the barking and whining.

I did this same thing with babies. At least, the first one. I was working freelance as an editor and writer when I became pregnant with my first son a million years ago. And I told my husband, “I’ll still be able to work as I do now. I’ll just put him down to nap, or he can play in my office on a blanket or something.”

This statement demonstrated my complete ignorance of what babies do and don’t do.

By the time I emerged from the sleepless craziness of the first six months, the kid was a holy terror. He walked before he crawled, and he spent the first four years of his life finding new and inventive ways to try to kill himself. I couldn’t turn my back to work while the guy was busy trying to eat or topple anything that wasn’t nailed down.

And now that my boys are 10 and 12 and life is relatively stable, I’ve gone and done it again. Only in dog form.

So I wonder what it is that makes humans so susceptible to romanticism? Isn’t this belief that “it will be wonderful this time” what drives us to try again and again at things we’ve failed at in the past?

Isn’t it what makes us gather our hope into a fist and punch through all the reasons why we shouldn’t do whatever the thing is in a last-ditch attempt to find what we seek? It’s insanity.

And it’s beautiful, isn’t it?

Romanticism is what makes us tick as humans. When we lose the ability to hope against hope, when we stop expecting there’s a chance for the best, that’s when we settle into our easy chairs and stop living. That’s when we take the blows life deals us without a fight. And maybe that’s the beginning of the end.

Romance — and the hope and belief in something potentially foolish or impossible — is critical to our ability to grow and persist. This is why I write about it. Because, contrary to popular belief, romance novels aren’t about sex and bawdy situations, shirtless men, and women with poorly stitched bodices.

They’re about hope against all odds. They’re about believing you deserve a happy ending even when the world has taken one away from you over and over.

Romance novels are about getting back up to fight another day.

And some romance novels are about difficult puppies turning into fantastic companions. That’s the one I’m currently working on. Wish me luck!

Is it ever okay to limit kids’ access to books?