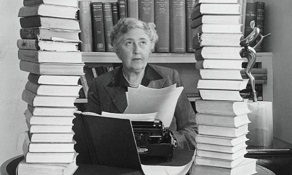 Inspector Hercule Poirot has risen from the dead. Has he come back to atone for our sins and save humankind? No. He has returned to nourish the pockets of Agatha Christie Ltd., owned by Acorn Media Group and Christie’s descendants.

Which would be all well and good, only Agatha Christie killed Poirot off in Curtain: Poirot’s Last Case. In the book, published a year before Christie’s death, Poirot is aged and suffering from a weak heart. Knowing that his time is coming to an end, he does something unthinkable: He murders the murderer — whose methods are so diabolical that he cannot be prosecuted for his crimes — and then doesn’t take his heart medicine, essentially committing another murder, death by suicide.

Given such an implicit statement by the author, is it right to bring Poirot back? As a lifelong fan of Christie and her finicky Belgian detective, I think not.

I discovered Poirot in my awkward pre-adolescent years and felt a great affinity for the egg-headed foreigner with magnificent moustaches who solved crimes in homogeneous England. I, too, was an outsider, somebody instantly identifiable as “other,” though not as adept as Poirot at letting the small prejudices and slights roll off my back. Like Poirot, I was blessed with healthy and active “little grey cells” and a keen eye for observation, as well as a sense of superiority to those who quickly dismissed me because of my foreignness.

The first Poirot mystery I read was Hickory Dickory Dock, certainly not Christie’s best and atypical because of its international cast of characters of university students boarding at a hostel, rather than the array of hopelessly British suspects who usually appear in her books.

What was typical was the meticulous plotting, the cozy English countryside setting, and characters who did not stray outside the boundaries of their broadly sketched personalities. There were no loose ends or gaping holes, no moments of recoil when the reader thinks the author has employed dirty tricks or taken the easy way out, no suddenly conjured-up clues at the big reveal.

It is due to Agatha Christie that I have little tolerance for today’s Hollywood blockbusters riddled with plot holes and characters who behave against all logic in order to move the story along.

No, Christie’s is not great literature, nor maybe even the best that the mystery genre has to offer (though the resolution of Murder on the Orient Express is brilliant). But it is wonderful reading, appealing to a huge audience that crosses all cultural boundaries.

According to estimates, Christie is the second-best-selling author of all time and is the world’s most-translated author. Ask almost anyone you know who reads, and they will admit to having perused one of her books or, at the very least, watching a movie or TV show based on her work.

That adds up to a fairly sizable profit for her estate. Can you blame them for wanting to keep capitalizing on the Agatha Christie brand?

In this free-market world of ours, there is so much choice, and where there is a choice, there is misery. After a hard day’s work, people want relaxing entertainment, but to sift through all that is on offer is laborious, so they reach for the familiar: the sitcom that long ago stopped being funny; the latest lamely plotted zillion-dollar Hollywood production of a comic-book franchise; the newest publication by an author who once wrote gripping tales but now produces drivel.

Purveyors of culture understand this and strive toward building and maintaining a beloved brand that people will be loyal to for the rest of their money-spending lives.

One obvious illustration of the power of the brand is The Cuckoo’s Calling by debut author Robert Galbraith. The week after it was revealed that Galbraith was really megastar writer J.K. Rowling, the book sold 17,662 copies, in contrast to the 43 copies that had been sold the week previous to the unmasking.

Another example is world-acclaimed violinist Joshua Bell’s two free concerts in Washington, DC. In 2007, he played incognito at the L’Enfant Plaza Metro station, his violin case open before him as if he were a busker, while more than a thousand commuters trudged past. Almost none stopped. Fast forward to just a few days ago when Bell packed the main hall of Union Station. The brand was known and advertised, and the faithful came flocking.

Instead of offering fresh ideas and new artists, merchants of culture find it easier and more profitable to sell the franchised idea, author, or character. There is a wealth of books based on re-imaginings or sequels of classics, like Longbourn, which re-tells Pride and Prejudice from the servants’ point of view; Scarlett, the sequel to Gone with the Wind; or March, the story of Jo’s father from Little Women.

These books are serious literary endeavors that have been favorably reviewed. March won the Pulitzer Prize. But why not a book about servants at an English manor that wasn’t invented by Jane Austen, or a man fighting in the Civil War who didn’t happen to be the father of a beloved group of girls depicted by Louisa May Alcott?

Why? Because the sales are not built in. And though we like to pretend that culture is above the dirty business of money, it is not, especially in these days of the global conglomerate, when the publishing industry is dominated by five major corporations whose only duty is to make money for their shareholders.

Critical theorists Theodor Adorno and Max Horkheimer saw it coming way back in the 1940s when they wrote that “the conformism of the buyers and the effrontery of the producers who supply them prevail. The result is a constant reproduction of the same thing.”

Thus, the resurrection of Hercule Poirot. The reviews for The Monogram Murders have been overwhelmingly congratulatory and, by all accounts, author Sophie Hannah has rendered Poirot faithfully and with great respect. And yet, it seems a shame that he could not lay undisturbed in the grave into which his creator put him, but must be disinterred to fight another crime. And make another dollar.

4 Novels that Get Adoption Right

In celebration of National Adoption Awareness Month, an adoptee offers some suggested reading.