Remembering the man who loved books 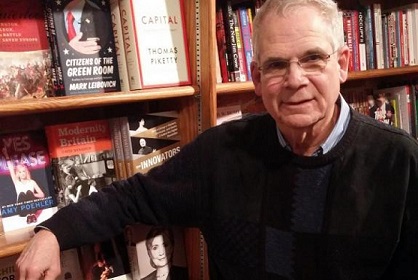 “The only people for me are the mad ones, the ones who are mad to live, mad to talk, mad to be saved, desirous of everything at the same time, the ones who never yawn or say a commonplace thing, but burn, burn, burn like fabulous yellow roman candles exploding like spiders across the stars and in the middle you see the blue center light pop and everybody goes ‘Awww!’”

I could start there, with Kerouac’s famous words, to describe my friend Phil Levy, who passed away Oct. 12th. Why? Because it captures something of his spirit, the ethos that moved him.

If you would know Philip Levy (1944-2017), know this: The man loved books. He lived his life alongside them. Anyone who ventured into his Bridge Street Books quickly realized that. If one asked about a book of poetry, Philip would tell you about the life and times of that poet. Ditto if the topic was philosophy, history, music, current events, or any variety of other subjects.

It was as if every book in his Georgetown store was a friend; he knew all of them. In an age when young computer-dependent store clerks don’t know how to spell Wittgenstein, or know who Kafka was, or what book followed The Dharma Bums, or which Elvis Presley biography is the definitive one, Philip was exceptional.

To stroll into his bookstore was to walk into a wonderland where classic Bob Dylan music filled the air as Philip held court, sitting in his chair talking about politics, Ernst Pawel, theater, Hannah Arendt, the Style page, the latest biography of Freud, or the new movie Menashe.

Like it or not, the man engaged you once you crossed that threshold into his narrow two-story shop where he routinely gave his regulars a discount. There was something old-world about Philip, something pre-digital, something right off the grooves of “The Freewheelin’ Bob Dylan” or “Kind of Blue” LPs. And then there was Philip’s baseball chatter (his familiar Washington Nationals baseball cap was a giveaway).

Get the picture? It’s Sidwell Friends (’63) sepia, University of Wisconsin at Madison (’68) black-and-white, and vintage Georgetown. Mix all of that with the allure of that shop located at 2814 Pennsylvania Ave., NW, and a picture of a most unusual man emerges.

“When your rooster crows at the break of dawn / Look out your window, and I’ll be gone / You’re the reason I’m a-traveling on / But don't think twice, it’s all right.”

Philip’s friends — writers, poets, readers, sports fans, Dylan aficionados, and others — owe him a special DC farewell. Say, a public poetry slam in his honor? Or a block-long line of people holding books on the sidewalk leading to Bridge Street Books? Or whatever. Use your imagination and spread the word! And then spread it again.

Remembering the man who loved books