Will America’s bullet-riddled narrative ever come to a conclusion? 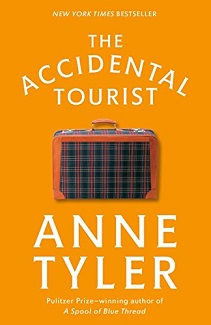 Some travel agents offer “surprise travel.” They choose your destination, plan your trip, reveal the itinerary shortly before departure. It sounds terrible. I love planning, anticipating, and reading guidebooks and (especially) fiction set in my upcoming locale.

It’s an oxymoron: planned surprise travel. All travel is surprise travel. Whether we plan it or take a package tour, what happens is to a large extent out of our control. There will be detours and unscheduled stops. Only the unexpected is guaranteed. And after all, isn’t escaping routine part of our intention?

Not for everyone. Remember Macon Leary, protagonist of Anne Tyler’s novel The Accidental Tourist? Hating travel, he writes a series of guidebooks for reluctant voyagers who prefer being home but must travel for business.

Whether we hate or love to travel, returning home to routine, to friends, to family is the expected conclusion. Journeys end in lovers meeting goes the song in Twelfth Night. But not all journeys have a homecoming. Millions of refugees have travel forced upon them by war, famine, and persecution. They will never enjoy a homecoming.

We take small journeys every day and assume we’ll return home. From the grocery store, the subway. We send our children to school, trusting we’ll be together again at day’s end. But we’ve seen yet again (and more than once) this month that shopping, going to work, going to school may end in murder.

Every single ordinary day is now “surprise travel” with the potential to become a fatal journey. The dangers include accident, acute illness. And gun violence. Especially gun violence. Americans exposed to the chronic assaults of racism and poverty are already wise to the precarity of life. The inequitable odds of untimely, violent death are higher for them and their children. All mortals must die — later, we hope, but maybe sooner. We’re all at risk, but some face more risk simply when going to work, going to the grocery store. Going to school.

Twice a day, a school bus rumbles by my house on a quiet ridge in rural Pennsylvania. By the time it passes, there are fewer students on board than the 19 fourth-graders killed, along with their two teachers, in a Texas classroom last week.

People hunt up here, teach their children the sport and the gun safety that goes along with it. They eat what they kill. They don’t go after deer with assault weapons.

Last Tuesday afternoon, about an hour after the yellow bus flashed by, I heard the news from Uvalde, announced in a crisp British voice (WQED uses BBC newscasts). The announcer concluded, “School shootings are not uncommon in the United States.” Maybe I imagined disapproval in her proper tone, but we are shamed — and ashamed.

Mass school shootings were unheard of 40 years ago when my first child was born. She was a junior in high school when Columbine occurred. A year later, we went to the Million Moms March with her younger sister. Now, almost a quarter-century later, school shootings have become common. Now, that little sister has grown up and become a journalist; she reported this week from Uvalde. Now, once again, we brace for the next massacre, likely to be perpetrated by another mentally ill young man with suicidal, homicidal cravings for notoriety.

So here we are, reluctant travelers in an increasingly violent country. The Accidental Tourist was published in 1985. My second child, my son, had just been born. I read it in a postpartum daze of protective awe at the miracle of his new life.

Macon Leary is another of Anne Tyler’s gentle, eccentric characters who lives in a quiet Baltimore neighborhood, insulated from the poverty just miles away. The story begins a year after the murder of his 12-year-old son, Ethan, at a Burger King near the child’s sleepaway camp far from the city.

“It was one of those deaths that make no sense,” Macon says, “the kind where the holdup man has collected his money and is free to go but decides, instead, first to shoot each and every person through the back of the skull.”

A year later, the phone rings while he is sleeping, and Macon dreams it is Ethan:

“Calling from camp, wondering why they’d never come to get him. ‘But we thought you were dead,’ Macon said, and Ethan said — in that clear voice of his that cracked on the high notes — ‘Why would you think that?’”

And then Macon wakes up, remembers, and understands “why people said hearts ‘sank.’”

It’s been 37 years since that fictional father lost his fictional son to fictional gun violence.

So many real children have been lost to real gun violence since. So many real parents are waking up to a living nightmare, the reality of heart-sinking loss.

Membership Has Its Privileges

Why I’ve come around to the idea of joining a book group.