On the Allure of Eros

Plato’s Symposium and the philosophical search for love 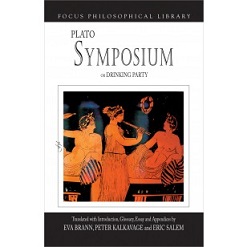 Plato’s Symposium (or Drinking Party) presents men of great importance discussing love as represented by the Greek god Eros. The book begins with an intro where clear thinking and good writing guide us to another reality, a text that’s readable, accessible, and enjoyable.

In it, six notable men, including Socrates and Aristophanes, gather for a drinking spree. However, they’re all so hungover from the night before that they choose to exchange drinking for talk — taking turns arguing/exploring, one by one, a case for love, while defining themselves in the process.

Each party guest becomes a storyteller in a battle of ideas colored by his own personality. The poet Agathon hosts the group with verbal glitter; he’s a bit of a showboat. Agathon praises Eros as “happiness,” a blend of goodness, wisdom, and beauty (of course connected to his own art).

Aristophanes, the comedic playwright, gives us a myth about the beginnings of humankind, how we are all part of one original embodiment (with the proper mix of body parts) until some of us are sliced as women-loving men; other “slices” turn women toward women and men toward men.

Another guest, Pausanias, speaks of the virtues and vices of boy-love according to custom and convention. Eryximachus, a physician, begins with the body, “the filling up and emptying out,” and then moves onto cosmic love. Each man’s a prism with his own belief system, talking as much about his own self-creation as the form love takes.

While the speakers consider love as an otherworldly force, as well as a human condition, what of the most common thought: Love as sexual union. Does it cause happiness? Or is it need that brings us back for more?

Socrates, with tales of his own enlightenment, turns arguments inside-out with logic and wit. Most delightful is the12-page question-session between Socrates and his magical teacher, Diotima, and also the five-page dialogue between Agathon and Socrates, where the latter refutes the former’s ecstatic claims that love is all good, beautiful, and noble, and bursts that balloon of mindless chatter using philosophic rhetoric. A fascinating interchange, step by step.

Poet W.S. Merwin says, “Translation is impossible and yet we do it.” Any translation is a reimagined text, no matter how faithful, but I have nothing with which to compare this. And so I'm left with my own sensibilities.

When I read, I don’t want to slog through the incomprehensible or unfathomable. This book is an antidote. It’s a colloquial and silky read. Since the topic is love, Eros is the subject of physical and exotic love — sexual desire. But the inquiry leads beyond primal origins to the sublime, connecting to the soul.

We wonder how the classics remain relevant in our society, with Twitter and electronic images substituting for authenticity; where intellectual health is thought to be medicine. And although I’m a reader, I also watch trash TV; I like hip-hop and rock ‘n’ roll; I know the names of all the celebs and their ex-husbands — and this book has been the most exciting and fulfilling time I’ve spent this summer.

The translation of Symposium by world-class philosopher Eva Brann and renowned scholars Peter Kalkavage and Eric Salem should be in every college classroom, and, with today’s turbo kids, perhaps high schools. The second part of the book is an essay commenting on the dramatic frame of each episode, the speeches, and the characters. There’s also a schematic “conjectural” drawing depicting where each symposium guest was located. Bonuses like this are also in the glossary and appendices.

I thought if a part of this book were memorable, I’d put a sticker on the page; and here’s a book now with a sticker on every page, and one I’ll keep on my bedside table to pick up and read anywhere it opens.

There’ll always be something to make me think about because excellent conversation is never boring; humor and high spirits are the hydraulics for Symposium, which is one of the most important texts in human history. And this particular edition is a good gateway drug to reading other classics.

Grace Cavalieri is founder of “The Poet and the Poem” for public radio, now recorded at the Library of Congress. She’s celebrating 40 years on the air. Her new book, a compendium of poems, plays, and interviews, is Other Voices, Other Lives (Alan Squire Publishers).