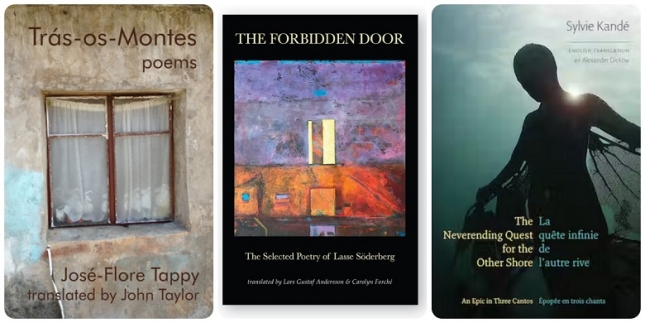 Movement in poetry can convey myriad things, from movement of the line to physical placement — a journey within the poem or poetry collection. In my 20s, I paid little attention to movement within a poem but also to my own movement around the world, which of course ended up in my poetry.

It wasn’t until my thesis advisor in graduate school mentioned how much she enjoyed being in one location in one of my poems and then suddenly finding herself halfway across the world in the next that I began to give it more thought.

As the child and grandchild of immigrants, movement is so ingrained in my existence — much of my family still lives in another country, and we recount our own ancestral migrations from France, Martinique, and Puerto Rico — that my own migrations across the United States always seemed small in comparison.

But this month’s offerings remind me how even within a small space, movement is expansive, whether it be from Sweden to Spain, from Switzerland to a tiny village in Portugal, or from the shores of Africa all the way to an unknown world on the other side of an ocean. Even in our smallest moments of stillness, we are not a still species. We move our bodies with each breath; we evolved to walk, to journey sometimes thousands of miles to where we could best survive.

Our languages evolved with us across time and space, ever changing. These three collections are from European poets who capture movement each in their own important way, while their translators embody their own movement from one language to another.

Swiss poet José-Flore Tappy’s award-winning Trás-os-Montes (MatHat Press), translated by John Taylor, is a fascinating look at the interior life of a woman in a rural village in Portugal. Though the collection encompasses other themes, it is this woman, along with the narrator, whom we do not truly know or see, who is the central protagonist and is fascinating in her seeming simplicity.

Urban Westerners often think of rural places as sleepy, uneventful, possibly even boring. Nothing could be further from the truth. To live a rural existence is to live close to, and be dependent on, the land, the seasons, the weather. All of these factors are why climate change is so devastating, why it pushes people from their homes and way of life toward urban centers. And it is why the people who survive off the land live closer to bone but can seem unchanged by social mores.

Tappy’s “Maria,” is a character study both quiet and deafening, each section delving into her existence and named after a liminal space, such as “The Hallway” or “Before the Night.” Tappy paints a vivid picture of farm life through Maria, who may own a boardinghouse or simply have a large family, keeps the home, cooks, and tends to her vegetable patch, always aware of what must be done:

“Little is needed to keep/shortage away. But this little is heavy/and from morning to night/she lifts it without respite.”

Maria seems always in motion, through necessity, but when she allows herself a moment of rest, it is then her memory takes up the movement in her interior within the house, within her body, within her mind. Maria carries a lifetime that pushes itself up through the cracks when she pauses her labor.

The visceral truth is that we all contend with a culture that demands we labor at all times, leaving us no space to check in on ourselves in a meaningful way. So, we who think we have so much more than “simpler” folks are exposed; people like Maria know what they have. Tappy writes:

“Curtains drawn, feet propped
on a low chair,
she knows without knowing,
vanishes behind the lamp,
hastily folding around her
what little shines

wrapped in wool, rags,
her legs look like dolls

Beneath her blouse,
the raw onion blends with sorrow,
love, or whatever resembles it,
she holds it tight between her breasts,
remembers”

I am not often compelled to review a poet’s selected poetry because I’m more interested in how a single collection reflects their vision, but The Forbidden Door: The Selected Poetry of Lasse Söderberg (Arrowsmith Press) captures my imagination with its liminal, seemingly dangerous title. And in it, translators Lars Gustaf and Carolyn Forché have pulled together their own vision of a poet’s lifetime of work.

Söderberg, who is Swedish, embraces the movement of his travels. Obviously influenced by the Spanish and Latin American poets of the 20th century, the book is peppered with not only visits to Mexico, Central America, and Europe, but references to poets such as Octavio Paz, Pablo Neruda, and Federico Garcia Lorca.

Söderberg writes with compressed sparseness in both his lines and imagery, much like Lorca. I’m also influenced by Lorca’s writing (the duende in the name of my bookstore, Duende District, comes from his theory of the duende, the deep song) and his revolutionary stance, so I appreciated the solemn memorial poem about his execution, “The Crime Was Committed Here,” in which Söderberg’s form and tone speak to Lorca’s poem “Farewell,” and also reference an opera written about Lorca’s life, “Ainadamar”:

“A black car
at the roadside.

An angel
without a face
among the trees.

The clock
Is at five in the afternoon.

In the stillness
someone is crying:
the spring of Ainadamar.”

Reclaiming the concept of “manifest destiny” from its Europe-centric identity, French poet Sylvie Kandé reaches into her own ancestral past to tell the story of Mali’s 14th-century emperor, Abubakar II, who set sail to find a new world, in her epic poem The Neverending Quest for the Other Shore: An Epic in Three Cantos (Wesleyan Press). I love this on multiple levels, especially because in Mexico and Central America, there exists evidence of trade with African nations well before Europeans brought Africans over as enslaved people.

Kandé’s composing of Abubakar’s preparation for his journey and the subsequent voyage itself would rival anything by Homer; it is full of legend and life and details that make your head spin in the best way. She writes Abubakar as both the myth and the imperfect man. He is ambitious and arrogant and, as are all great leaders, convinced of his path:

“A timely thing; truth rankles the eye and does not burst it
The boaters of Abubakar the Second
this true descendant of our empire’s father
this hero born to fulfill his singular destiny”

Kandé also ties in modern migration from Africa to Europe, which serves as a reflection of the Latin American immigration to the United States that’s often due to climate change and destabilizing actions by the U.S. causing impossible living situations for people to its south.

Europe is unwelcoming to African migrants and puts barriers in place to stop African migration, as do the United States and Canada to Caribbean and Latin American nations. (We have the same restrictions for African immigrants but not the same proximity.) Kandé highlights these injustices — and the contrast between Abubakar’s epic journey with the African migrant’s need for a different kind of ingenuity — in her final canto:

“I’m So-and-so as it’s written in my papers:/seeing what the name cost me I might as well secure a return on it/The other I keep it clean and for better days/If they catch So-and-so and tie him up to deport him/I’ll leave them this cast-off as a trophy.”

The third and final part of our Summer Poetry Round Up by Grace Cavalleri.