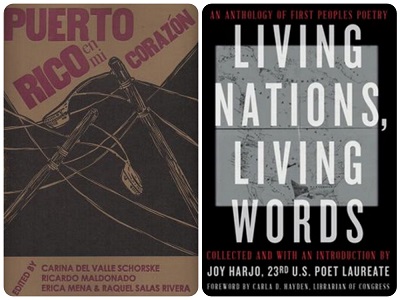 Let us walk into November with a new direction as the year draws to a close. In the United States, November is both Native American Heritage Month and Puerto Rican Heritage Month. It’s also when we celebrate Thanksgiving. One can imagine the fraught emotions, misinformation, and mythologizing these occasions inspire, but poetry is where we can center ourselves.

Poetry is the map of human stories and dreams — of places the collective has chosen to no longer see — leading back to the beginning and pointing toward an endless tangle of possibility.

Two weeks ago, my fellow Taíno descendants — our ancestors, the first Indigenous peoples Christopher Columbus encountered and subsequently slaughtered and enslaved — worked to stop auction house Christie’s from selling our ancestors’ stolen sacred objects to anonymous rich people. We did not completely win, the auction went on, but we gathered an amazing amount of international support and made a definitive declaration that we are still here.

Colonization always beats a hungry drum of erasure, and for the Indigenous communities in every part of the Americas and beyond, our histories, stories, and rebellions live through our poetry. This month’s selections are two powerful anthologies that bring together myriad poetic voices from across the Americas, creating a map of our peoples, our hearts, and our futures. This, I would argue, is our most important map, one that unveils our very humanity but requires us to activate our inner compass and journey forth.

In September 2017, Hurricane María decimated Puerto Rico (Borikén is its original Indigenous name), leaving nearly 3,000 people dead (by one estimate) and causing a loss of power and running water which continues to this day, as it does on many Native American reservations. It also led to the displacement of many Boricuas, forcing more than 160,000 people to migrate to the mainland. Throughout, the federal government has offered little aid.

The collective grief of Boricuas was, and still is, unfathomable. As the editors of the poetry anthology Puerto Rico en Mi Corazón (Anomalous Press) write in their introduction: “When the storm hit, that’s where we began to build — an immaterial way to survive the very material grief of our own survival.”

Carina del Valle Schorske, Ricardo Maldonado, Erica Mena, and Raquel Salas Rivera spearheaded a huge and vital project with this gathering of Boricua voices from the archipelago and mainland diaspora, understanding that these poems, whether originally written in English or Spanish, already exist in both languages. They did the delicate work of translating the poems, but as they attest, “Ours is one culture whose bleeding edges cannot be bandaged. Ours is a tongue forked by cutting.”

The poems here are as varied as our gente and their experiences, from Martín Espada, whose “Flowers and Bullets” marries Cuba and Puerto Rico in our struggles for freedom from colonization through our flags (inverse of each other’s colors), to Pó Rodil, whose “Queer as in Strange” fights to reclaim the self from the trauma of being misgendered: “I want to fill myself with glitter,/fill myself with love.”

So many of these poems pulse with grief and protest against the forces that seek not only to silence but to exterminate; they hold a will both to survive and to celebrate our existence. In Jennifer Maritza McCauley’s poem “Blackout,” the speaker reckons with her physical estrangement from the island during the hurricane’s aftermath:

“Tonight, I think about my mother’s island
heavy with the weight of mainland,
which shares the colors of the Boricua flag,
the red-blue-white
we are so proud to ink on our breasts,
to stitch on our stomachs,
because we make these colors
fit our brown skin right.”

Natalia Villarán’s brief and beautiful poem, “From the Outside/North,” closes the collection with an existential yearning amidst the new chaos of a post-María life that still casts a defiance: “Alone and directionless./Finite and indefinite,/with my blood constantly drowning out my sobs./But I am still here.”

Maps also tell the stories of aftermath, for it is the victors who rename what has already been named. And so Joy Harjo, the 23rd U.S. poet laureate, decided her signature project would be to re-map our country and surrounding area through the writing and languages of Native Nations poets. Thus, Living Nations, Living Words: An Anthology of First Peoples Poetry (W.W. Norton) — with its interactive online map and gathering of poems from 47 poets grouped in three key directions: Becoming/East, Center/North-South, and Departure/West — came into being in coordination with the Library of Congress.

Harjo writes in her introduction: “Each poet chose their poem based on the theme of place and displacement, and with four touchpoints in mind: visibility, persistence, resistance, and acknowledgement.” This is where the reader enters, tasked with the responsibility of approaching these poems as, in Harjo’s words, a “crossing place.”

We sense, as outsiders, that we are being given special permission to enter into these lands/spaces/languages. But we must be respectful as we experience these poems from the sidelines, knowing we will not understand everything but grateful for the bridge to understanding being offered.

The breadth of the geography of peoples featured here is truly astonishing for such a contained anthology, and one can barely scrape the surface of its wholeness. In Craig Santos Perez’s “Off-Island CHamorus,” a teenager who migrated to California from Guam must prove to his new teacher that his ancestral homeland exists:

“And when I stepped in front of the world map
on the wall, it transformed into a mirror: the Pacific Ocean,
like my body, was split in two and flayed to the margins. I
found Australia, then the Philippines, then Japan. I pointed
to an empty space between them and said: ‘I’m from this
invisible archipelago.’ Everyone laughed. And even though
I descend from oceanic navigators, I felt so lost, shipwrecked”


In “These Rivers Remember,” Roberta Hill of Oneida Nation writes about the land of the original “Center of the Earth,” before the violent intrusion of capitalism, and how the ancient elements of water and wind still unite the people.

“Thirteen Ways of Looking at an Indian” by Anita Endrezze of the Yaqui, Pima, and Maya, deconstructs racial stereotypes of the physical appearance of Indigenous people when they are mixed, aptly invoking the trickster god Coyote: “I grew up half white, but/Coyote’s shadow is moody, dark-twin/to mine.” And M.L. Smoker of the Fort Peck Assiniboine and Sioux sounds a war cry from the countless Indigenous women whose lives have been stolen in “The Book of the Missing, Murdered and Indigenous — Chapter 1”:

“She stitches together the collective story of origin,
her body a map: descended from the stars”

As intended, this anthology is much more than a collection of poems; it is a map to worlds outside and within, and it cements the First Peoples here and now as people, not an assimilated myth. As Harjo wrote in an early poem, “Grace,” from In Mad Love and War, “I know there is something larger than the memory/of a dispossessed people. We have seen it.”