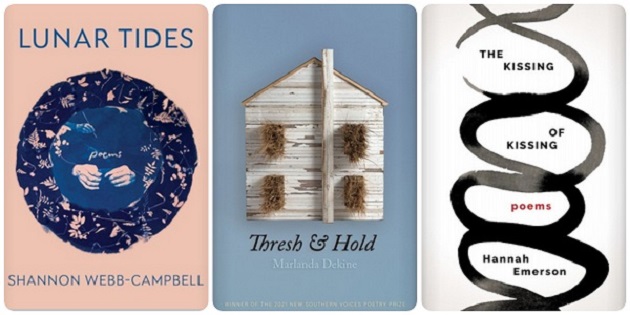 The explorations of origin, place, and belonging are major themes in contemporary poetry and allow poets to cross and remake boundaries, or rid themselves of any constrictions at all, creating new landscapes through language and form.

It can create an important tension between poem and reader when the poet challenges widely accepted worldviews, and this friction, which sometimes manifests as discomfort or even disorientation, is where the potential of poetry’s capacity to remake reality resides. It is where we, in order to fully engage with the poem, must accept the poet’s viewpoint as absolute truth, no matter how much we might wish to reject it for reasons pertaining to our own lives or privilege.

And if one’s origin negates their ability to belong? Poetry can function as the place to carve out a home that may only exist for the poet inside their work.

This month’s featured collections are each unique in style and subject matter but explore these ideas of origin, place, and belonging in interesting ways — owed, in part, to their own distinctive identities and origin stories. The poets invite us into their poems’ rich interiors but ask us for an honest exchange before we exit, transformed.

Canadian poet Shannon Webb-Campbell’s third collection, Lunar Tides (Book*hug Press), shapes itself around the lunar cycle — the book is ordered in sections beginning with New Moon and ending with Waning Crescent — and follows its pull on the ocean, which is both a physical place and a metaphorical home. The connection of poet to ocean is constant, like the ebb and flow of the tide.

Webb-Campbell explores the idea of “mother” as meta-origin birthplace/home and also the literal mother of the poems’ speaker, who is grieving her own mother’s death. The book begins with the three-part “Time: A Biography,” where she deconstructs the idea of linear time by experiencing the speaker’s birth and life through her mother’s dying, death representing both end and beginning. The poems in this section also track time as the movement of the ocean; the new moon and full moon cause the strongest tides due to the earth, moon, and sun all lining up.

In “Tides,” whose form echoes the low and high tides’ push-pull and revolves around a whale’s carcass washed ashore, she writes, “humans believe logic is time/we’re all shift workers/here on the lip of the Atlantic.”

Webb-Campbell, who describes herself as “a mixed Indigenous settler poet,” also contends with a First Nation identity handed down by a father who has not been a part of her life. She has to learn about her heritage as an unintentional stranger at the mercy of her father’s absence and the erasure of colonization. In “Our Little Girl’s Book,” she writes, “no gifts from my paternal kin,/save for Mi’kmaq blood, something no one/wrote down,” while her mother’s side is full of known history.

It is in these bare branches of a family tree that the poet strives to write her origin story, even if only from her own anger. In “If I Wasn’t a Fury,” she writes:

Marlanda Dekine’s Thresh & Hold (Hub City Press) also traces origin through family, land, and identity, though their history is bound to the South Carolina rice plantation that enslaved their ancestors and still holds a dark animosity toward Black residents.

In “I Am Bound for De Kingdom,” Dekine writes about their grandfather being born on the Nightingale plantation, which still exists. Their father warns, “if I get out of my car on Nightingale land,/the folks who own it might shoot.” It forces the reader to experience the continual otherness of not only being forcibly brought to a place, but also knowing it can never be yours according to the white-supremacist foundations this country was built upon.

But Dekine also upholds the strong matriarchs of their family, speaking truth about the solidity and learned violence of the patriarchs while mixing in Christianity and the original faith practices many Black and Indigenous people deftly hid within colonizers’ religion. In “First Lady of the Church,” they write, “Grandma Thelma turned trees into so many things./She’d disappear into grapevines unbothered by snakes,/return with her brown hands, purple and wet.”

The collection encompasses the search for self through resistance to patriarchal norms — particularly in regard to gender — as well as the decision to love oneself in defiance of the structures, strictures, and histories that demand you not be different or challenge the status quo. As they write in “Perhaps I Am a Fugitive of Empathy”:

I’ve been sitting with my grandmas
in their photographs,
while wafting frankincense and myrrh,
and I’ve been thinking about what Giovanni said to Baldwin
in that resurfaced interview on the language of love:

A testament to the idea that poetry is truly the root of human connection via language is The Kissing of Kissing (Milkweed Editions), a groundbreaking collection from neurodivergent poet Hannah Emerson. The raw beauty of each individual poem — and the entire book — is stunning and absolutely confident in its structural integrity.

Emerson, who is has nonspeaking autism, invites us into her worldscape and declares in the book’s first poem, “Becoming Mud”: “Please love poets we are the first/autistics. Love this secret no one knows it.” And isn’t this the alchemy of poetry — its ability to shape worlds through words in uniquely individual ways?

Using the foundational concept of “kissing,” which can be interpreted as touching, connecting, or even just feeling, Emerson invites us into a deep forest not of imagination but of being. In “I Live in the Woods of My Words,” she writes about how language is not simply a tool of communication but an entire universe of being: “The words fall/from the sky like snow/on this day. They become/the floor of the forest./The ground from which/all things grow into/the towards.”

The poems’ subject continuously yearns to find their way back to the beginning of everything, where we are all “kissing” in the spiritual light of where we came from — the origin place of all beings. That evocative need to merge back into that “light” is genuinely powerful. As she writes in “Keep”:

Love the light nice
let it in. Go into
the halo. It is hotter
there. Look beyond it
to find your place
in the womb.