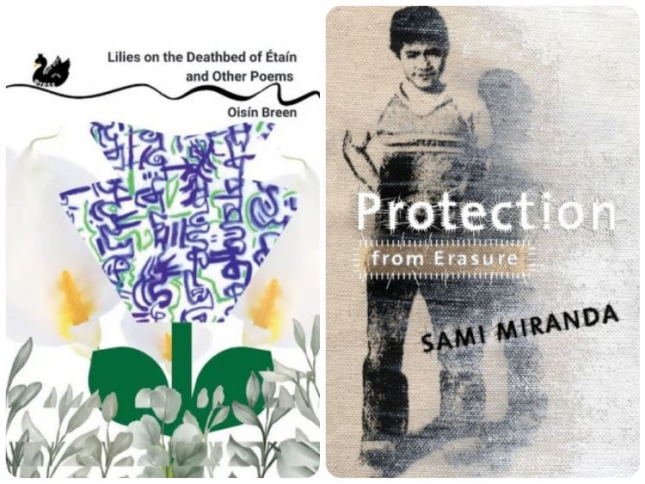 One could consider the year’s beginning an opportunity to engage in a new conversation with our environment and intentions going forward. But it’s also, as we are now deep into winter, a chance to pause, reflect, and rest. Well, rest as much as possible while negotiating a world spinning rapidly as we look for places to focus and catch our breath.

At times, I find reading poetry akin to a deep mineral soak, much needed and replenishing. Lately, though, it’s a little challenging, too — both the reading of it and the words themselves. This is likely due to my personal circumstances (parenting is no joke, y’all).

Regardless, stopping to sit down, settle, and focus on poetry is simultaneously an act of meditation and conversation. And that’s what is on my mind with these two collections. Though they could not be more disparate in content, they each invite conversation and deep reflection even as they offer forward momentum.

When Oisín Breen’s recent collection, Lilies on the Deathbed of Étaín and Other Poems (Beir Bua Press), hit my inbox, I couldn’t resist putting it at the top of my list. I’ve wanted to read more contemporary Irish poets because I find their work truly groundbreaking. And why not? Ireland has an enviably rich literary history and boasts some of the world’s greatest poets, from William Butler Yeats to Eavan Boland.

This goal was fostered by my current obsession with Irish poet and author Doireann Ní Ghríofa, who wrote the memoir A Ghost in the Throat and whose poetry I want to float in forever. Plus, I’ve had the ending lines to Yeats’ “The Second Coming” in my head ominously on repeat for two years. (Yes, I get poems stuck in my head the way others gets catchy songs stuck.)

I found Breen’s collection challenging in two good ways: First, I didn’t understand many of the references in his brilliant, epic, multipart, experimental poems, so I had to Google a lot. This led to a delightful time learning about tales of cursed lovers, centrally Étaín and Midir, woven throughout Breen’s title poem, “Lilies on the Deathbed of Étaín,” which uses feverishly gorgeous, musical language to investigate the dimensions of desire and loss. You pick up the influence of Yeats, T.S. Eliot, and others in Breen’s form and love of allusion, yet his poems still retain his own powerful voice, as evidenced in the beginning of Part II of “Lilies on the Deathbed of Étaín”:

“There is, however, a verse that is incumbent on us to repeat:
of blessed hunger,
and enduring until we die.

My second challenge was giving myself to the poems. Breen’s form and formulation require the reader to surrender to the verse — which, for a poet like me used to brutally controlling not only my writing but also my reading of poetry, is a terrifying trust exercise. But we need that; we need to be swept away by poetry like driftwood onto the open sea by the tide.

These poems require multiple readings — along with fortitude and courage from the reader — because Breen is doing something innovative and important here. But his language…ah, his language. He has a gift for grabbing the reader by the throat and tossing us into the storm. The sound of “The Love Song of Anna Rua,” which is both a spell/prayer and an examination of life in all its permutations, is genuinely powerful, beginning with the rhythmic, repeated chant starting in Part I, and later in its nod to “The Hollow Men”:

“AND THIS IS HOW WE BEGIN AGAIN.
WE BEGIN AGAIN WITH EUPHORIAS,
GLORIAS, MORATORIA, AND OUR FOOTSTEPS,
WHICH JUST NOW HIT A BEAT.”

Music is also central to DC Boricua poet Sami Miranda’s work; he often reads his poetry accompanied by bassist Pepe Gonzalez and other musicians. Though Miranda references actual songs throughout his latest fierce and tender collection, Protection from Erasure (Jaded Ibis Press), you can also feel and taste the rhythms of his native Bronx. From the pavement to the street to the projects, it’s a celebration of the city and an homage to the culture, art, faith, food, and ancestral magic of the islanders who made it what it was and is today.

Reading Miranda’s poetry, much as viewing his art, is like glimpsing a home I both know and can never know, my own NYC Latinx diaspora roots deep but unfamiliar since I grew up half a country away. He writes about this journey of migration/immigration forced by circumstances — and, for African ancestors, straight-up forced — in “Strong Currents Bring Us Here,” which references the La Sonora Santanera song “Botecito de Vela”:

Miranda is also a multimedia artist, and some of my favorite parts of Protection from Erasure are the ekphrastic series in conversation with photos and prints by Horacio Valdez, Karen Miranda Rivadeneira, Marta Perez-Garcia, and others. “Mal de Ojo,” based on Rivadeneira’s “Mom curing me from evil eye,” delves into the common affliction of what many Latinx cultures call “evil eye,” which can be cured by our folk healers (referred to as curanderas in some traditions), sometimes with egg limpias, hauntingly referenced here:

“Maybe a mother, who knows
the power of crucifixes, el divino niño,
and an egg touched to a body
dressed only in its skin,
curandera who understands the rezos,
los siete jarabes, florida water,
sage, and tobacco”

Protection from Erasure is a wonderful, cohesive collection from a poet at the top of his game.

A monthly column reviewing recent books of poems and books about poetry.