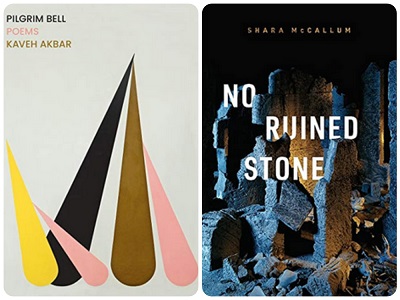 Once again, I find myself in August — at summer’s end, when the light begins to slowly creep out of the days — pondering the many ghosts that chase us beyond campfires into the dark woods.

Shadows can take any form, from addiction and religion to history or ruptured childhoods. This month’s selections delicately catch and dissect the poets’ shadows and mount them onto the page as if preserving butterfly specimens behind glass — beings of exquisite beauty at first glance that soon reveal the macabre reality of their lifelessness.

What exists in shadow is the totality of lived experience: every weird, sensual, mystical, slanted bit of the world pooled into the corners of our minds. From that darkness comes a powerful sense of reverence for what is, what could have been, and what’s to come.

It’s been half a decade since the release of Kaveh Akbar’s powerful debut collection, Calling a Wolf a Wolf, which laid bare a journey of addiction and recovery. His eagerly anticipated follow-up certainly doesn’t disappoint. Pilgrim Bell is a brilliant study in the tensions among traditional religion, faith, and modern spirituality; among first-generation immigrant children, family, and homeland; and much more.

The speaker in Akbar’s poems is indeed a pilgrim, definitionally “a person who journeys to a sacred place for religious reasons,” yet who constantly redefines what those places and reasons are, refracting reality through a deeply personal lens. Pilgrim can also mean “one who wanders,” which is how the reader is positioned within the book, wanderer to wanderer.

Six versions of the title poem, “Pilgrim Bell,” take us on a constantly shifting journey of a man contending with his faith amid the silence and/or absence of God. The second version begins, “My savior has powers and he needs./To be convinced to use them./Up until now he has been./A no-call no-show. Curious menace.”

Each poem balances the spiritually ethereal with the earthiness of details, such as “Two beefsteaks./Ripening on a windowsill.” and “Can you see the wet./Azalea quivering./On its vine.” The form is purposefully stilted, with parts of what would be single lines cut into short sentence fragments capped with periods, creating a staccato, as if the speaker is repeatedly banging into the walls of his interior landscape and speaking while out of breath.

These poems are ultimately a devolution of self, the moments when the true believer exits his certainty, faces the shadow of uncertainty, and must grasp what is tangibly in front of him. The sixth version ends with a confession and plea:

I am so vulnerable.
To visionaries.
And absolute.
Certainty.

Tell me how to live.
And I will live that way.

We also see the speaker’s almost desperate yearning to replace addiction with something meaningful, perhaps his family’s religion, in the poems “Seven Years Sober” and “Escape to the Palace.” In “Despite My Efforts Even My Prayers Have Turned into Threats,” the poet writes, “Holy father I can’t pretend/I’m not afraid to see you again.”

Then, in poems such as “Reza’s Restaurant, Chicago, 1997” and “My Father’s Accent,” Akbar examines the search by the children of immigrants for belonging in a land made foreign by the fact of their families’ foreignness; often rejected by both their parents’ birthland and their own, they wander as eternally displaced ghosts or shadows. The expansiveness of this book lends itself to multiple re-readings, which is exactly how great poetry roots itself in our collective imagination.

How we confront the shadows of the past is at the heart of Jamaican poet Shara McCallum’s No Ruined Stone, an evocative collection of speculative narrative poetry inspired by a trip to Scotland, where she unearthed records revealing that the country’s most celebrated poet, Robert Burns, once booked passage on a ship to work on a slave plantation in Jamaica.

Though the voyage never happened, McCallum imagines Burns’ journey and subsequent actions as a “bookkeeper” (she writes in a note that, under that position, he would’ve been directly involved in operating the plantation).

From there, McCallum contends with her own Latinx, African, and European ancestral heritage through a conjured world in which Burns has a light-skinned granddaughter with a slave who subsequently leaves for Scotland as a young adult to live a life of disguise as a white woman.

Burns is physically present in the first part of the book, titled “The Bard: Jamaica, 1786-1796,” having barely survived the journey to the island. In “Voyage,” the poet tells of a debilitating illness that nearly felled him:

Life itself became a disease
aboard the Bell, passage to Jamaica —
first landing in Kingston, my illness
at sea gave way to a greater unhinging.

During his time on the plantation, Burns, who’d left a wife behind in Scotland, becomes obsessed with the enslaved woman, Nancy. In “For Promised Joy,” he dramatically claims, “Suffer me/to ask love to dwell/in a place not meant/for love’s habitation.” And in “Augur,” we meet his daughter, Agnes, whom he only refers to as “the child,” and who evokes the premonition that the enslaved workers will revolt, as they had in Haiti.

It is the poems told from the point of view of Isabella, Burns’ granddaughter and the daughter of fellow Scotsman and plantation owner Charles Douglas, in the book’s second part that are most striking and profound. This is also where we see a movement of form from one-stanza narrative poems to more experimental, spacious lines representing Isabella’s inner monologue.

Going to Scotland meant having to play a constricting part, which, if exposed, could prove disastrous for Isabella and those traveling with her. In “The Choice,” she reckons — especially to the memory of her beloved mother — with the consequences of her deception: “When there is no choice/there is still choice/forgive me my trespasses/my past this present/forgive me all my ancestors.”

Burns haunts his granddaughter’s steps as she navigates a world in which he is considered a national treasure. In “The Bard, Edinburgh, 1825,” McCallum writes in Isabella’s voice that “Everywhere I turn, you ghost this city” and is candid in her assessment of her grandfather’s ultimate legacy:

I, your unclaimed kin,
asking words to perform the impossible:
to return the past whole. No,
truth be told, not whole but
the absence of you, that abscess in me.

January Exemplars: Books for the Turn of the Year

A poet's perspective on The Collected Poems of Samuel Beckett.