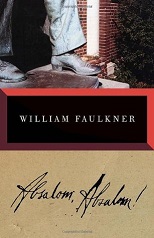 These sentences (which begin simply enough, with a name — Sutpen, perhaps, or Quentin, or Miss Rosa — or a pronoun, or a carriage rattling down a hot dusty Southern road, or the smell of wisteria and cigars and the white hand of Quentin’s father resting by a letter — one of two letters mentioned in hazy wisps of a memory of a memory, or perhaps in a recitation of another’s memory of having read such letter, a letter (from Charles Bon? from Quentin’s father?) which we will actually read, or hear read, in memory or in a recounted present, a retelling, a remembrance from someone having read it, or told of it, 100 pages later; and how can we actually be sure that we’ve understood the letter at all, having not read it ourselves, but through Quentin, who is prone to drifting off, and a letter, at that, without date or signature, but we must assume is Bon's, or is it that we understand the letter all the better for having seen its multiple meanings and mysteries, its effect on the minds and lives of so many people — or his pipe, which Quentin remembers with a sense of nostalgia, if not affection, as he lays himself and his South bare to the astonished young ears of a shirtless Canadian college roommate, whose pink skin and “smooth cupid-fleshed forearm” and heavy breathing Quentin seems to notice repeatedly; but then the motto of the whole book seems to be “repeat,” as though we are reading in a swirling spin cycle of sense and memory looping back upon itself again and again, and we’re not on gentle cycle either, as the reader is plunged from the very start into a saga not so much of passion and dynasty as of doomed ambition and decay set against a backdrop of the crumbling Civil War-era South, a South inevitably toppled by the corruption of the immoral institution of slavery (and it is interesting to note Faulkner’s use of the word “morality” in quite a different way when reflecting upon supposed motives for Sutpen’s ruthless accretion of money and respectability and offspring (“supposed” because we never hear Sutpen directly, but hear him only through a recollection [Quentin’s] of a recollection [his father’s] of a recollection [his father’s father’s], and sometimes through a recollection [Quentin’s] of a recollection [his father’s] of a recollection [his father’s father’s] as retold by said shirtless [remember his skin] Canadian roommate), the toppling of which we see in parallel with the toppling of Sutpen’s empire, Sutpen’s Hundred — which is by no means to be conflated with A.A. Milne’s whimsical Hundred Acre Wood, as the animals on Sutpen’s Hundred are not stuffed, but “Negro,” as in “Sutpen’s wild [n-words],” a phrase including a word whose frequent use in the novel must be read through a historical lens, which must (must?) of course be read as a reflection of the character (author?) in whose mouth it is placed (written?), and the era in which the word would have been so boldly said (or written?), and the place in which the characters (or the author?) lived — not Milne’s Hundred Acre Wood, then, but Sutpen’s Hundred in Faulkner’s South (or world?) where woman is property, other, void; where young girls exist “in a pearly lambence without shadows and themselves partaking of it; in nebulous suspension held, strange and unpredictable, even their very shapes fluid and delicate and without substance; not in themselves floating and seeking but merely waiting, parasitic and potent and serene, drawing to themselves without effort the post-genitive upon and about which to shape, flow into back, breast, bosom; flank, thigh,” and Miss Rosa is a rotting spinster whose decaying flesh we smell again and again; where Ellen Coldfield is a token exchanged between her father and Sutpen, then a vapid gossiping shopper, then a dead dried butterfly; where her daughter Judith Sutpen is a silently waiting fiancée, “the blank shape, the empty vessel in which each of them [her brother and fiancé] strove to preserve, not the illusion of himself nor his illusion of the other but what each conceived the other to believe him to be — the man and the youth, seducer and seduced, who had known one another, seduced and been seduced, victimised [sic] in turn each other,” then blank-faced stoic recluse when her brother kills her fiancé, their mutual (unconsummated) love interest; and Charles Etienne St. Valery Bon’s anguish, born of being mixed-race, propels him to take a silent, animalistic black hulk of a “Negro” wife — keeping in mind of course that this is a piece of literary history, that we are reading this in lit class not as a guide to the mindset of the author, or even as an example of desirable writing in the present day (for, while I would not exactly be laughed out of my writing workshop for producing such a manuscript, I would be quietly, politely, humanely, but firmly advised to re-examine my submission, which would be handed back to me with multiple (almost all?) passages circled and notated with comments like “run-on” and “tighten” and “Are you sure about that exclamation point on the title?”), but as an exemplar of the canon, that canon which is now being examined and, yes, exploded, but with which we are still required to be familiar, the masterful standard held ever aloft, even if accompanied by others, always and still to be read and revered, so what, indeed, can one say?) are really freaking long.

Tara Campbell is a DC-based writer currently attending graduate school. The views expressed in the execrably long sentence above are her benighted own and do not reflect the more fully developed perspective of the MFA program of which she’s a part.

Now it’s time for the rest of the story…