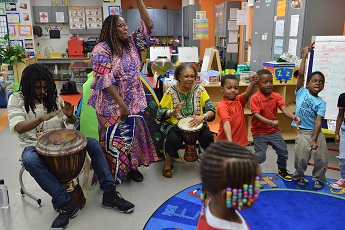 One night in mid-20th-century England, little Roger lies down and, after kicking the sheets off in his hot bedroom, goes to sleep. The next morning, he wakes up in medieval England, looking at the besieged castle of Torquilstone.

Excellent, he thinks, as he approaches the high stone walls. If only he were wearing shoes.

The castle of Torquilstone, of course, is really from Sir Walter Scott’s Ivanhoe, and Roger is Edward Eager’s main character in the children’s classic Knight’s Castle. Roger has had the tremendous luck to stumble upon a bit of magic that transports him back to Ivanhoe’s 12th century.

In some ways, I feel as if my life were divided into before and after Knight’s Castle, which I read in fifth grade (nearly 40 years after it came out). Before, I loved reading. After, I loved history. With a passion. Today, I write historical fiction.

The books children read can and do change their lives. But not every child has access to them. Of course it’s possible to thrive without a young love of books (I know a man who didn’t learn to read until he was 10, and today he holds a Ph.D. from Yale), yet it’s clear that, on average, early literacy helps promote academic success and access to knowledge.

Ingrid Zimmer, executive director of Inner City-Inner Child, is a fervent believer in childhood literacy. Her organization brings arts-driven literacy to preschool programs in Washington, DC, and she’s so in love with the work that it’s the only job she has had in her 25 years since graduating college.

“Literacy is such a big issue,” she says.

When Ingrid’s mother, Connie Zimmer, who had helped found Dumbarton Concerts in the 1970s, wanted to expand access to classical music and the arts, Connie realized there were no books in the childcare centers they visited.

The performing artists involved in Connie’s program quickly decided that everything needed to start with literacy. “The artists said, let’s make the books come alive,” Ingrid explains. So they built a performing-arts program around preschool books.

“When the children sing a book, dance a book, they really embody the book,” she says. Ingrid herself was a dancer at first, and she brought her dance experience to the literacy programs her mother was designing.

Inner City-Inner Child selects illustrated books with limited words and beautiful artwork, so the kids have space to be creative and take an active role in interpreting and creating their own imaginative worlds. Teaching artists visit community preschool classrooms in under-served areas to work with the children to move and sing around the story.

“We don’t come in and teach the children choreography,” Ingrid says. Instead, the program asks the children to come up with their own movements and interpretations.

In 2017, Inner City-Inner Child served over 3,500 children in DC, and donated 3,200 books. (If you’re needing a dose of cuteness today, check out their video. At around minute 4:30, the kids get backpacks with their own copy of the book they’ve been interpreting.) The organization also works to train teachers in literacy techniques.

“When you really engage children, all the behavioral issues disappear,” Ingrid says. “They’re so in tune with this kind of work. Play, dance — that’s what pre-K should be about.”

Though Ingrid says she doesn’t really have bad days, she does worry that the arts are undervalued in curriculum and early education. Inner City-Inner Child works regularly to make the case connecting artistic engagement and literacy to the foundations that fund their budget.

“Big programs really need the arts infused back in,” she says. “There’s so much drilling, making children not feel excited about learning.”

Fortunately for DC’s kids, Ingrid and her staff work hard every day to get children excited about reading.

“We inspire lifelong love of learning, books, and the arts,” she says. “Once you have that, it can unlock a lifelong passion.”

Here’s to that, says the girl who’s still storming Torquilstone’s walls in her imagination.

Carrie Callaghan’s debut novel, A Light of Her Own, is — of course — historical fiction, and it’s forthcoming in November. If you’d like to support Inner City-Inner Child, they welcome donations. And if you’re in the DC area, the Concerts by Candlelight at Dumbarton are sublime. Carrie will see you there. (Or on Twitter.)