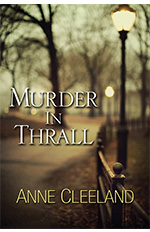 Looking for an author to replace Elizabeth George? I have a very likely candidate. Murder in Thrall is a debut British police procedural with all the bells and whistles I have been looking for. It features two very unusual protagonists. Kathleen Doyle is a young, fresh newbie female detective with attitude who, unlike Detective Sergeant Barbara Havers in George’s books, is Irish and beautiful. Her boss is Chief Inspector Acton, a British Lord who is enigmatic, quiet, but brilliant and who has a rather awful secret obsession.

Doyle has a unique facility for determining the veracity of witnesses she encounters in their investigation of a series of brutal killings. However, Doyle is constantly put in her place. “Is there a rank below detective constable?” she asks. “Not at present,” is the reply. None the less, experienced and sophisticated, Acton insists that Doyle is the right person for his partner and insists that she be by his side at all times, a decision made both professionally and personally. Their work takes them from Scotland Yard to the pubs, alleys, horse stables, hotels and apartments of the wealthy and connected. At one point, they wonder if they are getting closer or further from the killer, or whether he has been under their noses all the time. Acton and Doyle’s relationship is a big part of the book, as the gap between their ages, class and experience levels creates much gossip among the cubicles at the Yard. One of the major reveals of the work makes you wonder how a second book could possibly have as much tension and impact as this first one. Don’t worry about that; give this debut a try. 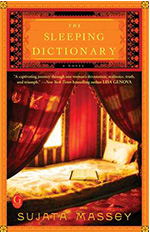 Many of her devoted readers have waited over 15 years for the publication of this suspenseful novel. Massey began her writing debut with the Agatha Award-winning Salaryman’s Wife in September 1997. It introduced Japanese-American amateur sleuth Rei Shimura, who has continued to delight us with her adventures in the U.S. and Japan for 10 installments. Janet Evanovich called Massey’s debut “a cross-cultural mystery of manners with a decidedly sexy edge.” There is no better way to be introduced to Japanese culture. Most of her readers are surprised therefore that Massey is not of Japanese descent. She is, in fact, of Indian and German heritage. For six years she has been working on her “Indian novel,” and what a beautiful thing it is. The main character is a young, lower-caste Indian girl torn from her family in a small village in India during a fearsome tsunami-like cyclone after World War I. Left adrift among the dead and dying after the storm, she clings to whoever will take her in. Eventually, she becomes a servant at a school where she is able to create a new life. She discovers that she has an ear for languages and makes her talent useful in addition to her other duties such as sweeping the floors and driving the fans with her feet.

As her journey sweeps her from the tiniest subcontinent village in the 1930s to the packed city of Calcutta in the 1940s on the brink of war, this orphaned girl proves she is a fighter, and her tale of survival, despite all her disadvantages of birth and circumstance, is inspiring. The writing is lush and sensuous, with colors, smells, flavors, and just the right amount of exotic and foreign words that don’t weigh down the narrative. Although not a mystery, Sleeping Dictionary is a suspenseful adventure with elements of romance and espionage that will appeal to a large audience, and is perfect for book groups. Check out Massey’s website for background and photos that relate to the book at www.sujatamassey.com. 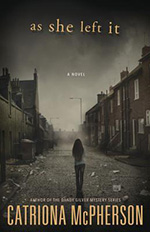 As She Left It

Scottish-born Catriona McPherson is another author who has taken a risk by breaking away from her much-loved series. She is known for her cozy traditional mysteries featuring posh amateur sleuth Dandy Gilver, for which she won an Agatha for Best Historical Mystery this year. However, As She Left It is about as far as McPherson could go from the upper-class drawing rooms of Scotland in the last century. Opal Jones is a young woman who reluctantly returns to the squalor of her hometown in contemporary Leeds when her mum dies. The “cottage” Opal has inherited has deteriorated beyond belief due to neglect during her mother’s illness and alcoholism. Her only joy is finding that her favorite neighbor Margaret is still on Mote Street, keeping an eye on everything. Opal soon discovers that there has been a tragedy on Mote Street. Margaret’s grandson disappeared without a trace 10 years ago. Margaret asks Opal for help in finding him. Opal takes it all on, sorting out the cottage and delving into the mystery with the help of quirky neighbors like nosey Mrs. Pickess and trumpet player Fishbo, her former music teacher. But in order to do all this, Opal must also confront her own demons on Mote Street, the reasons why, at 12, she ran away in the first place. Stark and bleak, yet funny, and deeply moving, As She Left It is a mystery of how secrets weigh down our lives and how the human spirit can overcome practically anything. This book is a total revelation from an author known for her humor and period detail.

Kathy Harig is the owner of Mystery Loves Company Booksellers in Oxford, Md. She received her MSLS from Catholic University in 1971. She opened Mystery Loves Company in Fells Point, Baltimore, in 1991. She was a branch manager at The Enoch Pratt Free Library from 1977-2001. She writes a monthly newsletter and has a weekly radio show on WCEI 96.7 FM.

Ted Bell tells us about artificial intelligence, a world run by machines, and the transcendence of 'thrillers' to the literary stage.