Casting off the chains of “genre” one release at a time 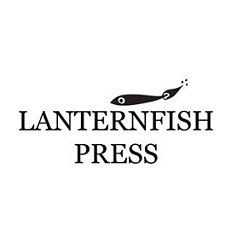 It is a little hard to pin down exactly what makes a Lanternfish Press book. In the Philadelphia-based press' short tenure, they've put out a classic reprint, a couple of works of genre-bending fiction, and even a coloring book. Editorial Director Christine Neulieb and Operations Director Amanda Thomas don't mind if readers are a little confused about their list.

"We aim to fill neglected spaces between genres," Neulieb says. "Like the gap between ‘literary’ fiction and ‘speculative’ fiction, or the one between popular and academic nonfiction. I always love when I’m at a conference and someone picks up one of our books and their forehead starts to crease, and finally they say: ‘I’m not sure what this is...but I have to have it!’"

Neulieb does say that Lanternfish's list so far has tended to run toward the gritty and the grotesque, challenging books that are also more entertaining than nihilistic.

"We don’t see why ‘serious’ literature can’t also contain magic and monsters," Neulieb says. "Across the globe and throughout history, most of it has. In practice, this means that things like fabulism, surrealism, magic realism, rollicking superhero stories with shrewd political commentary, or smart science fiction tend to catch our eye."

Lanternfish first started, however, with a reprint of the granddaddy of genre literature, Sherlock Holmes. Neulieb and Thomas met in Philadelphia just as the BBC series “Sherlock” was coming out in 2013 and decided to put out a newly illustrated edition of public-domain stories from the end of Holmes' career.

They funded the effort through a successful Kickstarter campaign and found an eager audience for the updated reprint. They decided to continue their partnership as Lanternfish, which was a combination of the names of two LLCs they had each already formed individually: Neulieb's Lantern Editorial and Thomas' Fish on Europa.

"I suppose if we’d realized then how far the venture would take us, we might have spent a little more time thinking about names, but then again, I like the symbolism of the lanternfish," Neulieb says. "It’s not actually that big scary fish, the angler — it’s a little glow-in-the-dark, deep-sea minnow with big luminous eyes. An unassuming creature to look at, but a massive portion of the ocean’s biomass and critical to its ecosystems. Books are like that. Reading fiction can seem unnecessary or self-indulgent when there’s so much work to be done, but it’s crucial for developing empathetic thinking skills and for sustaining civil society."

Lanternfish's upcoming list continues a budding tradition of unpredictable and compelling choices, including a fabulist novel and an essay collection about the "aching complexity of foreign aid work." Lanternfish also will seek out and reissue Victorian-era reprints, the next one a new edition of the surreal story collection The King in Yellow by Robert W. Chambers.

Neulieb says that challenging genre is important in literature and publishing, and is particularly critical for small presses.

"Capitalism segregates. It has to: In order to sell things to people as efficiently as possible, you have to separate them into convenient marketing demographics. And then you have to convince them to identify with the groups you’ve put them in, so they’ll stay there and keep behaving in predictable ways.

“In recent decades, this has been as true of book publishing as of any other industry. Breaking literature down into rigidly segregated genre categories doesn’t just stifle creativity, it builds ghettos. It decides what’s ‘mainstream’ and what’s ‘niche,’ and therefore who is mainstream and who is niche. So, breaking down genre barriers is more than just a stylistic choice. It’s a political act."

At the same time, Lanternfish is not looking to just make a statement through the books they publish; Thomas and Neulieb want to find the widest possible audience for the types of books that they have always wanted to read, yet have found in short supply among the larger publishers.

To this end, they are expanding their operations with a publicist and wider distribution for their titles. The press will be open for submissions again likely in the late summer, and Neulieb hopes to find more smart, surreal fiction and more nonfiction. But, overall, Lanternfish is looking for one shared characteristic on its list.

"The books have to be fun, too — that’s a requirement!" she says. "Being nerdy is great; challenging readers is great. We all need to be challenged by the books we read. But writers are entertainers first, and we most often succeed when we write as if our lives depended on the delight we give our readers — like the archetypal storyteller, Scheherazade."

5 New Kids’ Books for Kids Who Don’t Like Books

Have a reluctant middle-grade reader in your life? One of these unique titles just might bring him (or her) around.