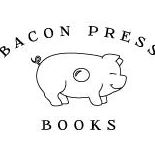 Not many publishers can say that its name was inspired by an obscure kitchen implement, but that’s the case with Washington, DC-based Bacon Press Books, according to publisher Michele Orwin.

“My husband collects old kitchen gadgets to use as bookends,” Orwin says. “One day, when we were in an antique store in Michigan, we found something that looked like an old iron with a pig on it and the words ‘Bacon Press.’ It was used to keep bacon flat during cooking. We’d never seen one before but thought if we ever started a press — it would be a great name. We bought the iron and the domain name.”

The idea of repurposing a bacon press as a bookend is quite fitting for Orwin’s press, which was originally conceived as a way to reissue books that had only been released in hardcover or had gone out of print, giving them a second life as e-books and paperbacks.

“I know quite a few writers and former students who have had hardcover books published that weren’t released in paperback or digital,” Orwin says. “I started the press as a way to give those authors a chance to reach new readers in new formats. I also know writers who have great manuscripts that never got accepted. I wanted to give them and other writers in the same situation a chance to have their work published.”

To date, BPB has released 11titles, including reissues of three books: Kate Blackwell’s You Won’t Remember This; Ann McLaughlin’s Sunset at Rosalie; and Judith Podell’s Blues for Beginners. But Orwin, who is a DC-based writing teacher and published novelist herself, has also put out eight other original works through BPB, divided equally between fiction and nonfiction.

“Each book I’ve published has a backstory,” she says. “For some books, I knew and respected the author’s work; for others, the author came recommended by a writer I trusted. Right now, the only link is that I try to produce books that adhere to the same standards and quality used by traditional publishers. In the future, I hope the link will be that I’ve given really good books a new life.”

One book that came via a recommendation early on from another BPB author, Danny Wynn, was Landfall by Joseph Jablonski. Orwin was thrilled to be getting referrals.

“It meant my half-way crazy idea for how we’d attract new writers just might work. Also, Joe had been a Merchant Marine captain, he was from Oregon — I’d be getting beyond the DC-NY writing scene. Three days later, Danny wrote to say Joe had died suddenly of a heart attack while visiting New York. He was only 56. I thought that was the end of it.”

But then Orwin got a call from Jablonski’s son Peter, who found her name on his father’s calendar. Peter said he knew it might be hard to publish a book posthumously, but he’d made a pledge at his father’s funeral that he would help fulfill his father’s dream of having his novel published.

“Fortunately, I thought it was great,” Orwin says. “A classic kind of novel. Reminded me of Joseph Conrad. Joe had been working on it for years, and it was in pretty good shape. Darlyn, Joe’s widow, had been Joe’s editor for years, so she was able to work with our editor in polishing the book. Peter, an artist, gave us one of his paintings for the cover; he also wanted to do the audio version.”

The collaboration was a success, and Landfall continues to find an audience. While not all the stories behind BPB’s books are that dramatic, Orwin finds herself driven by her reaction to each manuscript, leading to an eclectic slate that defies categorization.

“I keep being advised BPB should find a niche, and then along comes a book I really like that doesn’t fit into it and I can’t resist,” she says. “Our next book, Letting Go: An Anthology of Attempts, is a collection of life stories by 30 authors from seven countries. They write of their attempts to let go of everything from crippling grief and abusive boyfriends to dead husbands, fear of horses, old family homes, and piles of books and old papers.”

Orwin is also expecting to start a series of cozy mysteries and maybe even publish a cookbook in the next year.

“I started Bacon Press Books as a writer, not a businessperson,” she says. “That’s not necessarily a good thing if you want to earn a living.”

But it is great thing for authors hoping to give their books a second chance.

We here at the Independent love every piece we run. There are no winners or losers. Seriously, though, here are May’s winners.