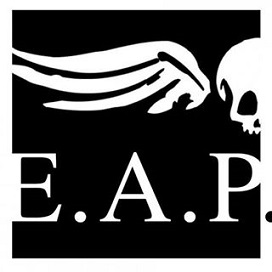 In Luis Bunuel’s 1962 surrealist film “The Exterminating Angel,” a group of wealthy socialites find themselves trapped at a dinner party. After the servants mysteriously disappear, the partygoers are unable to leave the mansion.

There is no discernible reason why they are trapped, and as their ordeal goes on, they become more desperate and depraved, giving in to their basest instincts. Near the end of the movie, they suddenly are able to leave the house, again with no explanation given, only to be similarly stuck inside a church.

While Bunuel stubbornly refused to explain the movie, critics have parsed the story as a parable about how the rigidity of hierarchical classes of society can lead to their own downfall. The idea dovetailed nicely with Tod Davies’ motivation for starting an independent press, leading her to name it Exterminating Angel.

“I'm passionately interested in how story forms culture,” Davies said. “I was working in indie film and as a social activist, but the best use of my time, I thought, was to support stories that shift the pattern from one of inevitable dominance/hierarchy to one of partnership.”

The Bunuel film also provided the inspiration for Exterminating Angel Press’ motto: “Just go out the damned door.” The tongue-in-cheek reinterpretation of the movie reflects Davies’ goal to publish literature that changes the narrative about our society.

While Exterminating Angel is very specific in its purpose, the press is flexible about genre. The existing catalogue of more than a dozen books includes social history, fiction, and even cookbooks. They also publish a regular online literary journal that adds poetry and cultural criticism to the mix.

“It's all different kinds of genres, but always with that slant,” Davies said. “You might say we're looking forward to a post-capitalist world. We don't know what it will look like. But we're certainly interested in participating in finding out.”

Exterminating Angel’s latest publication is the fourth book in the fantasy Arcadia series, Report to Megalopolis, written by Davies herself. The novels all focus on self-realization and empowerment. Publishers Weekly wrote about the most recent installment that “the misogynistic unreliable narration skillfully highlights Davies’s true message of social balance, respect for family, and faith.”

A nonfiction series from Mike Madrid traces the history of female characters in comic books. In the three treatises — The Supergirls; Divas, Dames & Daredevils; and Vixens, Vamps & Vipers — Madrid takes a critical look at the treatment of women in the medium from its early beginnings to present day. Exterminating Angel has also published historical works by Brian Griffith that re-examine the interpretations of Jesus’ teachings and the role of goddesses in Chinese society.

“I really think that the purpose of art is to explore new ways of being, to open up new vistas, to start new patterns, so that's where we land,” Davies said. “We're adding to the conversation in ways that I hope are creative for the future and strictly non-toxic for the present.”