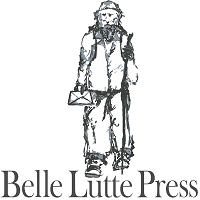 The name of fledgling Austin, TX- based publisher Belle Lutte Press can translate from the French as either “good fight” or “beautiful struggle.” For founding editor B. Lance Person, the moniker represents the essence of the press’ mission.

“Belle Lutte Press was birthed from a deep love for literature,” Person said. “Its creation was also motivated, unfortunately, by our contempt for modern mass entertainment. Rather than continuously complain that most movie studios, most television stations, and some publishing companies are shoving cheap reboots, sequels, reality, and celebrity worship down the public’s throat, we decided to fight back, attempting to produce original and intelligent content.”

For the foreseeable future, Belle Lutte is focusing on fiction. The press just released its first title, The Things of Man by Vince Wheeler, and has one more novel in the pipeline for 2016, the impressively titled The Arts of Legerdemain as Taught by Ghosts by Jim Naremore. Both cross-pollinate genre premises with literary storytelling in a manner that befits the motto of the press: Bringing Exceptionalism Back to the Masses.

“We aim to produce works that are accessible and enjoyable to people of all education levels and walks of life — well-priced trade paperbacks that read quickly and have exciting stories, while still containing intellectual prose and information,” Person said.

For Person, the goal is quality over quantity, which explains why the 2016 slate will be followed next year with three more novels, including Near Haven by Matthew Sirois. Belle Lutte is currently seeking work; information on submissions can be found on its website.

In the meantime, Person is excited to be part of the resurgent movement of small-press publishing in the U.S. He credits the openness that surrounds the independent publishing world with helping him get Belle Lutte off the ground; in particular, guidance from Derrick Brown of poetry press Write Bloody Publishing, who took the time to answer many of his questions.

“The literary community is so amazingly honest and helpful to one another, and it’s been a pleasure meeting members of the community and being able to tap into all of the resources available,” Person said.

Person also cites Two Dollar Radio, the well-known Columbus, Ohio, independent publisher, as a model he’s hoping Belle Lutte can emulate. Looking at Belle Lutte’s start so far, it would seem this small press is well on its way.