Circles of Madness not only introduced me to an extraordinary poet but launched a lifelong literary friendship. 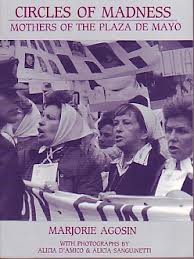 I knew the poetry before I knew the poet. In the early 1990s, when I was book review editor of Américas Magazine, I received a volume called Circles of Madness by the Chilean author Marjorie Agosín — a profoundly moving collection that articulated the anguish of the Mothers of the Plaza de Mayo, whose children disappeared during the “dirty war” in Argentina (1976-1983).

Other books by Marjorie followed, including Generous Journeys (1992), Dear Anne Frank (1998), and The Angel of Memory (2001). At some point, after a particularly glowing review, the poet sent me a thank-you note. That’s how we met.

Over the years, Marjorie has continued to produce remarkable poetry collections. I recently reviewed two of them for the Independent: The White Islands (2016), a commemoration of the Sephardic Jews whose communities were devastated during the Nazi occupation of Greece, and Braided Memories (2020), a celebration of Marjorie’s great-grandmother, who escaped Nazi-occupied Vienna and settled in Chile.

Marjorie has also published prose: for example, the highly influential collection of essays Scraps of Life (1987), which elucidates how the arpilleristas (embroiderers) in Chile used their skills to combat the Pinochet dictatorship, and Ashes of Revolt (1996), which highlights human-rights abuses in Latin America.

She has championed women writers and artists who have largely been overlooked with literary anthologies such as What Is Secret (1995) and edited essay collections like A Woman’s Gaze: Latin American Women Artists (1998).

However, she is, above all, a poet. For Marjorie, poetry is a basic human impulse. “We are defined by language, by our ability to evoke sentiment through words,” she says. “Since ancient times, people have told stories through song and poetry. Writing poetry about difficult events such as the Holocaust brings me closer to an understanding of them. The Holocaust was a time when the very nature of language was altered, when it was difficult to name the world because the world as we had known it no longer existed. Yet poetry helped save us through of works of Primo Levi, Paul Celan, and others. Poetry has been my guardian angel — unobtrusive, magical, inexplicable. It is part of the ineffability of human nature.”

The overarching theme of Marjorie’s writing is memory — the need to keep alive the memory of those who have been lost to mindless violence and to preserve, through practice, the cultural traditions that bind us to the past, unite us in the present, and give us hope for the future. A concern for social justice is an ongoing leitmotif. Her writings on dehumanizing economic practices, such as the maquiladoras (border factories that exploit a mostly female workforce), have won her international recognition as a human-rights activist.

Her Jewish heritage is a constant in Marjorie’s writing. “I grew up in a secular Jewish world,” she explains. “My parents were tolerant and not very religious. I have a strong awareness of belonging to an ancient people, but my Judaism was also informed by the values of tolerance. I have never felt at home in the American religious milieu. I belong to the Comunidad Judía de Valparaiso, which my grandparents helped create — a highly inclusive community with many mixed marriages. This is a community where I feel I belong.”

For Marjorie, activism and poetry are inseparable. “Poetry is not a mere aesthetic exercise,” she says. “The idea of a poet in an ivory tower does not resonate with me. I am a dreamer and also a doer. I want to create a community of readers of poetry that desire to transform the world and understand one another without personal and political dogmas. For me, poetry, concern for human rights, and activism spring from the same passion.”

Recently, Marjorie has turned her attention to young adult fiction. Her novel I Lived on Butterfly Hill (2014) recounts the ordeals of 11-year-old Celeste, whose parents send her to the United States to protect her from the violence of a brutal dictatorship. In the sequel, Maps of Memory (2020), Celeste, now 14, is back in Chile and resentful of parents who “abandoned” her during the years of tyranny. Her attitude changes, however, when she learns that the despot's men arrested and tortured her mother and “disappeared” some of her classmates.

At her school, Celeste proposes the creation of memory maps to help the children cope with loss. They will visit and place markers at places once frequented by their missing friends, not to commemorate deaths, but to serve as symbols of hope that some of these children will be found. Celeste’s activism leads to the recovery of two children and initiates the healing process for her traumatized mother.

Maps of Memory raises important questions for adults, such as when and how to speak to children about evil, pain, and death, and the importance of activism. Although it will be obvious to adults that Marjorie is writing about Pinochet, she wisely avoids mentioning the name of the dictator. Countless children all over the world are coping with institutionalized violence; by anonymizing the dictator, the author universalizes Celeste’s story. Maps of Memory was named one of the best YA books of 2020 by Kirkus.

As a poet, Marjorie has spoken to me through her vivid imagery and her message of hope. As a friend, she has heartened me with her warmth, generosity, and unflagging optimism. Over the decades, our friendship has deepened, thanks to our mutual love of the word, shared spiritual roots, connection to Chile, and commitment to women’s writing. We have supported each other’s projects, shared advice on publishers and publishing, and spoken at each other’s universities. We have spent long hours discussing religion, and it is thanks to Marjorie that I have come to appreciate my own complicated spiritual heritage.

A major concern for both of us is the consequences of war, particularly for women and children. Marjorie contributed a selection of poems to my forthcoming book, Collateral Damage: Women Write about War, a collection of war-writing by women from all over the world.

With our friend, Romanian author Domnica Radulescu, we have recently created A Muse of Our Own, a women writers’ collective. Marjorie explains, “I write from the perspective of my gender, of the things I experience as a woman. We’ve always struggled to make our voices heard. The goal of Muse is to foment women’s writing and help one another gain readership. Literature is about trust and inclusiveness, and this collective was born out of trust and love.”

Together, Marjorie and I have laughed over the antics of pretentious academics, cried over the current political insanity, and shared our admiration for beautiful writing. Every writer needs a friend like Marjorie to help her bear the frustrations and loneliness intrinsic to the trade.

Bárbara Mujica, a professor emerita at Georgetown University, is a novelist, short-story writer, essayist, and scholar. Her novels include the international bestseller Frida, based on the relationship between Frida Kahlo and Diego Rivera, Sister Teresa, based on the life of Teresa of Ávila, and I Am Venus, which explores the identity of the model for Velázquez’s Rokeby Venus. Her collection of stories, Far from My Mother’s Home (Spanish edition: Lejos de la casa de mi madre), focuses on the immigrant experience. Collateral Damage, to be published next spring by the University of Virginia Press, is an edited collection of women’s war writing, and Imagining Iraq contains short stories told from the perspective of the mother of a veteran. Mujica has won several prizes for her short fiction, including the E.L. Doctorow International Fiction Competition, the Pangolin Prize, and the Theodore Christian Hoepfner Award for short fiction. Three of her stories and two of her novels have been winners in the Maryland Writers’ Association national competition. I Am Venus was a quarterfinalist in the 2020 ScreenCraft Cinematic Novel Competition. Her latest scholarly book is Religious Women and Epistolary Culture in the Carmelite Reform: The Disciples of Teresa de Ávila (Amsterdam University Press, 2020).

The author of Famous Adopted People comes to DC on Sun., Oct. 28th, at 5PM!