Does it matter where we write? 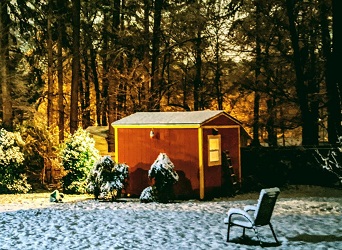 I re-discovered Jill Krementz’s The Writer’s Desk by accident. It was buried in a box, the lengthy shape of its covers unhelpfully sized for any bookcase, which is peculiar for a book of particular interest to writers and readers.

I loved this collection of photos and short essays — showcasing the places where many members of the 20th century’s literary canon composed their most famous works — when I first read it a year after it was published in 1997. That was shortly after I’d realized my own desire to become a writer. At the time, I was utterly entranced by the trappings of the craft, much more than by the craft itself, in the same way someone who’s never been on a court buys an overpriced tennis racquet, or how someone who earns a white belt solemnly declares themselves a martial artist.

I remember the expensive pen from Montblanc and the needlessly but beautifully bound notebooks. All now very likely stored in some other forgotten box.

And, of course, there was the writer’s nook, which had to be perfect, or else how could anything be written? This was before I realized how unimportant that was. Great works, I would learn, have been written in prisons or during wars or through depression.

A book only requires the barest of expenses; the greatest demand is commitment. A desk, any desk, will do. As Kathleen Barber, the wonderful author of Follow Me and Truth Be Told, shared with me:

“I do the bulk of my writing at a small desk in the corner of my bedroom. It’s set up in front of a large window, which is lovely in theory but less so in practice, as I usually have to pull down the shade to avoid being blinded by sunlight (in truth, this is probably better for my productivity; otherwise, I get far too distracted by whatever shenanigans the neighborhood squirrels are up to). On my desk, I keep some copies of my own books to remind myself that I in fact knew how to write a novel at one point in time (some days I need physical proof of such!), a bunch of pens in a mug from my previous career as a bankruptcy attorney with a joke on it that is funny to probably only about 10 people, and some candles, which I light to symbolize that it’s time to stop messing around with the NYT Spelling Bee and get to work. I also usually have three mugs containing a single sip of cold coffee and a fourth that has an actual reasonable amount of coffee inside it (no matter how many mugs there are, however, there is never enough coffee at my desk).”

The Writer’s Desk was one of my first guides into the reality of writing, as important as the first chapter of Sophie’s Choice or those early rejection letters I received in Self-Addressed Stamped Envelopes. There was the messy desk Philip Roth used, alongside his terse essay (“I don’t ask writers about their work habits. I really don’t care.”). Toni Morrison sitting somewhat uncomfortably on a couch. Ralph Ellison at a desk that had the bearing of an office — the extended neck of a lamp, file cabinets — suspiciously regarding the camera.

The photos of an office as a writing space are deeply interesting to me, and I’m not quite sure why. Pablo Neruda wears a suit at a desk as he writes his poetry, and it’s a bewildering image. The great conceit of writing as a profession, after all, is the chance not to wear a suit to work on a daily basis.

But this also may be one of the separations of writing from other arts, the way the structure of its practice often mirrors the image of late-20th-century production: a person sitting at a desk. We often write out of home offices, as Yasmin Angoe, author of the celebrated Nena Knight series, explains:

“My main writing space is my office in my house. On the standing desk, at which I rarely stand, is a gaming computer screen for my many, many, many open windows. There are lots of books, a nice window, and a TV that’s always on because I need places to look and listen to while deep in thought (aka procrastinating). The desk is kind of messy, with lots of Post-it Notes of whatever idea hit me. This space is a sanctuary to me because it has a calming effect; I’ve discovered I need to be most creative in a house often filled with people (not my characters) tirelessly trying to talk to me.”

The Writer’s Desk, with its unsurprisingly poignant essays and politely invasive photographs, is more interesting than it has any right to be. As you pass through its pages, lingering here and there, you realize the unimportance of where someone writes compared to why they write there. Eryk Pruitt, one of today’s great rural-crime-fiction storytellers and the author of the forthcoming Something Bad Wrong, touches on this:

“Back in 2017, my wife and my father built me a small 10x12 cabin [pictured above] in my back yard. I furnished it with an oversized desk, a phonograph player, and a few pieces of art that inspire me. At the end of my desk is a Magic 8 Ball which had actually been used by a homicide detective during his 27-year career of catching killers. It has heat in the wintertime and A/C in the summer. It feels great to have my own space, and it’s the best commute to work that I have ever enjoyed. Inside there, I have written three novels, a collection of short stories, and endless scraps of paper which have ended up in the trash. And this paragraph.”

The test of time isn't pass/fail.

When art gives you goosebumps.