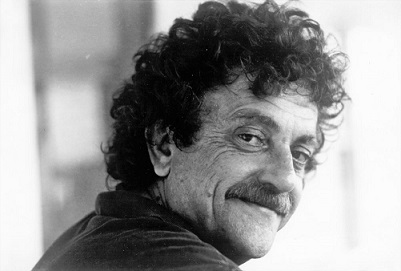 My 20-year-old alternate-universe doppelganger grabbed me excitedly by the shoulders recently. “You’ve got to read this guy Kurt Vonnegut. He sees through all the b.s., he’s funny and angry and sad.” Young Me was really breathing heavily now.

“Read him. Please read him. Start with Cat’s Cradle. It’s kind of like science fiction but it’s not. Graham Greene said it was great, too.”

It’s important to note that my younger self had a few advantages over this year’s model: he was easier to fire up with something new; he was a self-proclaimed very wise college student enjoying everything 1983 had to offer; and he didn’t have to read any Vonnegut novel published after things began to go downhill with 1982’s Deadeye Dick.

The bulk of Vonnegut’s work remains in print. Luckily, just as I was about to drive to Second Story Books in Rockville and buy a pile of gnarly paperbacks, I learned that the Library of America (LOA) has collected and published Vonnegut’s entire novelistic output in four lovingly presented volumes.

The LOA has made it easy to take the journey from his first, Player Piano (1952), to his final call-it-a-novel-because-you-aren’t-sure-what-else-to-call-it, Timequake (1997). The last title bookends his work with the feel of an alternately engaging and infuriating epilogue you might dream if the bedroom were way too warm and you tossed and turned all night.

Yes, Young Me remembered loving 1963’s tragically funny meditation on man’s ability to inadvertently destroy the world, Cat’s Cradle; the struggle with misguided guilt in Mother Night (1961); and the wise and amiable cheer for charity and kindness found in God Bless You, Mr. Rosewater (1965).

As a fan in those days, it was satisfyingly snobby to regard Vonnegut’s critical high-water mark, 1969’s Slaughterhouse-Five, as a good but lesser work when compared with earlier novels. The 1983 me was less keen on Player Piano and The Sirens of Titan (1959), the latter of which was actually pretty close to science fiction.

This time around, 2016 me largely agrees with that assessment of Vonnegut’s early and middle period. The best, especially Cat’s Cradle and God Bless You, Mr. Rosewater, have aged better than I have, and Player Piano remains a clever piece of commentary on how machines were already taking on, and dehumanizing, many of the tasks poor old inferior people had performed for years with admittedly less skill.

Success bred some lackluster offspring, though.

After the fantastically popular Breakfast of Champions (1973), where his alter ego, the hack science-fiction writer Kilgore Trout, figures prominently, what Vonnegut called his subsequent novels read more like chapters in the same long book. The character names change, but an awful lot stays the same. All are written in the first person and usually by someone wrongly accused of some terrible behavior.

Sometimes the protagonist’s got a wife who eventually goes insane. His children won’t speak to him or, when they do, make it clear they don’t like him. He’s endured a parent who pushes him to achieve something great to distract the community from a family shame. He’s usually writing under odd circumstances and/or some affectation: In Hocus Pocus (1990), he informs us the narrator wrote the memoir on assorted scraps of paper he numbered as he went along. Also, “for reasons unexplained [he] let numbers stand for themselves…for example, ‘2’ instead of ‘two.’ He may have felt that numbers lost much of their potency when diluted by an alphabet.”

So what? Why even do this?

There are wonderful sections in these later works, however, especially 1985’s Galapagos and 1979’s Jailbird, but there’s no getting around the fact that Vonnegut’s post-Breakfast of Champions execution can feel a little lazy and even trite. Also, avoid Slapstick (1976) at all costs. Everything that works for Vonnegut at his best — well-placed sarcasm, insightful observations, and a sympathetic consideration of humans doing the best they can — generally fails him here. (Finally, and we can’t blame Vonnegut for this one, but Jerry Lewis made one of Earth’s worst movies based on it, too.)

As the years go by, Vonnegut increasingly got away with things other authors couldn’t because they don’t have the last name Vonnegut (or maybe “Robbins, Tom”). Young Me was more amused with Vonnegut’s literary tics: “Hi Ho” and “And so it goes.” Starting sentences with “Listen” or “Yes.”  Declaring something to be “Oratory in the bow wow style.” Reacting to something odd or horrible with “I had to laugh like hell.”

Yes, I need to take a deep breath and reread what I’ve just written to make sure it’s not a rant worthy of Lewis Black.

I enjoyed significant portions of later works Bluebeard (1987) and Hocus Pocus. I might suggest that the two books could have been better served by being meshed into a single work to exorcise a fair amount of emotional overlap. But in each case, Vonnegut takes us on a pleasant, sometimes profound, and always winding path through yet another flawed person’s life.

Vonnegut’s not here to defend himself, dying in 2007 after a clumsy fall from the steps of his Manhattan brownstone. An affirmed atheist, he would dismiss any talk of an afterlife. Regardless, it’s not difficult to imagine such a devoted fan of Laurel and Hardy looking down and deeply enjoying the way he unceremoniously severed this mortal coil. It happened quickly. He apparently felt no pain. In the final analysis, his death was silly and beautiful in its fittingly final human act of slapstick.

A Farewell to Yarns

When is it OK to quit a book?