Writing is a powerful weapon. Be careful how you wield it. 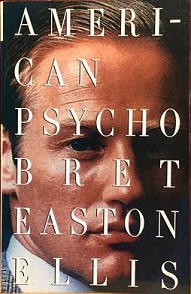 A couple of weeks ago, East City Bookshop had an event celebrating Banned Books Week. I was one of the authors invited to discuss a banned book that influenced me, or had some importance to my writing. I picked American Psycho by Bret Easton Ellis, which is easily the most offensive book I've ever read. Its violent misogyny led to protests from feminists, including Gloria Steinem.

That said, Ellis’ novel is an astonishing foray into the horrible mind of an un-romanticized psychopath, a brutal examination of consumerism, and a brilliant look at the 1980s in America. But despite all that, I doubt American Psycho would be any less criticized if it was published today.

Four years ago, the comedian Daniel Tosh got in trouble for a rape joke, and the controversy launched an angry internet discussion about what was appropriate for comedians to say. I remember a column at the time (which I’ve recently searched for, without luck) in which the columnist listed appropriate ways for comedians to discuss rape.

I remember reading that column and thinking, “Well, this is terrible.”

Any comedian worth his or her microphone was going to look at that list of rules and immediately think of ways to break them. And not just comedians. The minute restrictions are set down in front of artists, some are immediately going to plan how to rebel.

Rules aren’t always dumb, but they’re almost always temporary. A rape joke that’s disparaged today may be praised as insightful years later. The amount of control an artist has over their work is depressingly small when they're alive, and non-existent when they're dead. Just ask Harriet Beecher Stowe.

Abraham Lincoln, upon meeting the author of Uncle Tom’s Cabin, greeted her by saying, “So you are the little woman who wrote the book that started this great war.” Uncle Tom is a terribly disparaging name to call someone, but the book it sprang from was considered revolutionary (that is, until James Baldwin got his hands on it in his famous essay, “Everyone’s Protest Novel”).

I’ve been thinking about all of this recently, given that sexual assault has moved once again to forefront of our national consciousness. And it came largely from a conversation that the speaker, and his supporters, insist was simply “locker-room talk.”

When you write about violence, you’re often asked if there’s anything that crosses your line — that would be too objectionable for you to write. Most writers say they would never hurt an animal or a child in their work. I’ve never hurt a child or animal in my writing but, sure, I would.

I knew a young woman who’d spent years in an abusive relationship and who — a decade later — would hide in her closet when PTSD haunted her. She couldn't go more than a few nights without nightmares. She was a lovely person, which doesn’t matter other than to say that I cared for her a great deal. I don’t talk to her anymore, don’t know how she is. But when I write about people who have suffered, I remember that young woman shivering in her closet, and I know I have a duty to represent suffering as truly as possible. I can’t cheapen her. She deserves more. Victims deserve more. Survivors deserve more.

James Baldwin had another quote that I often return to: “I want to be a good man and an honest writer.” Honesty is always going to subjective, and your view of the world, while true for you, is never universally true; “universal truth” is a lazy artistic cliché.

What you read and write will inevitably change in meaning. But a good artist should realize the importance of what they’re doing, the severity of their words, the indelible impact those words will leave in the minds of readers. Words aren’t empty. A good person knows they may have the power to open that closet door. To help someone stand.

Remember my collaboration, “short stories + music,” with DJ Alkimist? Now we have a newsletter! That probably doesn’t need an exclamation point. Anyway, you can sign up here by tomorrow and maybe win some money.

Cut to the Chase!

It’s what short stories do best.