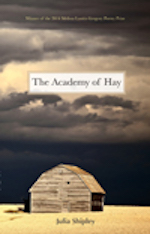 Shipley has transformed the balancing act of farming to high art. I have to say up front: I’m from Trenton — the only farms I saw growing up were when a rich aunt sent us away two weeks every year for a summer camp. I never really respected the habit of hard work and risk-taking with nature; and I certainly didn’t care to try. Yet, I have to say Shipley is drawing me in. Each poem is progressively better at explaining how the land and the soul are one thing. And how important it is to show up to do your best and then do your best —”…Your forefinger pushes the blade/ out of its sheath, you hunch and begin sweeping/ its edge through the slender necks of lettuce…the lettuce stalk weeps a milk sap/ on both ends — the part still rooted and the part freed; / dawn cruises into noon, you have everything you need.” (Sufficiency)

“She paints, she builds, she restores. First, do no harm/”

I say Julia Shipley is famously skilled, a poetry performer with activated intelligence; making poems that intersect beauty, intention and conviction. This book is a success.


She assembles
under my industrious hand:
worried out of occlusion,
beneath my agitated rag,
she grins back from polished steel.


When I reach for her,
she welcomes me;
If I recoil
she’ll flee. 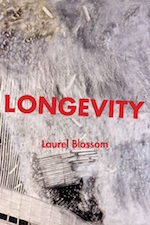 A book-length poem has to be a living thing with expansion and contraction like breath on the page. A book-length poem has to have characters, situation and plot, to keep us turning the page. This, and more, Blossom gives us with her breathtaking leaps of phrase and thought. Being “true to oneself” makes the most tasteful poetry there is and Blossom connects-with each moment- a different feeling. There is artistry in loss, grief, rejection and even the guilt of not loving. The story line of mother, sister (rivalry,) a best friend (lost) — the great singing that brings them all together is wonderful to behold. Moment by moment, you feel it. And it has to do with the tools of esthetics on the page — the spacing, the half phrases, the lilt of what is left unsaid. There’s no better praise than to say we care about Blossom’s people. She makes her words ours. In a book-length poem the speaker has to command the stage; Blossom lets the slow song unfold, and then she “brings it.”

(from Now What) 7 movements

Your mother was depressed, the doctor said, unstable.

Oh, I said. I just thought she was crazy.

Because by the time I wandered in she was frantic.

Because not as usual straight home, school books balanced on my
sixth-grade head.

Because I was supposed to look after my stupid sister.

Because of the terrible Lindbergh baby.

Because it was all her fault. 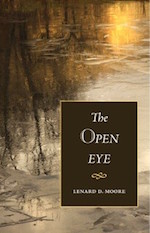 Lenard Moore has devoted himself to the daily practice of Haiku for the 35 years that I’ve known him, and probably before. We’ve all been taught 5-7-5. Forget that. Moore teaches us more than the classics of the short form. He observes the tone and nature as metaphor, yet beyond that, philosophical platforms for brief structures. Of course everyone does not “Haiku” equally well — Moore’s is a journal of the heart. He’s capable, with few words, to create grace. It takes talent to care about complex ideas, and throw them aside to find a reality stated with maximum perception and minimal forms. The Haiku-maker respects being awake to the world so much that he wishes to be precise and focused. This speaks of coherence, and tooling language to make it right with an exact touch. The emerging question is always “What does poetry mean?” Moore shows us how “poetry means” and then he lets us into it. Four Haiku below:

Long after sundown
the sound of ripe plums
plumping the ground

Beyond the graveyard
a turkey buzzard circles
in sudden sunlight

Summer sunrise;
the old woman halts her stroll
to the bird’s song 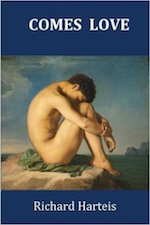 Richard Harteis was partner to William Meredith for more than 35 years. Meredith was a Pulitzer Prize Winner and former U.S. Poet Laureate; Harteis was the devoted man behind the scenes, promoting Meredith’s poetry — and nursing him through a debilitating stroke.

This new memoir adds a degree of difficulty to the star-touched couple. The book is about a triangle and incorporates another companion into their lives — a young Bulgarian who comes to America seeking a modeling job, moving in with Richard and William. Now we have a complicated triangle, and try as you do, there’s always one man out. The book focusses on conflicted emotions, betrayals and unfulfilled longings all superimposed on the constant and lasting relationship of William and Richard. Some monogamists are better at it than others. Richard may cause readers to say TMI because his sweet spots are often hot spots. Richard is not chart chasing, gaining points through sensationalism, he’s just fearless with details of love and lovemaking. This is written by a man who lived on the cutting edge of America’s mores and has felt it all—the emotional arguments against homosexuality — the judgement calls — becoming a warrior in the zone of shame that society inflicts.

The good thing about this book is that Harteis connects to the moment with a kinetic energy to the bone’s truth — complete disclosure and a keen sense of how to describe heart crushing moments. Don’t expect reportage. Harteis takes the scenic route with strong energy and poetry that will make you a believer. Every page is an emotional breakthrough. He can write anything. And this time he does. 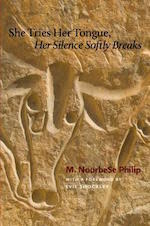 Evie Shockley writes a clear and coherent introduction to a complicated book. These are poems by a writer born and raised in Tobago Trinidad and who also lived in Canada. NourbeSe Philip is a poet with the enhanced knowledge of the sociologist. She uses all edges of language to talk about mother/ daughter relationships, colonialism, slavery, and power. Her complex systems of communication manifest in dazzling poems that attack, seduce and reflect living language — in the author’s own words, language “…encapsulates, reflects, refines the entire experiential and world view of the tribe, the race and consequently of society at large…” (Afterword)

Syntax and semantics don’t sound like the stuff of poetry but Philip makes her way, changing it up with sparkling imagination into her own sound. Believe it, the study of language and its structure has never brought the thunder like this. Each page deconstructs how language manipulates, dominates and cries with anguish. All this, yes, with ingenuity, brains, purpose and talent. We all use words, but Philip proves the secret’s in the sauce.

She Tries Her Tongue; Her Silence Softly Breaks

All Things are alter’d, nothing is destroyed
Ovid, The Metamorphoses (tr. Dryden).

The me and mine of parents
the we and us of brother and sister
the tribe of belongings small and separate,
when gone . . .
on these exact places of exacted grief
i placed mint-fresh grief coins
sealed the eyes with certain and final;
in such an equation of loss tears became
a quantity of minus.
with the fate of a slingshot stone
loosed from the catapult pronged double with history
and time on a trajectory of hurl and fling
to a state active with without and unknown
i came upon a future biblical with anticipation 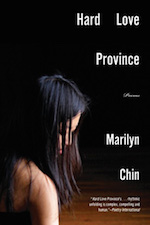 Thank you for this rich mind and for a fearless attitude. The book has six sections, each filled with surprise. These are as much aphorisms as poems because they are philosophical nuggets. The reason they rise above to poetry is the sensuality. (From Two Inch Fables) We met south of the painted wall/ He unzipped his soiled chiton/ I kept my black thong on/ He kisses me hard against the column/ And bruised my arm/ Let’s die, let’s die now/ The Mongols are close on the path/ And there’s no tomorrow.” Some are almost haiku in brevity, nature, “I am a lonely Chinese poet/ sitting on the nether ridge/ You are a Ute Mountain warrior/The sun has begun to set.”

Chin dedicates poems to Adrienne Rich (Every Woman Is Her Own Chimera:) “It’s not that you are rare/ Nor are you extraordinary/ O lone wren sobbing on the Bodhi tree/ You are simple and sincere” and to Don Lonewolf, “…O my mother,/ Let the sunlight erase your final torso./ Let the milk of all suffering/ Fade into the traffic’s clean hum./ Let father’s white suit of sin/ Blanch into my lover’s swooning moans/ and all be forgiven./ Let my happiness blister and counter-glow/ Against your magnificent sick light.” (Alba; Moon Camellia Lover)

Chin’s conjugation of women’s feelings, and conditions are something only she can contribute in her tough respectful voice. There’s not much to hide if you are Chin. And she attacks detail like a warrior princess. There’s no endgame — just concentric circles growing bigger and broader — with every verse a tipping point. She’s Hot. She’s Now. She’s an all-time favorite. Marilyn Chin. What we know about her, bold and brave, is in this book. 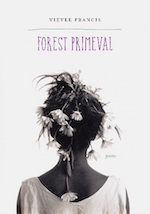 From Fairy Tales to racial myths, from memory to moment, with humanity and dignity, Francis speaks new thoughts. Every part of each poem adds to the meaning — every space, every line break. She is that gifted with something that cannot be taught. Each story is a sleeper cell charged with the capacity to see more. There’s a stunning poem, “Skinned:” Of her grandmother: “…She could skin a raccoon/ in minutes. Revealing the purple flesh easy/ as snapping a guinea neck/… The toil took its toll/ …and though her face barely wrinkled, her knees and elbows darkened/ into the skin I wear now…” Some poems you’ll never forget; each an emotional breakthrough. What is so appealing about Francis is what’s not always visible; for every story’s an intellectual layer of metaphor — and sometimes mischief. You can find your way into that because of the poetic will of this writer, making us hers.

The root cause of poetry is in its anatomy, its contours. Francis uses classic literature references, drawing circles of significance into which the poem fits nicely. Her strong points are desire and capability; but hers are also morality tales. The challenge is making the case while still bringing on Poetry’s Glam. Life experience is Francis’ infrastructure and because of that the world has richer thought than it had before.

There is always a cage at the center, a lockup,
the place you may wind up no matter
how hard you try to follow the straight and
narrow, there’s a jailer with a key and no occasion
prevents the key’s jangling. The boys at a game in Philly,
let’s say, know a few beers could get them put in
that cell, the one kept for the rowdy, the rude,
those who parameters were long ago
shot to hell by a lonely mother, the boys who step out
of line, who won’t acknowledge the fucking line.
Without having laid eyes on the place (you know
the place) you know there’s a dried mattress
and a Styrofoam cup of tepid water. Taste it?
Notice the smell? You’ll worry it’s you,
while above your head, the you you were before
is quoting the score and taking life in gulps,
anxious inside because you knew you
would end up here. You, who never could just
walk away from a too-good thing. You
with something to prove, a drama unfolding
like a thin blanket barely covering the frame.

Grace Cavalieri produces “The Poet and the Poem from the Library of Congress.” Her latest book is a memoir: Life Upon The Wicked Stage (newacademia/scarith).

Review copies should be sent to:

An Interview with Matthew Olshan

Best known for writing YA novels, the author here discusses his acclaimed work of literary fiction.