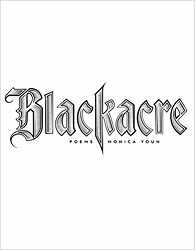 For me, writing a poem is neither an act of rebellion nor an act of conformity; neither a healing balm nor an open wound; neither prayer nor blasphemy.

Writing a poem is an attempt at solitude.

I want, somehow, without the certitude of knowing how or the mysticism of faith, to be inside the poem. Whenever a line or an image moves me deeply, I feel this concentric interiority. I’ve been surrounded, and it echoes the fun and terror living in the voices of characters in an action flick, shouting, “We’re surrounded!”

I struggle to name that feeling. What does it mean to be “between” the conversation of the poem (which is, perhaps, always a conversation with the larger world) rather than to be the poem’s interlocutor? Reading is a kind of eavesdropping, I suppose. And once the reader has stumbled upon something worth the work of patient listening, the euphoria of that moment is the euphoria of solitude.

Two lines from Monica Youn’s “Brownacre,” from her book Blackacre, are pulled up as a reminder not to traffic in cheap epiphanies:

“I wasn’t paying attention: I was watching the thing
you had just said to me still hanging in the air between us.”

Even recently, walking into work, I thought, “If love is to be grand, it must be allowed to be banal,” and quickly crumpled that post-it in the imagination and chucked it toward whatever neuron leaps toward forgetting.

What can I do with that thought other than recognize that something about the word “allowed” and “banal” — its assonance surely — has caught my attention? I want language to do what a photograph does without enacting a memento mori. I don’t want to be profound. I want the poem to place the reader inside of the moment just after a profound thought has occurred, where we are no longer paying attention. Where we are alone.

Turns out, for me, comics, videogames, animation, theater, and the whole cavalcade of nerd-dom also seem to be attempts at solitude. Consider that moment of walking out of a production of really excellent live theater. Sometimes, there are the expected exclaims of, “Wow, just, wow. That was really something to see.”

But, on occasion, the audience is so deeply moved that they can hardly clap for the current call, though they do so out of decorum and to honor the effort of all involved. Still, there is a moment just before the applause when, in a room full of people, each individual is sincerely alone with art.

A counterintuition activates. The experience is closer to the roots of the word “epiphany,” which once meant “the gods have appeared.”

I am reminded of a few lines from Wisława Szymborska’s “The Silence of Plants,” translated from the Polish by the great translator Clare Cavanagh:

“Talking with you is essential and impossible.
Urgent in this hurried life
and postponed to never.”

Writing a poem puts me in that liminal position that feels most akin to the ellipses we call life. Or maybe the better analogy is that of the parenthetical: We are the dash between two dates.

Nothing new there; nothing profound. A little humor then, from Ai’s “Star Vehicle (My Senior Year in High School)”:

“Sometimes I still think life sucks,
but it’s better than the alternative,
which never ends
Thank God a movie does.”

Unless that movie is “The Empire Strikes Back,” and Vader isn’t anyone’s father yet. Paradise as a Saturday afternoon no one’s paying attention to, and that film on in the living room. Everyone is elsewhere, save you in the kitchen making an egg sandwich, having slept late and missed pancakes.

The sizzle of the yolks and the mechanical exhales of a black mask syncopate. Yes, that kind of interiority, that side of the mask, that kind of solitude.

Why I may soon give up Zoom poetry readings.

Comic-book panels, the stanza, and time