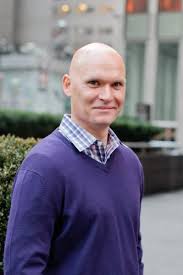 To open a book by Anthony Doerr is to open a door on humanity. No matter what appalling evils surround the characters — including evils in which they participate — Doerr manages to deliver a world lit with love and compassion.

The focal point of Doerr’s new novel, All The Light We Cannot See, is the day Brittany’s Saint-Malo explodes in flames from Allied bombing. The flames are not confined to buildings. A cursed blue diamond known as the “Sea of Flames” not only plays a pivotal role in the book, but also dictates the novel’s structure.

We learn that diamonds are made by “adding microscopic layers, a few thousand atoms every month, each atop the next…That’s how stories accumulate too.” All The Light We Cannot See is comprised of layers of short, truncated chapters, whose accelerating pace parallels that of Europe’s collapse, at times borrowing more from the architecture of short stories than from that of novels.

No surprise, then, that Anthony Doerr is a master of the short story. In his two lyrical and engaging collections, The Shell Collector and Memory Wall, he employs a number of tropes to convey his characters’ compassion and sympathy, themes that echo throughout his work like the repeating patterns on his motivic shells.

Orphans and their passion for nature are among the harmonics and overtones that lend Doerr’s creations their humanity. Here’s the blind shell collector turned healer in the eponymous story: “His fingers, his senses, his mind — all of him — obsessed over the geometry of exoskeletons, the sculpture of calcium, the evolutionary rationale for ramps, spines, beads, whorls, folds.”

In All The Light We Cannot See, young French and German protagonists share a sense of wonder and unbounded curiosity about the natural world. They also share childhoods that are saturated in love despite being orphans. Orphans are vehicles for the never-ending struggle to hold onto, nourish, or discover one’s humanity.

In “Afterworld,” Doerr’s story that bears a faint, precursive resonance with All The Light We Cannot See, the Jewish girls in a Hamburg orphanage are lovingly cared for in the face of mortal peril.

The leitmotifs of nature and orphans coalesce in Doerr’s story “The Caretaker,” in which Joseph Saleeby is a petty thief living comfortably with his mother when Liberia’s civil war orphans him. Saleeby participates in a terrible atrocity and is witness to countless others. Years later, the young Belle redeems Saleeby’s humanity through taking an interest in his illicit garden: “Her pale fingers among the stems, a raindrop slips down the curve of a green tomato, he has a sudden need to tell her everything.”

If this sounds like poetry, it is. Doerr’s facility with language infuses his writing with a rich humanity, including his delicious travelogue, Four Seasons In Rome, recounting his adventures with new twins; and his debut novel, About Grace, in which the hapless David Winkler manages to be lovable despite having abandoned (orphaned) his daughter. Winkler has his reasons.

Against the backdrop of history’s annihilating shockwaves, light is humanity’s trope in Doerr’s most recent novel, All The Light We Cannot See. Sentences shimmer with poetry and meaning, paragraphs are luminous with bright, sparkling beauty; here is light in a thousand crystalline iterations.

“There is no darkness,” protagonist Marie-Laure initially says of her own blindness. Her last name is literally white — “LeBlanc.” So, too, with Werner Pfennig, the German protagonist. Not only does his surname evoke shininess, his white hair “stops people in their tracks. Snowy, milky, chalky.”

The most important light, however, is “the light we cannot see”: the elusive end to an endlessly unfolding war, each month more dreadful than the one before, each new development more horrific than the unimaginably horrific events that preceded it. Thrust into an epic struggle, the characters in All The Light We Cannot See are charged with finding the light within. After that, like other characters in Doerr’s fiction, their generosity is turned toward the great world outside.

Martha Anne Toll’s work has appeared on NPR, in the Millions, and in the Washington Independent Review of Books. She is the executive director of a nationwide philanthropy focused on ending homelessness and the death penalty.

13 Spring Biographies to Watch For

It might feel like winter will never end, but publishers are already shipping out their spring/early summer biographies (normally, the heftiest bios are launched in the fall). And while this year’s release selection isn’t as robust as in the past, there’s still plenty to attract the attention of readers. Here’s a baker’s dozen of new biographies bound to get noticed.