A new book and exhibit at the National Gallery of Art delve into the Louvre’s history to explore just how tastes get made. 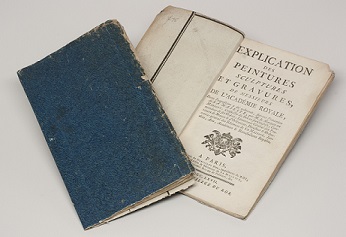 Beginning in 1673, once a year or so, lucky Parisians would tramp into the Louvre to feast their eyes upon the art world’s latest offerings. New paintings lined the walls, sometimes as high as the ceilings, sculptures dotted the floor, and, in later years, other objects d’art filled the sweaty rooms.

The effect was stunning. As art critic Jacques Lacombe wrote in 1753: “What an enchanting spectacle is that ensemble of marvels that meets the glance! The senses at first struck and suspended lose themselves in the midst of astonishing riches.”

These exhibits are known simply as the Salon, and in the 18th and 19th centuries, the Salon rose to become the pre-eminent display space in the world’s leading art city. 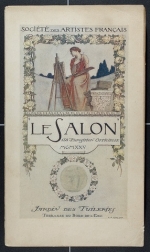 But this show needed a guiding hand to accompany the public through the dense rooms. From the beginning, the exhibition organizers sold a palm-sized pamphlet, or livret, that listed each artwork and, later, as the book expanded, provided illustrations and commentary.

The National Gallery of Art in Washington, DC, has, by its own reckoning, “an uncommonly rich trove” of Salon-related materials, and they’ve put together a little exhibit of their own and a book — Documenting the Salon: Paris Salon Catalogs, 1673-1945, edited by John Hagood — to escort readers and researchers through the Salon guides.

Today, the livrets serve as a record of the changing tastes of the art world and the controversies that accompanied that taste-making. The artists and art forms included in the Salon each year came with the stamp of approval of the elite, and gaining attention at a Salon could make a career.

“She drained the last drops from her glass and set it on the base of a nearby Madonna. An elegant woman in rose brocade sneered at her obvious lack of respect. Camille glared back. She had seen one hundred Madonnas. This one was not so distinguished and neither was it well crafted, but it had been made by a man and that is why it had been accepted. Camille selected another vin rouge from an attendant’s tray.”

Tensions about who was included in the Salon ebbed and flowed in concert with France’s political currents, according to National Gallery of Art curator Kimberly Jones, whose essay in Documenting the Salon identifies “accessibility” as the defining word of the Salon’s 19th-century history. Democratizing trends warred with elite restrictions, and artists debated who merited inclusion in the showcase.

These tensions surfaced in the livrets. In 1848, the catalogue listed the votes each artist received, in a nod toward transparency, and all 5,180 submissions to the exhibition were admitted­ — perhaps the outcome of an open-voting process where no one wanted to look harsh. The result was a chaotic and stuffed show; the following year, the pendulum swung back to a more restrictive Salon.

By 1863, the tensions over curating, as we would call it today, reached a head. The jury rejected a record number of works, and the outcry prompted Emperor Napoleon III to decree a special “reject” exhibit. This Salon des Refusés attracted sizable, if not friendly, crowds, and produced its own livret, which listed such works as Edouard Manet’s Déjeuner sur l’herbe and James McNeill Whistler’s Symphony in White No 1: The White Girl. Both pieces, according to Jones, earned a symphony of mockery from the jeering attendees.

Through September 16th, the National Gallery of Art Library is hosting a small exhibit to display the livrets. Under just two glass cases in the library atrium, these beautiful catalogues give testament to the ever-contentious exercise of adjudicating taste. Though an esoteric book and exhibit on pamphlets from a series of art exhibits might seem irrelevant, the question of who decides which artworks we lionize is deeply pertinent today.

Whose voices earn a spot on the stage? Whose novels deserve to reach readers’ hands? And just what is art these days, anyway? From “Hamilton” to #ownvoices to scuffles between self-published authors and the Big Five, our society is deeply immersed in this discussion. Our creative class struggles with what is “worthy,” or what that even means.

In that context, Documenting the Salon may offer some salve. Discerning beauty is a uniquely human enterprise, and just like anything we set our prehensile paws to, choosing artworks is bound to be messy and flawed.

Such decision-making was difficult when Salon jurors agreed to add architecture as a fourth category in 1793; it was painful when the Salon sparked the Salon de Refusés and drove artists to seek alternative exhibition spaces; it is controversial today. Knowing that history and seeing it represented in these lovely volumes feels, just a little, like forgiveness.

Carrie Callaghan’s fiction has appeared in Silk Road, Floodwall, the MacGuffin, the Mulberry Fork Review, and elsewhere. She’d love to hear from you on Twitter at @carriecallaghan.

Feature in
Art and Architecture More

Barry Millington is the Author of The Sorcerer of Bayreuth: Richard Wagner, His Work and His World.

Feature in
Art and Architecture More

Charles Long is the author of Adventures in the Scream Trade: Scenes from an Operatic Life