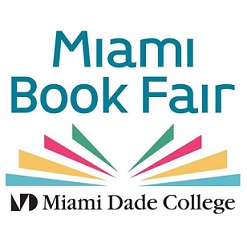 The city of Miami recently welcomed an impressive roster of authors to celebrate the 35th year of its famed Miami Book Fair.

A particularly lively panel included Laura van den Berg (The Third Hotel), Celeste Ng (Little Fires Everywhere), and Curtis Sittenfeld (You Think It, I’ll Say It), who discussed what inspired their novels and how the places where they grew up form an intricate part of who they are as writers. Both Sittenfeld and Ng are Ohio-born, and even though they were raised in very different cities and neighborhoods, they both spoke about their home state’s societal contrasts.

On another stage, Amber Brock (Lady Be Good), Margaret Bradham Thornton (A Theory of Love), and Marjorie Herrera Lewis (When the Men Were Gone) spoke of how their novels were, in a way, statements against the patriarchal values that have, for so long, dictated the rules concerning women. The three agreed that they wanted to write strong female protagonists (Brock described them as “tough to love”) who manage to rebel against what society and their families expect of them and carve out their own destinies.

Jamie Quatro (Fire Sermon) and R.O. Kwon (The Incendiaries) talked to the audience about religion and how it influenced their work in different ways. Both mentioned that, as female authors, they were often asked how their partners felt about them exploring hot-button topics such as, in Quatro’s case, infidelity, lust, and faith. Quatro mentioned that, if she were a man, most likely no one would’ve broached the topic. Kwon added that, because of her South-Korean heritage, she was often fitted into a certain stereotype of what an Asian woman should be.

The event, notable for the many strong female voices onstage throughout, came to a close with book discussions by Meg Cabot, Anna Clark, Chanel Cleeton, and others.

She Says, He Says

Parsing the results of a recent reader survey