Kathy Harig, owner of Mystery Loves Company, writes about four recent mysteries and thrillers that you might have missed.

A Murder at Rosamund’s Gate

I readily admit to liking all periods of historical mystery, but even if this is not your genre, take a trip to seventeenth-century London with Lucy Campion, a chambermaid in the home of a wealthy London magistrate. In Susanna Calkins’ excellently written, well-researched and engaging debut, Lucy confronts murder, scandal, and the plague. Another servant, Lucy’s friend in the house, is brutally murdered. Authorities accuse Lucy’s brother of the crime and march him off to prison where Lucy is sure he will hang. With few others to turn to, Lucy takes on the case.

Europe in the 1600s is fertile ground for wonderful recent storytelling: The Hangman’s Daughter, The Midwife’s Tale, and my particular favorite, John Saturnall’s Feast. To this list, add Calkin’s richly woven tale. War and the plague dismantle some of the previous class barriers, and Lucy boldly engages those in stations far above her own. She rallies her employer’s household and nurses them through the epidemic. Lucy is a spunky heroine and her adventures are thankfully free from the stilted dialogue that often encumbers historical fiction. 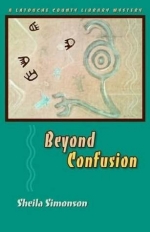 Set in the Pacific Northwest, in mythical Latouche County, Sheila Simonson’s story fit me like a glove: the main character, Meg MacLean, becomes a library branch manager, a position I held for many years. Meg’s library is in a region with a sizable Native American population led by Madeline Thomas, Chief of the Khalos tribe. Madeline and Meg become allies when Madeline offers to donate a tribal building to the town for a library branch.  But the gift is contested by none other than Marybeth Jackson, Meg’s rival for her recent promotion. Vandals attack the recently gifted tribal building, and Marybeth “falls” to her death off her own backyard deck.

Simonson doesn’t shy away from issues such as censorship, bullying, racism and family relationships gone bad. The violence escalates as an angry mob attacks the library bookmobile, a farmhouse is firebombed, and the tension and deaths mount. Although Meg is in a relationship with Rob from the Sheriff’s office, Meg starts her own independent investigation. Beyond Confusion is Ms. Simonson’s “tribute to public libraries.” She paints a realistic picture of the daily life and struggles of a library manager working 24/7 to serve all her varied constituents’ needs and trying to take time for a private life as well.The good news is that there are two previous books in the Latouche County Mystery series. 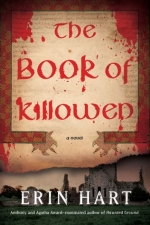 Erin
Hart asks the question: “What sort of book is worth a man’s life?” She answers
that question in book number four of the series featuring archaeologist, Cormac
Maguire and pathologist, Nora Gavin. This gripping and somewhat dark Irish tale
is set in and around the bogs of Tipperary, and based on an actual discovery.
Called to the scene after a century-old corpse is found preserved in the bog,
the team is surprised to find the body hidden in the boot of a late model car.
As Nora carefully extracts the body, she unearths extra appendages beneath it.
The crime scene team is soon called back and Cormac and Nora check into
Killowen, a nearby commune restored from the outbuildings of an ancient
monastery. Killowen’s residents include a variety of artistic types, quirky
agrarians, the local landowner and his daughter.  None welcomes police or media attention.

Nora and Cormac believe the first corpse could be a ninth century Killowen monk and author of heretical philosophy. One of the archaeologists identifies Benedict Kavanagh, a scholar and well-known TV personality who has his own ties to Killowen as the second and more recent corpse.

Hart includes the forensic archaeological detail and Irish lore that make her books so fascinating. Here she adds techniques of the art of exquisite ancient Irish manuscripts, including the use of eels and gall nuts. Hart successfully explores what constitutes good and evil, both in the ninth century and now. The secondary characters are well-developed and engaging. Ultimately, the book is about scholarly obsession.  You’ll remember this haunting story about lives that “are bound together like the spine of a book” for a long time. Hart’s impressive web site, www.erinhart.com explores each book in the series in detail with fascinating history and relevant photos.

Dying on the Vine 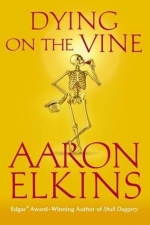 Professor Gideon Oliver, a famous forensic archaeologist known as “The Bone Detective,” travels to Florence to deliver a forensics lecture to the police (Carabinieri). His wife Julie comes with him on this sabbatical and they move into lodgings owned by Julie’s friend who is married into a family of Tuscan wine barons, the Cubbiddus. Nestled among the vines in an ancient monastic setting, the Cubbiddu home, Villa Antica, is an idyllic place for a working vacation.  But less than eleven months before the Olivers’ visit, the Cubbiddu family patriarch and his wife disappeared. When the Carabinieri discover and examine their skeletal remains The Cubbiddu’s deaths are ruled a murder-suicide. Professor Oliver takes up the case and it is soon evident that the Carabinieri got it wrong: both Cubbiddus were murdered.

In the end, Elkins wraps up the mysteries rather neatly but a little thinly and with as many twists and turns as the road to the top of the cliff.  The Tuscan winery and Florence give Elkins ample opportunity to describe art, sidewalk cafes, four-star restaurants, and the grand banquets at the Villa.  And oh the wine… I am sure just by reading one page of this book, I gained several pounds. Elkins doesn’t scrimp on forensic details either and the Italian/America Lieutenant Rocco is a great creation whom readers will want to meet again.

A minor quibble is Elkin’s characterization and language of the Cubbiddu family.  For instance, one of the brothers sings and looks like Dean Martin and the family lawyer comes right out of “The Godfather,” complete with pin-striped suit. Elkins’ intelligent writing and confident forensics sweep the reader into the investigation. In previous adventures, Oliver has been supremely confident; but in Dying on the Vine Gideon is not averse to asking for help when he needs it, perhaps a sign of his maturity. Although the plotting and the characterizations may not be Elkins’ best effort, Elkins is better than most of the field and I am looking forward to more of Gideon’s entertaining travels.

Kathy Harig retired in 2001 after 28 years as a branch manager with the Enoch Pratt Free Library in Baltimore. In 1991, she founded Mystery Loves Company Booksellers, www.mysterylovescompany.com.  Located originally in Fells Point, the store’s current home is a restored bank building in the waterfront town of Oxford on Maryland’s Eastern Shore. Kathy also has a weekly radio program on WCEI 97.6 FM. She is the author of Libraries, The Military, and Civilian Life.