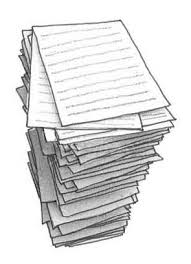 To My Literary Executor:

In light of the recent furor over the publication of a second Harper Lee novel, the tidal swell of snark greeting the announcement of posthumous publications by Dr. Seuss, and taking into consideration the sad mediocrities that were Islands in the Stream and The Last Tycoon, I find it prudent to protect my own literary image.

You, dear executor, may find it presumptuous for an unpublished author to worry about such things (or to even have an executor), but I have every confidence that if I do not achieve success in my lifetime, I will be one of those phenoms, like John Kennedy Toole, who garners literary prizes from the grave. There are certain manuscripts of mine that will win me those prizes, and there are those that will not.

Please, don't do to me what was done to Albert Barnes. Read these instructions and follow them to the letter. My immortal reputation is in your hands.