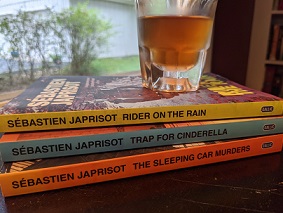 Back in the early 2000s, when I worked at the North Carolina Museum of Art, several colleagues and I started a small book club, the first I’d ever joined. Though we were all big readers, our individual tastes ran in different directions — but that latter point was one we celebrated as a strength. Since we took turns choosing each month’s book, we’d all be exposed to titles we would likely never have read otherwise.

My pick was French novelist Sébastien Japrisot’s The Lady in the Car with Glasses and a Gun. I forget now what internet wanderings had led me to it, but the title caught my attention and the description seemed intriguing, so…why not?

Well, the “why not?” became apparent too late. The book was out of print and there were no copies at any local library, so everyone had to track down used editions online — not quite as easy 20 years ago as now, I should add.

(I’ve actually discussed this novel regularly in presentations on “Book Club Do’s and Don’ts” for both the Fairfax County and Loudoun County Public Library. Spoiler alert: It’s a “don’t” to choose books that people will struggle to find.)

I thought about this story again when three of Japrisot’s other novels landed in my mailbox recently: Trap for Cinderella, Rider on the Rain, and The Sleeping Car Murders — all handsomely packaged English-language editions from Gallic Books to be released in the U.S. this September, October, and November, respectively. (Note: These are not new translations but reissues of earlier ones.)

Japrisot’s work might be best known to American audiences through film adaptations, including the 1983 film “One Deadly Summer,” with Isabelle Adjani, and the 2004 film “A Very Long Engagement,” which marked the second collaboration of “Amélie” actress Audrey Tautou and director Jean-Pierre Jeunet. But Japrisot’s novels themselves are well worth reading for their range and their subtle, even subversive complexity.

His first two crime novels, both published in 1962, quickly displayed his dexterity with form and style. The Sleeping Car Murders is a more classical clue-driven mystery and police procedural: Who killed beautiful Georgette Thomas on the night train from Marseille? And why? Round up the suspects for interrogation. At least until they start getting murdered, too…

Meanwhile, Trap for Cinderella stands as a taut psychological thriller, often impressionistic in its prose. In it, a young woman wakes up in recovery from horrible burns and with amnesia about what brought her to this state. Was she the victim of arson? The arsonist herself? And who is she really?

A search for the truth lies at the core of each book, with shifting points of view in The Sleeping Car Murders and shifting uncertainty about point of view and identity in Trap contributing to what University of Bristol professor Martin J. Hurcombe has called the “narrative labyrinth” of Japrisot’s work.

Along the way, Japrisot cleverly plays with and against readers’ expectations and the traditional elements of genre. He seems keenly aware of potential misinterpretations, and he’s quick to manipulate misdirection and strategize around readers’ assumptions. In fact, one chapter of The Sleeping Car Murders struck me as such a tour de force of both suspense and surprise (two different things, as Hitchcock stresses) that I’m considering assigning an excerpt to students in my “Writing Suspense” course at George Mason University this fall.

The noir thriller Rider on the Rain, originally published in 1992 and focused on rape, murder, and a layering of secrets and lies, was Japrisot’s final book, a novelization of his script for the 1970 film of the same name starring Charles Bronson and directed by René Clément.

Together, these three reissues bookend Japrisot’s extraordinary career — one that’s been long-celebrated in France and that U.S. readers should take time to explore now that these works are returning to bookstores.

As for The Lady in the Car with Glasses and a Gun, there’s a reason it’s not on the list of upcoming titles: That volume has already been released — one of the first in this series of reissues.

Art Taylor is the author of The Boy Detective & The Summer of ’74 and Other Tales of Suspense (Crippen & Landru) and a professor at George Mason University.

Support your favorite local indie while staying safe and social-distancing!

This indie imprint owes its existence to a bar in the desert.