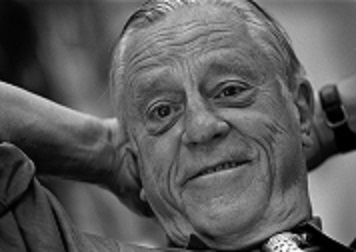 I first met Ben Bradlee — the legendary newspaper editor who died Tuesday at the age of 93 — when I applied for a job at the Washington Post. It was in January 1970, and I’d already been through the gauntlet of interviews with other editors and had apparently passed muster.

Bradlee came out into the newsroom, propped his feet up on a reporter’s desk, and asked not a word about me, but about George Packard, the then managing editor of the Philadelphia Bulletin, the paper I’d hoped to leave for greener journalistic pastures.

Packard, like Bradlee a Brahmin, had been the great hope of young reporters whose enterprise had been crushed under the old regime. We had then what we called a Czechoslovakian spring, alluding to the brief burst of freedom before the Soviet tanks moved in to crush it.

“What the hell is Packard doing up there?” Bradlee wanted to know.

I filled him in. End of interview. I was hired and began a nearly 34-year stint at the renowned paper.

Over the years, Bradlee and I had a passing acquaintance in the Post newsroom. Mostly, I admired him from a distance, though his swashbuckling presence was palpable. He was also, it was said, the source of “creative tension,” a sort of gladiatorial combat he was said to have fostered that pitted reporter against reporter, editor against editor.

It wasn’t pretty and it made for lots of heartburn, but it arguably contributed to the pursuit of excellence at the paper.

After a few years, I rose in the ranks of the Washington-Baltimore Newspaper Guild to become the Post Unit chairman. It was during a time of great labor turmoil at the paper, and large numbers of members had left the guild over a strike by the pressmen’s union that had begun badly, with the presses being torched and a pressroom foreman beaten.

The guild narrowly won a representation election, and we labored along without a contract for years. Somewhere along the way, I was able, in the guild bulletins, to “welcome new and returning members” and to establish a network of shop stewards, among them a rising Metro star named Lynn Darling.

She was also attractive and caught Bradlee’s eye. When he read in the bulletin of her activism and encountered her in the newsroom, he remarked to her, “It must be chic now to be in the union.” Out of that came a button we produced. It said, “Be Union Chic.”

Eventually, we achieved a contract. Not a good one, but a contract. Then came the Janet Cooke debacle, when a story she’d written about an invented 8-year-old heroin addict named “Jimmy” won the Pulitzer. It was all fabricated, including her résumé, and the Post had no choice but to return the prize in shame. It was undoubtedly the lowest point in Ben’s otherwise stellar career.

The paper’s ombudsman at the time, Bill Green, wrote a series of articles suggesting that the newsroom culture had contributed in some way to the disaster, a triumph of glamor over good work. Soon after, at a postmortem staff meeting, Ben and I had a public exchange.

The Washington Star had just folded, and I suggested that perhaps we would all be better off if we focused our competitive urges on other news organizations instead of against each other. Bradlee snapped, “What’s the matter? Don’t you want to be on the front page?” Chastened, I sank into my chair.

Word of the encounter somehow got out, and I received a phone call from Norman Isaacs, a widely respected editor who was then head of the American Newspaper Council, an organization that was trying to establish codes of ethics and accountability in the business.

After I got off the phone, I walked into Bradlee’s office to tell him about it. He was furious that I had spoken with Isaacs and threatened to fire me. But he didn’t really mean it.

“If you weren’t a senior reporter…” he fumed. My defense? At least I’d told him I’d spoken to Isaacs, while other newsroom “sources” might not have. And that was that. Episode over.

Ben could be profane — he was famous for it — but the storm always passed. He did not hold a grudge. Some years later, after Ben had married Sally Quinn, he gave his father-in-law, an Eastern Shore native of Crisfield, Maryland, a copy of my coffee-table book, Chesapeake Country, for a Father’s Day gift and asked me to inscribe it.

Our relationship had turned a page.

Ben and Sally then acquired an 18th-century plantation house on the water in St. Mary’s County. Once Bradlee had become a part of Southern Maryland, he adopted his second home with gusto. (There was a third home, apparently, in East Hampton.)

He served as president of the St. Mary’s City Commission and enthusiastically supported its efforts to unearth archaeological treasures at the site of Maryland’s 17th-century capital. By then, we had bonded over bay country, and when I arrived to cover a story about a leaden coffin that had been unearthed, he was already asking, “Where’s Gene Meyer?” as if my presence were essential to the article.

Bradlee also helped Ken Rossignol, publisher of the upstart tabloid St. Mary’s Today, which I’d written about, gaining it front-page coverage and an ABC-TV news feature. Uncovering corruption in the sheriff’s office, the paper had trouble getting an issue out — deputies had seized all copies for sale throughout the county.

In a way, it was the Pentagon Papers writ small. Ben went to bat for this rogue publisher, whose conservative rants were far from the genteel patrician liberalism to which I believe Bradlee subscribed. He helped Rossignol get representation, and the paper won a major court victory in the U.S. Fourth Circuit.

At the October 2013 Post newsroom reunion, organized to celebrate and thank Don Graham after he sold the paper to Jeff Bezos, Ben was the front-row star. After Don praised him to prolonged cheering and applause, Bradlee said, “I had the most beautiful time — ever!”

I had last seen Ben four months earlier, at a screening of a documentary film on the life of Herblock, the celebrated Post political cartoonist for more than half a century. He was there with Sally, of course, and they had seats in the VIP section close to the screen.

Afterward, during the reception, I went to shake his hand. I later learned he had dementia, and whether or not he remembered me, I don’t know. But he acted as if he did. “Can you believe I’m 90?” he said.

Actually, he was then 92, but who was counting? He seemed just as ebullient and robust as ever — physically shorter, but still a towering figure.

I loved the guy — his unbridled spirit, his passing anger, his boundless energy and enthusiasm. All of it. He was the best of the best. Benjamin Crowninshield Bradlee, R.I.P.

Eugene L. Meyer is a member of the Washington Independent Review of Books’ board of directors.