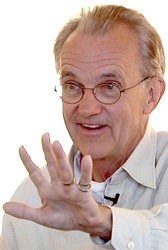 A self-proclaimed expert in “data visualization,” Tufte crusades against “chartjunk,” denouncing complex designs and flashy graphics. Let the content control the presentation, he pleads. To find a presentation format, he recommends searching Google Images for similar presentations. Simple formats allow the presentation of complex data, but don’t dumb down your data. The world is complicated.

One Tufte-approved presentation is the classic French chart of Napoleon’s 1812 invasion of Russia, which merges time, distance (from Poland to Moscow), and military losses in an image that brutally conveys the dimensions of the catastrophe. The width of the top line reflects the size of Napoleon’s army as it invaded. The width of the lower, black line reflects how many French soldiers made it home.

Tufte is a self-publisher, but of the old school. Dissatisfied with commercial publishers, he designed and produced his first book in 1983, giving it a red-hot title: The Visual Display of Quantitative Information. Sold from and shipped out of his garage, the book became a cult favorite, followed by Envisioning Information, Visual Explanations, and Beautiful Evidence. (He got better at titles.)

The books are large, full of intriguing color illustrations, and fascinating. With the playful perversity of a lot of Tufte’s decisions, you can buy them through his website or pay more to get them from Amazon. You’ve got to love a guy who undercuts Amazon.

So, you’re wondering, is he making any money?

Last week, Tufte brought his seminar road show to Washington, packing about 400 people into each of three day-long seminars that cost $380 apiece. The attendance fee included paperback versions of his four books.

Sitting there, I did some back-of-the-envelope calculations. Twelve-hundred admission fees would yield $456,000. The books are printed on thick stock in full color. So let’s figure they cost $18 apiece to produce and ship. (Production costs for regular hardcover books are less than $5 apiece.) Rounding up, that’s about $90,000.

Renting high-end conference space? Call it $100,000. Toss in some overhead. Tufte’s profit margin? Something like 100 percent. He has to show up for the seminars, of course, but it’s worth the trip.

So is this a self-publishing model for others? Sure, for the sale of beautiful, challenging books by someone who spent decades building a “platform” (note use of publishing industry jargon) as the world’s hottest whiz-bang in a field that he invented.

For the rest of us? Not so much.

One last thing. Tufte’s current cause is PowerPoint: He hates it! It’s a time-suck, he argues, that forces roomfuls of people to sit through information they already know or don’t need to know. If I worked at Microsoft, I might lower my revenue expectations for PowerPoint.

David O. Stewart writes fiction and nonfiction. His most recent book is Madison’s Gift: Five Partnerships that Built America. He is president of the Independent.