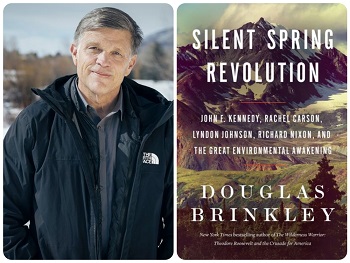 Presidential historian and Rice University professor Douglas Brinkley is also the author of several bestselling books, including American Moonshot: John F. Kennedy and the Great Space Race, The Wilderness Warrior: Theodore Roosevelt and the Crusade for America, and Rightful Heritage: Franklin D. Roosevelt and the Land of America. His new work is Silent Spring Revolution: John F. Kennedy, Rachel Carson, Lyndon Johnson, Richard Nixon, and the Great Environmental Awakening, which Candice Millard calls “an irresistible tale of courage in the face of stubborn, dangerous ignorance and staggering arrogance, peppered with some of the most unforgettable names in history.”