Authors on Audio: A Conversation with Evan Thomas 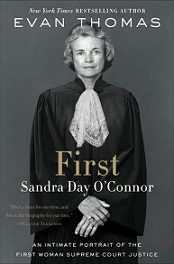 Award-winning journalist/historian Evan Thomas has penned numerous bestselling works, including Ike's Bluff: President Eisenhower's Secret Battle to Save the World, Being Nixon: A Man Divided, and John Paul Jones: Sailor, Hero, Father of the American Navy. In his newest book, First: Sandra Day O'Connor, he chronicles the life of the highest court's inaugural female justice. Thomas recently spoke with author/attorney Talmage Boston about his latest release. Listen to the podcast here. (And click here to read the Independent's review of First.)