As I Lay Trying

Learning to read Faulkner in the era of Black Lives Matter. 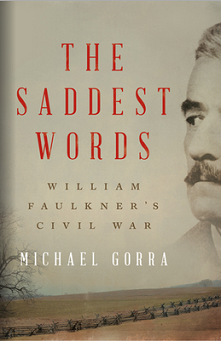 When William Faulkner contemplated compulsory racial integration at the public university in his native state, he promised he would “fight for Mississippi against the United States even if it meant going out into the street and shooting Negroes.” Later, he would claim he was drunk when he made that inflammatory statement. They were words, he said, which “no sober man would make” and “no sane man believe.”

Despite his retraction, Faulkner continued to voice his belief that any move toward basic civil rights for Blacks should happen at a snail’s pace. “Go slow now,” he advised activists.

Faulkner “used racial epithets almost every day of his life,” writes scholar Michael Gorra, and mostly “accepted the whole social order of the Jim Crow South.” But Gorra argues in his book The Saddest Words: William Faulkner’s Civil War that when Faulkner sat down to write, “something happened when he faced a fictional page. The pen made him honest.”

It isn’t that Faulkner did not write racist prose; he certainly did. Nevertheless, his desire to portray the society around him led him to a certain understanding of — or maybe even empathy for — the Black characters he created.

Faulkner’s attempts to craft African American characters sometimes drove him to make choices today’s readers might question. “Faulkner imagines what they might say when there are no white people around to hear,” Gorra explains. At times, the words the novelist puts in Black characters’ mouths seem egregiously stereotypical. But during the first part of the 20th century, almost all Southern writers (Black and white) used similar linguistic conventions, including Zora Neale Hurston and Richard Wright.

Gorra acknowledges that the use of dialect, even when authors intend to show abundant respect, can be problematic. When writers assign dialect to characters from different backgrounds (such as different racial, ethnic, or class backgrounds), they might even violate our contemporary standards of what is acceptable for publication.

“By what right,” Gorra asks, does Faulkner “attempt to represent or to speak for the other, [or] through the other?”

Our initial response might be that when white authors create Black characters and then create dialogue for them, they are employing obvious forms of cultural and linguistic appropriation. Yet if Faulkner chose not to include his version of the voices and perspectives of Black characters — or not to include these characters at all — he would’ve created a version of Southern life that was, as Gorra says, “completely implausible.”

Faulkner might have made an argument for his kind of ventriloquism by arguing that realism required it, but Gorra takes the point much further: Faulkner “could not have depicted the power relations in the society as fully as he eventually did without employing [Black] characters.” Understanding the intensity of brutality would have been impossible for Faulkner if he had never tried to imagine how a Black character would’ve experienced the South’s enforced racial hierarchy.

“Such a writer might have the best of intentions, in his reluctance to seem as though he were speaking for others. Nevertheless, his work would present a vision of society as an all-white fantasy, indeed a white nationalist’s dream.”

Gorra isn’t letting Faulkner and other white authors off the hook here. He shows that what is most problematic is how novelists use stereotypical assumptions and prejudices when they paint their characters. Do they, as Gorra says, “[erect] a hierarchy of representation that replicates that of the social world around [them]”?

If so, their characterizations are probably racist failures. But, in the better cases, these characters might be a starting point for both the author and for white readers to recognize the reality of racist brutality — and also the reality that people discriminated against have “their own lives to make, their own world and ambitions.”

Faulkner was forced to realize that his white characters could never really appreciate or even imagine that Black characters had independent cultures and lives. Trying to include the experiences of Black people required Faulkner to develop a degree of empathy and understanding that he had not felt before. In other words, he had to come to an awareness, at least to some small degree, that Black lives matter.

Faulkner’s critics often point out that this burgeoning awareness is more obvious in his novels than it was in his public life, and more present in his later work than in his earlier books. The novelist’s racism remains apparent, no matter how much readers may find hints of growth beyond the cultural prejudices that shaped his perspective.

Our current discomfort with reading works by racist authors — or misogynist authors, or homophobic or anti-trans authors — is a discomfort which very clearly shows our commitment to justice. Nevertheless, understanding how people in power — people who think of themselves as good and thoughtful — can commit such horrific violence (symbolically and literally) is something we need to examine as we try to move forward.

When authors do this kind of grappling, as Faulkner was doing at least to some degree, it can help us understand how we ourselves might be acting with injustice toward others, even when we think we are being good and moral people. The amazing thing is how much fiction can help us open our eyes.

Hannah Joyner is a freelance critic and an independent historian who lives in Takoma Park, MD. Her academic publications include Unspeakable: The Story of Junius Wilson (with Susan Burch) and From Pity to Pride: Growing Up Deaf in the Old South. She is an editor at the online book review journal Open Letters Review. You can find more of her bookish conversations on her YouTube channel, Hannah’s Books.

Join the discussion of Mercury Pictures Presents in DC on Mon., Aug. 29th, at 7 p.m.!