An Exemplars Special: A New Book by Eva Brann 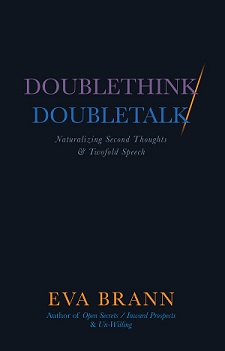 An aphorism, says the dictionary, is “a pithy observation that contains a general truth.” It’s better said (in the book’s footnote about the archaeologist/philosopher Eva Brann) to be “an apt title for the collection might have been potsherds — found fragments, parts of an entirety buried too deep for human digging.”

Philosopher Eva Brann would be the first to refuse hyperbole, especially the word “foremost,” yet she’s considered one of our country’s top thinkers. People far better than I have said this about the Humanities Medal recipient.

Brann’s been honored “for deepening our nation’s understanding of the humanities,” which includes fields of history, literature, language, philosophy, and other subjects. She taught at St. John’s College in Annapolis since 1957 and was dean from 1990-1997.

Each fragment, a point of view, almost fits into the culture of poetry — slivers that reflect an opinion, judgment, or taste. Her remarks come from the iconography of reading and teaching classics as the basis for truth-telling. Each thought is, of course, a tip of the iceberg, and when read carefully, develops new consciousness. It all starts with Brann’s pointed! point of view, and then deepens and broadens to greater expanse.

Definition of post-modern literature: more fun to write than to read.

Are Homeric epics fact or fiction? …All great fiction was fact sometime, somewhere, somehow — All unbeknownst to the poet, who hadn’t gotten it from life. Surely the Trojan War happened, but why necessarily at Troy?

Reading Henry James: Reticence and discretion make for unnecessary complexity and that in turn can make for a good novel — but a long, laborious read of which few details adhere to memory.

Homer’s genius: the modulation of mood through metaphor.

What interests me in these 40 chapters (each titled with BIG IDEAS: “Beauty,” “Death,” “God,” “Identity,” “Work,” “Writing,” etc.) is the portrait of a woman who’s vigorously sharing the inner workings of her mind. What a generous thing.

I enjoy most the unpredictability, humor, and thought-bait. Just when we achieve a sort of balance, Brann may introduce another contour. There’s care and risk in telling everything of what one thinks, and courage, too, because this writer is a translator for others on matters of great literature, society’s foibles, human conduct, and contemporary manners.

Every page is a series of diversified topics. Brann keeps her own professional accomplishments undercover, but her out-of-the-ordinary approach in writing (read her thoughts on teaching, bureaucracy, colleges, and education) proves she’s paid her dues well enough to set existing ideas on edge. Being a great listener in life makes her a great responder.

Each aphorism is a tiny well-framed picture which at once observes and questions the world’s workings with its accumulated intellectual pleasures, beauties, and quirks.

I think of myself as someone whose attention is easy to capture, then why does academic (professional) philosophy put me to sleep? Because it’s a self-nullifying contradiction in terms — institutionalized love of wisdom, protocol-ridden search for truth. And so its formatted humming ipso facto dormitive.

Brann’s chosen the infrastructure of the aphorism perhaps because she knows compression makes for intensity; how to capture the reader with utterance — grace as a beginning and a curtain line for the end. Observation at a glance allows us to pause on the steppingstone to see what might be good and interesting.

This writing doesn’t work as long narrative. (Brann says you can open the book in the middle and read any page.) Aphorisms are an art form, a small drama of intellect — for a moment and just for that time — to savor and relish, object to, or rail against. There’s self-empathy enough in these thought-grams, as well.

When caught committing brilliance, quickly beg the gods’ pardon. — It was but a flash in the pan.

Brann takes no prisoners when she feels she’s tested a principle — she stands by it. You’ll find what reading and writing means. (Middlemarch, for example, is the greatest English novel, and Persuasion the best of Jane Austen. “Don Quixote, a scrawny old geezer with an over-wrought imagination, who’s the archetypal liberal…goes around the world unnecessarily rescuing maidens while joyfully bloodying heads and breaking bones, And having carried on like this through 126 chapters, he recants!)

Against the headwinds of 21st-century Twitter, selfies, Facebook, and avatars, Eva Brann presents the news of the day that stays news. Whereas some writers are over their limit, after 10 books and countless essays and translations, Brann’s at the top of her “A game,” with wry pokes at the cultural properties of our time.

Nobel Prize-winning poet Joseph Brodsky said the only record we have of human sensibilities since ancient times is the poetry. I’d like to think that this book of aphorisms, set in a time capsule, would show the future one person’s attempt at personal intellectual justice — one woman’s life where she had thoughts worth thinking and took them out into the world.

Grace Cavalieri is the founder/producer of “The Poet and the Poem” from the Library of Congress, celebrating 39 years on the air. Her latest book of poems is With (Somondoco Press, 2016).

In Braided Memories, Marjorie Agosín pays homage to her great-grandmother, who escaped Nazi-dominated Vienna and made her way to Chile.

Pieces of the Whole