A poet's perspective on The Collected Poems of Samuel Beckett. 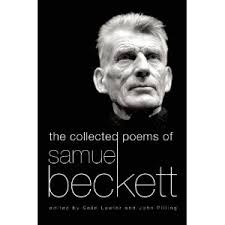 “The best status of all is not to be born.” That was the tenet of Samuel Beckett. And in spite of this, he has transformed theater and dramatic literature for all time. Those who don’t know Beckett probably wouldn’t be reading this, but, in case, a formal bio is better provided by a Google search.

I read The Collected Poems of Samuel Beckett, edited by Sean Lawlor and John Pilling, to understand the essence of this strange genius with his old hymns and new codes — this time, via poetry. The editors write a strong introduction, and their purpose is to create a new doctrine — one where the poems are ordered chronologically for the first time, “broadly reflecting the order of composition when known…while preserving the integrity of previous collections …where these represent SB’s known wishes.”

With respect paid to former publications, Lawlor (recently deceased) and Pilling set out to present their cultural warrior with the optics of accuracy. These editors are serious scholars, and much attention is paid in the commentaries making up half of the book. These remarks present every known fact about the origin of each piece, plus their presentations, productions, and histories — the consummate encyclopedia on Samuel Beckett’s poetry life.

Poets trust people with the truth, so what is Beckett’s “truth”? His personal epic seems to taunt life and death, for he was “from self so estranged,” and since his poetry is his state of mind, you can imagine its font of surprises. Academics note SB’s translations are excellent and of the highest quality.

SB does not take a risk, he is the risk, codifying reality in terms never seen before — treating his suffering with wild exhortations. Part I is titled “Echo’s Bones and Other Precipitates” — Pre-War poems. Here is a middle stanza from Enueg II:

Part I also includes uncollected poems, translations, and poems written in French. This section has SB’s translated works of Eugenio Montale, Andre’Breton, Paul Eluard and Tristan Tzara, among others. The poem “Reminder” by Tzara is very beautiful, and I quote the middle stanza:

“who may tell the tale / of the old man? / Weigh absence in a scale? / mete want with a span? / the sum access/ of the world’s woes? / Nothingness/ in words enclose?”

And in this same section, a poem, where capitalizations (surprisingly) begin each phrase:

Age is when a man
Huddled o’er the ingle
Shivering for the hag
To put the pan in the bed
And bring in the toddy
She comes in the ashes
Who loved could not be won
Or won not loved
Or some other trouble
Comes in the ashes
Like in that old light
The face in the ashes
That old starlight
On the earth again.

Are there any better lines than those above? “Like in that old light/the face in the ashes / That old starlight / On the earth again.”

“That old starlight / on the earth again.”

A note: Among the many pages in The Collected Poems are some “found” poems of Beckett’s retrieved from postcards sent to friends. Some were also scratched on title pages of books sent to friends. Many translations into English from French are the only existing English words of many writers (e.g., poems of Chilean poet Gabriela Mistral, translated for the only time into English by Beckett).

This book is a prism as well as a collection. Since so many great writers are translated into English and French by Beckett, his engagement with the literary world is a revelation — not only rendering contemporary works, but those from other times — from the 18th century, Chamfort.

It was the hope Beckett found in Chamfort’s writing that drove SB to translate the French aristocrat. Our editors define every single change in line or word from the originals, making this book a saga of the re-formulation of poetry through our ages. Apparently, some translations were commissioned, and Beckett needed the money; others are his sacramental and passionate testimonies, preserving poets’ personal epics.

This book is extraordinary. When we think of Beckett, our first thought is that he is emblematic of nothing but himself — a singular giant of metaphor. No. He was active in evolving the history of poetry and its constant development by his interpretations and translations. At the same time, the work affected SB’s own writing. In my opinion, this is quantum mechanics: “When you look at something you change.”

This is the heart of Samuel Beckett. He encircled other writers, yet his own center was that of loneliness. He saw language from other cultures as frontiers, not boundaries. This new book shows a sea change in our thinking of Beckett — his work on other poets contrasted with the singularity of his argument with life.

In the section “Later Poems,” the poem “‘mirlitonnades’ in English” (yes, all those quotes are supposed to be there) is written in English and French. Some stanzas are single lines: “Look in thine arse and write,” and some are philosophical riddles: “Go where never before / no sooner there than there always / no matter where never before/no sooner there than there always”

The Collected Poems of Samuel Beckett is a carefully made book. Its summative power is in showing Beckett’s fundamental beliefs. He is considered the harbinger of hopelessness. Yet it seems that although Beckett continually says death is a part of life, here he attempts to tell us, through poetry, exactly what part that is.

Grace Cavalieri is producer/host of “The Poet and the Poem from the Library of Congress.” She celebrates 37 years on-air. Her latest books of poems (2014) are The Man Who Got Away and The Mandate of Heaven.