The late Stephen Dixon was a true master of his craft. 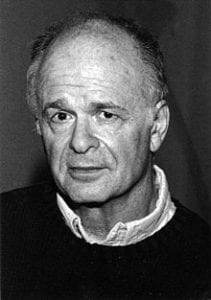 American literature lost a secret master when Stephen Dixon, a longtime professor at Johns Hopkins, passed away in 2019 at the age of 83. Besides being the most consistently innovative writer of his generation, he was one of the most prolific, publishing 18 novels and over 650 short stories in a remarkable career that included two National Book Award nominations; a PEN/Faulkner nomination; and multiple O. Henry Awards, Pushcart Prizes, and appearances in the Best American Short Stories anthologies.

A writer’s writer in the truest sense, Dixon hammered away at a manual Hermes Standard with, as he liked to say, “the two good fingers Parkinson’s has left me,” until the illness finally felled him. Thankfully, devoted fans still have him with us, as posthumous work has begun to surface.

The four stories included in McSweeney’s current issue (#63), taken from among his last completed manuscripts, and introduced beautifully by Porochista Khakpour, are special in that they represent the distilled form Dixon had arrived at after six decades of challenging himself to continually create something original in literature and to find something new in his own troubled psyche.

Throughout his long career, the fidelity with which Dixon’s writing was able to reflect a real, lived life was singular, as were his voice and unorthodox approach to storytelling. Whole stories proceed without paragraph breaks, even for dialogue. The resultant rush of words allows his narratives to become deft surgical knives, cutting straight to the quick of impossible dilemmas.

Dixon crafted texts that were viscerally experiential by dispensing with traditional structure: His characters dream, wish, fret, pretend, and dissemble in overlapping zigzags. They pace back and forth, in and around and over their troubles, picking scabs, and licking wounds to see how they taste.

His most impressive innovation, however, was the development of a point of view that can only be called “the Dixonian First/Third Person,” a kind of collapsing of the “he” and “I” such that the fictional world is as close to personal as it can get, and personal reality contains all the fictions — dreams, desires, manufactured catastrophes, and what-ifs — we construct around actual experiences. Time and space are provisional, oscillating between faultily remembered pasts and invented futures.

The result is an obsessively self-revising text that reflects experience through a funhouse mirror: both truly felt and narratively twisted. At the same time, in his early work, a frenetic exuberance lends his hapless protagonists an almost comic feel, even when their predicaments are undeniably tragic.

In his later work, which is quieter, the need to remember struggles desperately with memory’s inevitable march toward degradation. Past events are endlessly rehearsed and rewritten lest they be forgotten, because each forgotten memory is a fresh experience of loss.

It won’t surprise anyone that a significant thread of random-seeming tragedy ran through Dixon’s life. One of his younger sisters suffered from neurofibromatosis. His oldest brother, an International News Service war correspondent, was imprisoned by the Chinese in 1952. Accused of being a spy, he was held in solitary confinement and tortured for a year and a half before finally being released. Fifty years later, that same brother was killed by a falling tree while jogging.

Another of Dixon’s brothers — the one he was closest to — died in 1960 when the freighter he was traveling on sank in the Atlantic. And the Russian scholar and poet Anne Frydman, Dixon’s beloved wife, contracted multiple sclerosis two years into their marriage and suffered with it for over 25 years before passing away in 2009.

Preceding these misfortunes, Dixon’s father was at the center of a corruption scandal that made the front pages of newspapers nationwide in 1939. Convicted for playing a significant role in a criminal ring extorting doctors in New York who performed illegal abortions, he spent three-and-a-half years in Sing-Sing. (Young Stephen was told he was away in Albuquerque as a colonel in the Army’s Dental Corps.) At age 10, Dixon came across court documents hidden in the basement. It took him several months to read the voluminous material in secret, but he was spellbound by the courtroom give-and-take and he learned the truth.

Perhaps this early collision of narratives was the impetus that led Dixon to become, first, a journalist, and later, a compulsively driven fiction writer. As a reporter, he interviewed the likes of JFK, Richard Nixon, Adlai Stevenson, LBJ, and Nikita Khrushchev. But his love was writing fiction.

In the early 1960s, when Dixon worked for CBS Radio News, he spent his lunch hours working on short stories at vacated typewriters. Hughes Rudd, who would later anchor CBS TV News, offered to send some of Dixon’s stories to his friend George Plimpton. Plimpton chose a story and made numerous editorial suggestions. The piece was reworked several times at Plimpton’s insistence before Dixon, frustrated, sent him the original, unedited version again.

Plimpton accepted the story, congratulating Dixon “for finally taking my advice,” and “The Chess House” appeared in the 1963 winter/spring issue of the Paris Review. This was Dixon’s first published story, to be followed over the next decades by hundreds of appearances in magazines large and small, from Playboy to the New England Review to the Atlantic to — as he once told me — an inflight magazine.

The critic Michael Silverblatt said of Dixon: “He attempts to render reports of unbearable experience. The outside world is calling with its terrors, and he as a writer is responding to the onslaught.” This is certainly true of the stories collected in McSweeney’s, which explore the loss of a beloved spouse and the continuing prospect of aging, alone, with Parkinson’s disease.

The narrator in “Out for a Spin” is able, in fits and starts, to resurrect the love he had for his lost wife by imagining she is still bantering with him as they share a pleasure drive. In “The Lost One,” a widower has been struggling with falling down and injuring his head and wishes he could share his growing concern with his late wife. In true Dixonian fashion, readers are presented seven different versions of the conversations that might take place.

And in “Finding an Ending,” a widowed writer tries, unsuccessfully, to imaginatively recreate a particularly painful moment he’s had with the wife he mourns:

She says “So I’ll see you,” and heads for the door. “Wait,” he says and she says “What?” And he says “You forgot…” Forgot what? Her keys? Wallet? Shoulder bag? A book? Her briefcase filled with… Filled with what? What does it matter what it’s filled with? Just her briefcase. Then, or… Better start again. This happens. I’m not worried. Somewhere out there’s the right ending. It always comes.

In this work, one gets a sense of the realness of the story being told even as the tale emphasizes its own unreality. It is this uncanny ability that gives Dixon his power as a writer: Each of his narratives is prismatic, containing infinite renderings. All of what we’re reading, he seems to be reminding us, like all of what we experience, is just a draft.

Matthew Petti teaches creative writing at the University of the District of Columbia. He is at work on an authorized biography of Stephen Dixon, as well as editing a new Selected Stories of Stephen Dixon, which is scheduled to be released in 2022. Portions of this piece were drawn from previous essays.