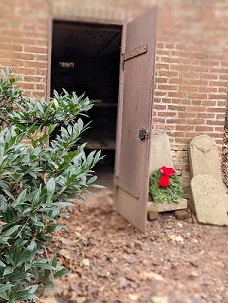 During the early pandemic, grocery shopping seemed death-defying. I preferred a store beyond my neighborhood with wide aisles and well-defined social distancing. Still, shopping left me “stirred with a spoon,” as my Midwestern grandmother would say.

So afterward, I drove a bit further, to walk in Georgetown’s Oak Hill Cemetery, where winding paths slope down to Rock Creek. It was oddly comforting there among the markers, crypts, and blooming cherry trees. Groundskeepers watered and weeded; occasionally there was a funeral in the chapel.

A 19th-century brick gatehouse containing both an office and residence guards the cemetery. I wondered what it would be like to live in this tranquil oasis, to be at home when the gate swung shut. The grave’s a fine and private place, as Andrew Marvell said.

My husband once worked near Oak Hill and recalled a Black cemetery close by. One day, I walked farther and found a handsome sign: “The Mt. Zion Cemetery and The Female Union Band Society Cemetery…Listed on the National Register of Historic Places.” Oak Hill was visible just across a ravine, behind a tall chain-link fence.

Weeds and dirt obscured the headstones, many broken by deterioration or vandalism, sinking into the hillside. Some bore only names and dates of death: the graves of those born enslaved. A few once-elegant obelisks had full dates and references to career and family. Other markers lay uprooted, piled in a corner like a graveyard of gravestones. There were tools and evidence of weeding, but it seemed a neglected, mournful place. All burying grounds are hallowed; not all are fine and private and protected.

Once home, I visited the cemeteries’ website. Then my husband and I attended an online presentation and heard Lisa Fager, director of the MZ-FUBS Historic Memorial Park Foundation, speak of their history and current preservation efforts. We became particularly interested in the foundation’s work designing a database both to document individual lives and to contribute to collective social history.

The original cemetery, called the Old Meth Burying Ground, was founded in 1808 by the integrated congregation of the Montgomery Street Methodist Church. Both whites and free and enslaved Blacks were buried there. Eight years later, Black congregants founded what is now Mt. Zion United Methodist Church. In 1842, the cemetery, then known as Mt. Zion Cemetery, leased half of its property to the Female Union Band Society, a mutual burial and financial-aid society of Black women. When Oak Hill Cemetery was founded in 1848, some white families disinterred relatives for reburial in the new segregated cemetery.

The 20th century saw resources for stewardship decline along with the Black population of Georgetown. The health department condemned both cemeteries in 1953. Decades of deterioration and degradation followed, despite efforts by individuals and groups. The MZ-FUBS Historic Memorial Park Foundation, formed in 2005, is dedicated to their restoration and preservation.

Recently, Fager invited the public to a wreath-laying by the Colonial Dames, DC Chapter, whose holiday wreath sales benefit the cemeteries. She also offered a tour to introduce attendees to some of the cemeteries’ “residents.”

I wanted to go yet felt uneasy. The Dames were raising funds for the cemeteries, but what did the organization represent? My late father — born and raised in Illinois — once said he would disinherit me if I ever joined the Daughters of the American Revolution. Such an idea had never crossed my mind, but apparently his mother had belonged. Perhaps remembering the DAR’s barring of Marian Anderson from Constitution Hall prompted Dad’s unusual vehemence.

His own father, a minister — born in Pennsylvania in 1883 and reared in Tennessee — had welcomed a Japanese American guest preacher to his small-town Illinois pulpit during the era of internment camps. Yet as a young man, Grandaddy put himself through seminary on the vaudeville circuit as “The Man of 100 Faces”; one of them on an old poster is in blackface.

So, my hesitation came not just from assumptions and uncertainty about what the Colonial Dames might represent, but recognition that I don’t fully know my family history. Who may I, unwittingly, represent? Forebears fought for the Union, but is an enslaver’s skeleton in my family closet?

Curiosity and common sense prevailed. We attended the event on a grey, cold December morning and joined a surprisingly diverse throng: Dames and descendants of cemetery residents; families with kids; a group of students; neighbors; foundation supporters; and volunteers (including one with roots in Black Georgetown who first cleaned these gravestones almost 50 years ago as a Duke Ellington high school volunteer).

We sipped hot coffee provided by the Dames and listened to the opening remarks for this, the second annual wreath-laying. The Dames’ national headquarters is next door at Dumbarton House; they’d wondered for years about the neglected cemetery. Encouraged by signs of activity, they responded when Fager reached out. Now a relationship has begun between two organizations interested in family history — and that share some families with intertwined history.

We began the tour, the Dames placing evergreen wreaths on markers as we followed Fager to the burial vault. Built into the slope as a temporary repository for corpses when the ground was frozen, the vault also served as a waystation on the Underground Railroad. Travelers rested and gathered food, clothes, and medicine from offerings left on graves but intended for the living.

I spoke with a young woman who recently joined the Dames; with access to genealogical records going back to Plymouth Rock, she feels a responsibility to determine whether there were any enslavers in her family. If so, whom did they enslave? Were there any abolitionists in the family? Whom did they free? She wants to contribute to filling in the gaps in family histories for those whose ancestors were enslaved. Her mission syncs with the objectives of the foundation’s database project.

(Note to self: Do not make assumptions.) 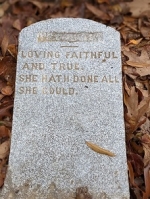 She knelt beside a fallen marker, brushing off leaves and dirt. The name had worn away but not the inscription: Loving and Faithful and True. She Hath Done All She Could.

“An epitaph to Everywoman,” someone said.

The Tomb of the Unknown Woman. One marker to one anonymous woman in a place with many mysteries. The cemetery is a collective monument to people who endured and accomplished, suffered and celebrated, lived and died. Through the work of the MZ-FUBS Historic Memorial Park Foundation and others, overdue light will be shed on these lives, recognition given, stories and graves uncovered. And when we tell stories of the dead, they live on.

Ellen Prentiss Campbell’s collection of love stories is Known By Heart. Her story collection Contents Under Pressure was nominated for the National Book Award, and her debut novel, The Bowl with Gold Seams, won the Indy Excellence Award for Historical Fiction. Her novel Frieda’s Song was a finalist for the Next Generation Indie Book Award, Historical Fiction. Her column, “Girl Writing,” appears in the Independent bi-monthly. For many years, Campbell practiced psychotherapy. She lives in Washington, DC, and is at work on another novel.

In the Night Kitchen

Or, a date with the Perseids.