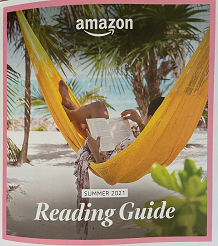 I received a magazine in the mail last week that I wasn’t expecting.

Let me rephrase: I still expect to get other magazines. (You remember those, don’t you? I don’t mean the kind that mass murderers slam into their assault rifles, seemingly on a regular basis. I mean the kind you read. They’re printed on paper.)

I get the New Yorker, People, the Week, Vanity Fair, Florida Sportsman (it has great pictures of fish I can’t seem to catch), Golf Digest (another magazine that highlights my inadequacies), and one or two others that I don’t recall ordering.

The magazine in question was one of those I know I didn’t order. But since it was free, I really didn’t mind. It was titled “Amazon Summer 2021 Reading Guide.” I presume I got it because I self-publish on Amazon. Or maybe because I’m an Amazon Prime member. Of course, being on an Amazon list confers no special honor. Everyone in the solar system is on an Amazon list. Jeff Bezos probably knows what brand of underwear I buy.

At first, I was inclined to skim the Amazon guide and then confine it to the circular file. I was perturbed to see an entire section headlined “The dynamic duo returns,” which wasn’t about Batman and Robin, but rather James Patterson and Bill Clinton!

Apparently, they have collaborated on another “political thriller,” this one entitled The President’s Daughter, with a plot about the kidnapping of a former president’s child. I won’t debate the morality of Clinton writing about anyone’s daughter (or the fact that he really has a daughter, who I fervently hope will never be endangered). Instead, I will concentrate on Patterson, whose stable of co-authors now contains a former POTUS.

I have somewhat mollified my previously uncharitable opinion of Patterson and the millions of readers who would buy anything he writes, including his laundry list. At least they are reading something that helps the entire literary community. And many of his co-authors (Brendan DuBois, James O. Born, Candice Fox, and Chris Tebbetts) may now find an audience they wouldn’t normally.

Anyway, other than the Patterson/Clinton fawning, the Amazon guide contains some great interviews and tips. I’ve read some of the recommended books (Where the Crawdads Sing by Delia Owens; The Splendid and the Vile by Erik Larson, to name two) and can attest to their worth. The magazine also highlights some other interesting fiction and nonfiction works, which I intend to get.

There is even a recipe for “Old Arthur’s Pork Belly Burnt Ends,” excerpted from Black Smoke, by Adrian Miller, which is a history of American barbecue (thank God). And there is a section in which Andy Weir, my favorite science-fiction author (The Martian, Project Hail Mary) recommends his favorite sci-fi novels!

In short, the Amazon summer guide is itself a pretty good beach read.

Lawrence De Maria has written more than 20 thrillers and mysteries available in print or digitally on Amazon. Not only does he have magazine subscriptions, he also has newspapers delivered. You remember newspapers. They are…oh, never mind.